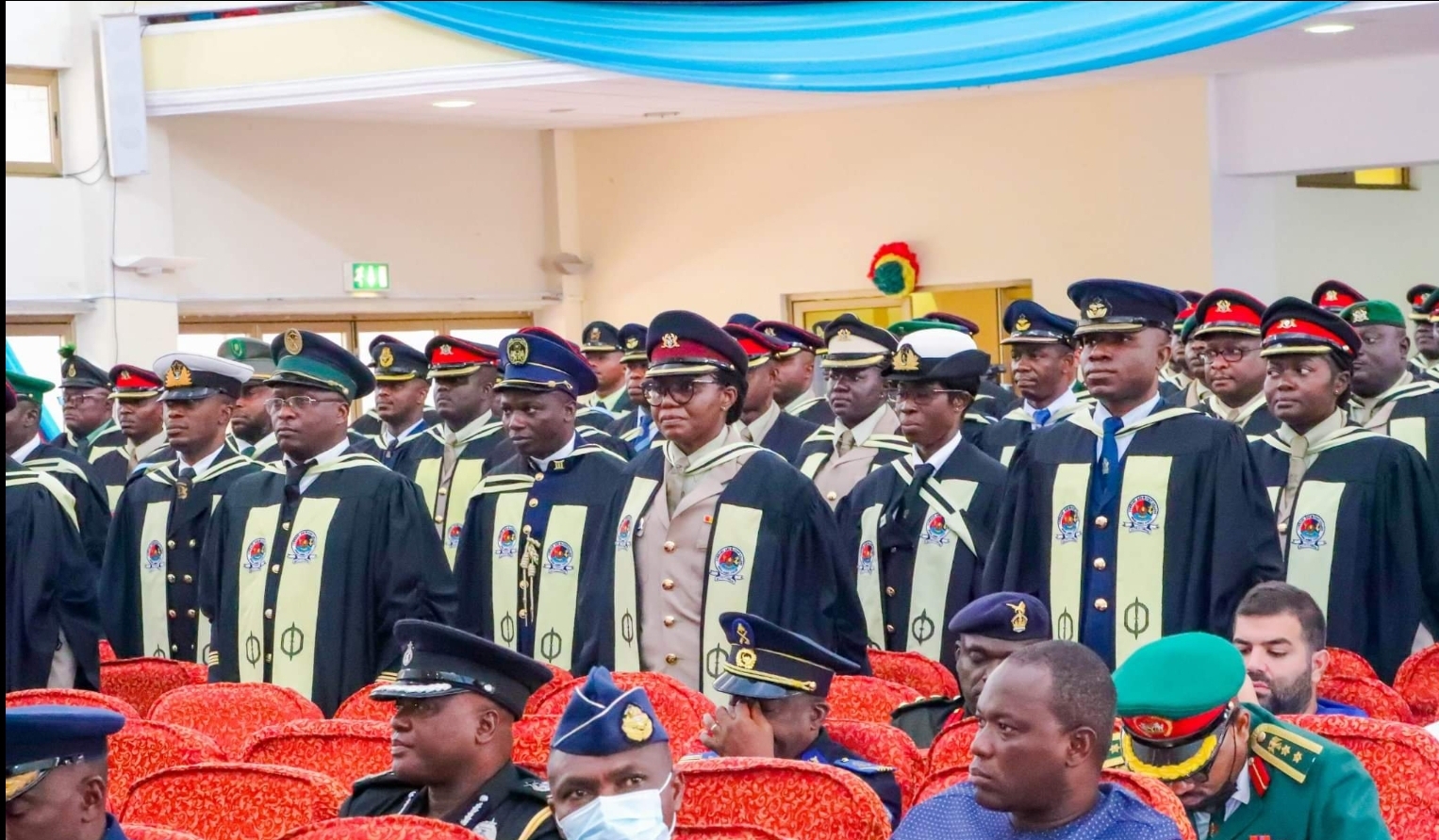 The Ghana Armed Forces (GAF) has been requested to develop and deepen knowledge in modules of learning bordering on digitalization and Cyber Security, and to leverage its prominence to work towards sustaining gains it has already achieved, since the military and technology are inseparable.

The Vice President of Ghana – His Excellency (HE) Alhaji Dr Mahamudu Bawumia made the call as the Guest-of-Honour, at the joint graduation ceremony of the Ghana Armed Forces Command and Staff College (GAFCSC) Senior Command and Staff Course 43 and Master of Science (MSc) in Defence and International Politics (MDIP) Class of 2022, on Friday 19 August, 2022, at the Burma Hall, Burma Camp, Accra.

Describing GAFCSC as a prime national asset with a pride of place in the continent of Africa, he urged GAF to venture into other untapped areas, where the Military has a comparative advantage, as its Military College continues to be the destination of choice and intellectual hub of Military Officers who desire to achieve professional excellence in their respective Armed Forces.

HE Dr Bawumia, who doubles as the Chairman of the Armed Forces Council, said it was refreshing to observe that the College’s vision to run another Master’s programme in Security Studies and PhD in Defence and International Politics is coming to fruition.

Referencing the Military College’s 5-year Strategic Plan, the VEEP averred that if implemented, it would clear the backlog of Officers due for Command and Staff training, and concurrently make room to accommodate increased intake at the Ghana Military Academy, for which reason, he pledged the Government’s commitment to provide the necessary funds to support the expansion of the physical infrastructure and other facilities required for the realization of the plan.

Delivering the Commandant’s Report, the Commandant of GAFCSC – Rear Admiral (R/Adm) Moses Beick-Baffour presented that Course 43 commenced on 10 September 2021, with 85 Officers, 59 of them drawn from the GAF and 26 from 11 other Armed Forces of Benin, Botswana, Burkina Faso, Cote d’Ivoire, The Gambia, Guinea, Liberia, Niger, Nigeria, Sierra Leone and Togo, who graduated with “past staff college” “psc” certificate, and MDIP.

He stated that the curriculum of the College’s program comprised of three components namely; the core, the curriculum enrichment and the academic programs, and under the core program, students are taken through Traditional Military Defence and Security Studies.

As part of the Academic Calendar, the Officer/students undertook a regional study tour of four selected regions of Ghana, namely Ahafo, Ashanti, Northern and Savannah Regions in November 2021, under the theme “traditional leadership and the local system of governance: optimizing progressive coexistence for the socioeconomic development of Ghana”.

Additionally, the students also undertook an African Study tour of four selected African countries of Benin, Cameroun, Malawi and Namibia, in May 2022, under the theme “Multilateralism: a cooperation amongst African states”, to help broaden their outlook in respect of International Geopolitics.

Ghana’s Military College continues to make academic strides both locally and internationally, as a result, the demand for the Command and Staff Course by allied countries is on the increase, as states that have never learnt at the college are making enquiries, with the ultimate intention of sending Officer/students to the college, whiles others who previously had stopped participation, have renewed their interests, reinforcing the fact that GAFCSC is one of the highly patronized Military Colleges on the African Continent.

GAFCSC has projected that both its Senior and Junior Divisions should be increased to one hundred students each by the year 2023, since the three Services of GAF have been grappling with a huge backlog of Officers due for both Senior and Junior Staff Courses, as GAF undergoes its vigorous expansion drive, just as allied countries have also increased their interests in the courses at the Teshie Ridge.

Admiral Beick-Baffour therefore, appealed to Guest-of-Honour to help the College to secure funding for an expansion plan, which have been approved by GAFCSC’s Control Board, a project which would come with its attendant corresponding challenges, such as increase in the strength of the Teaching and Support Staff.
The Government of the United Kingdom, who were sponsors of the various Modules, also sponsored thirteen (13) of the Officer/students.

Dignitaries present included the Minister for Defence and Member of Parliament (MP) for Bimbilla – Dominic Nitiwul, Deputy Minister for Defence, MP for Atwima-Kwanwoma – Kofi Amankwah-Manu, Chief of the Defence Staff – Vice Admiral Seth Amoama, Service Chiefs, Chief of Staff, General Headquarters, Rector of the Ghana Institute of Management and Public Administration, amongst many.