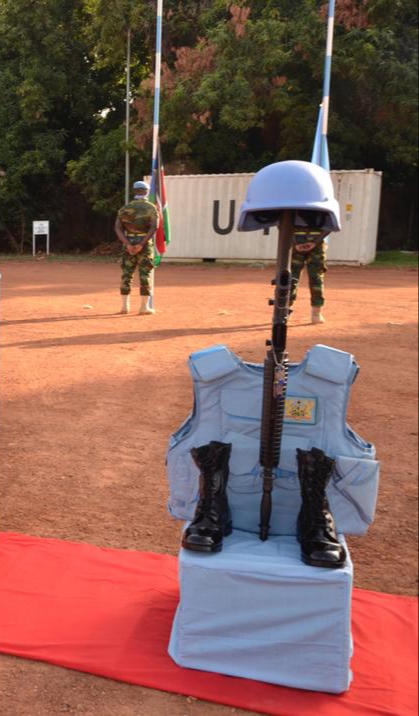 Speaking on Friday, May 29, 2020, on behalf of the United Nations Secretary-General, the acting Officer-In-Charge, Head of Field Office (OIC HoFO), Mr. Sarjoh Aziz Kamara acknowledged the immense contribution of all uniform and civilian personnel serving as United Nations Peacekeepers, particularly those who lost their lives in the line of duty, during the past year.

Addressing this year’s theme; “Women in Peacekeeping: A Key to Peace”, Mr Sarjoh said the role of women in peacekeeping operations, had given peacekeepers greater access to communities, which has enabled personnel to duly perform their mandate and enhanced the overall performance of the mission.

He reiterated that, though there were challenges and threats faced by peacekeepers alike the world over in the COVID-19 pandemic, female peacekeepers were on the frontlines, supporting virus management in an already fragile context, accomplishing that through public health message broadcast, delivering necessary supplies to communities for prevention and supporting efforts of local peacebuilders.

The Acting OIC HoFO opined that, the commemoration of the 20th Anniversary of the Security Council Resolution 1325 on women, hopes to achieve women’s equal representation, in all areas of peace and security, in order to build a better future.

The International Day of United Nations Peacekeepers, marked annually on 29 May, pays tribute to the invaluable contribution of civilian, military and police towards the mandate of the organization and to honor peacekeepers who lost their lives serving with the UN flag since 1948.