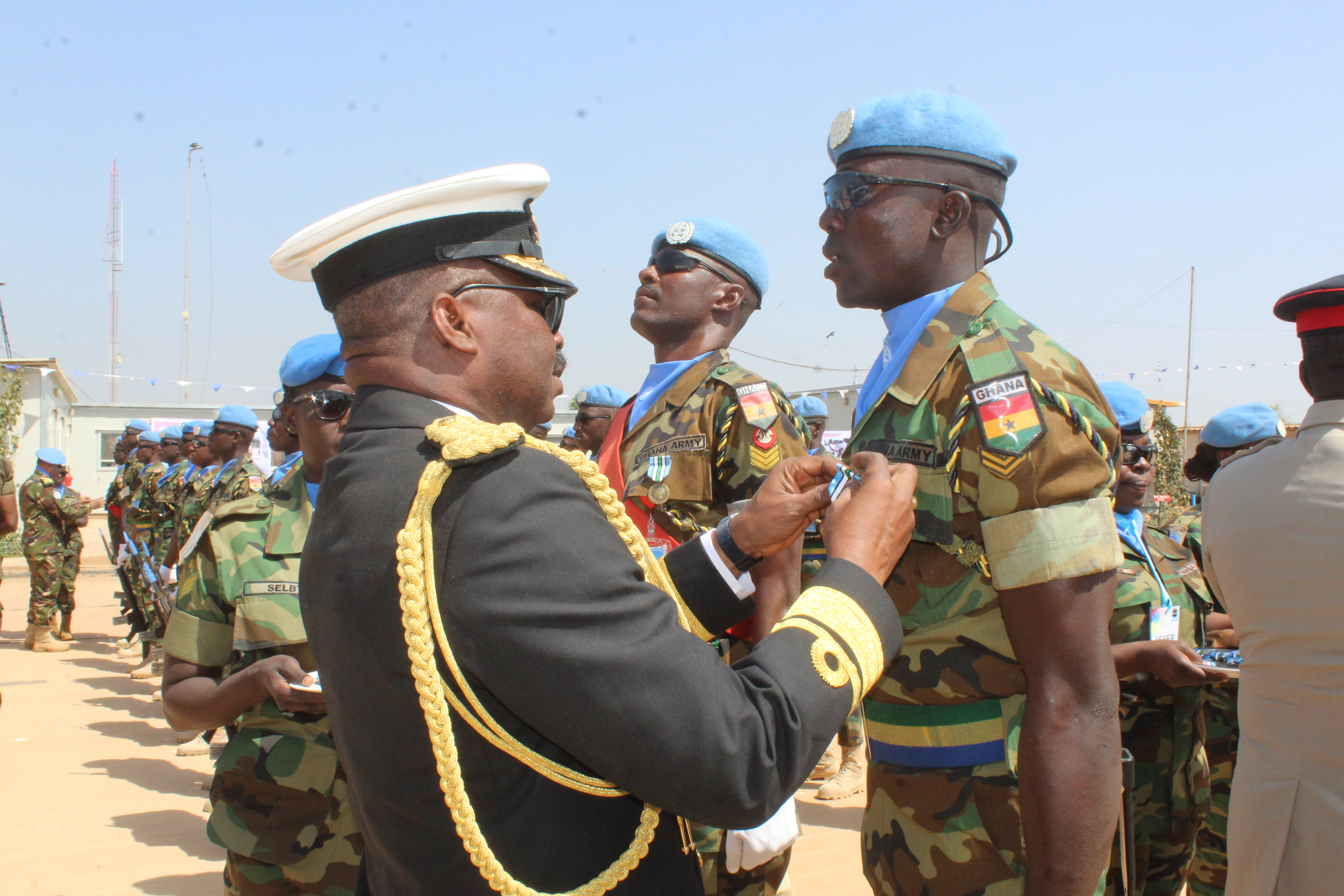 The Ghanaian Battalion serving with the United Nations Missions In South Sudan (UNMISS), UNMISS GHANBATT 7 have been awarded with the prestigious United Nations Peacekeeping Medals, for their selfless sacrifice and immense contributions towards the peace process, in the Republic of South Sudan.

On Wednesday 12 February, 2020 a total number of 698 all ranks, were decorated with the medals, at a colourful ceremony at the GHABATT Headquarters, after having served for the mandated ninety (90) days to be qualified.

In her remarks, the Reviewing Officer, the Head of Field Office for Unity State – Madam Hiroko Hirahara, commended GHANBATT for the high sense of professionalism and dedication to their duty, which has been exhibited over the past 11 months.

Madam Hirahara stated that the performance of GHANBATT had drawn admiration, from both military and civilian components of UNMISS and the local communities.

The Reviewing Officer lauded the Battalion for their Civil Military Cooperation (CIMIC) activities, especially in the town of Koch, further stating that the intervention of the veterinary cell of GHANBATT, prevented an epidemic in the town, which would have caused the loss of thousands of cattle.

Madam Hirahara added that, “The Battalion’s initiative for a flagship football league in the Protection of Civilian (PoC) camp; christened ‘UNMISS GHANPOC Champions League 2019’ was unprecedented, feedback from the community indicated that the league helped empower the youth and improved social life in the PoC site.”

The Reviewing Officer added that the Secretary-General of the United Nations, has a zero-tolerance policy towards Sexual Exploitation and Abuse (SEA) and praised the efforts of the Commanding Officer (CO) in instituting appropriate measures to guard against acts of misconduct.

The ceremony was witnessed by Ghana’s Ambassador to Ethiopia with oversight on South Sudan – Her Excellency Nana Ama Twum-Amoah, a high powered delegation from Ghana led by the Chief of the Naval Staff – Rear Admiral Seth Amoama, the Senior National Representative who also doubles as the UNMISS Sector North Commander – Brigadier General Johnson Kofi Akou-Adjei, Commanding Officers (COs) of various Troop Contributing Countries (TCCs) in Bentiu and Staff Officers serving with UNMISS from other locations, as well as local government appointees.