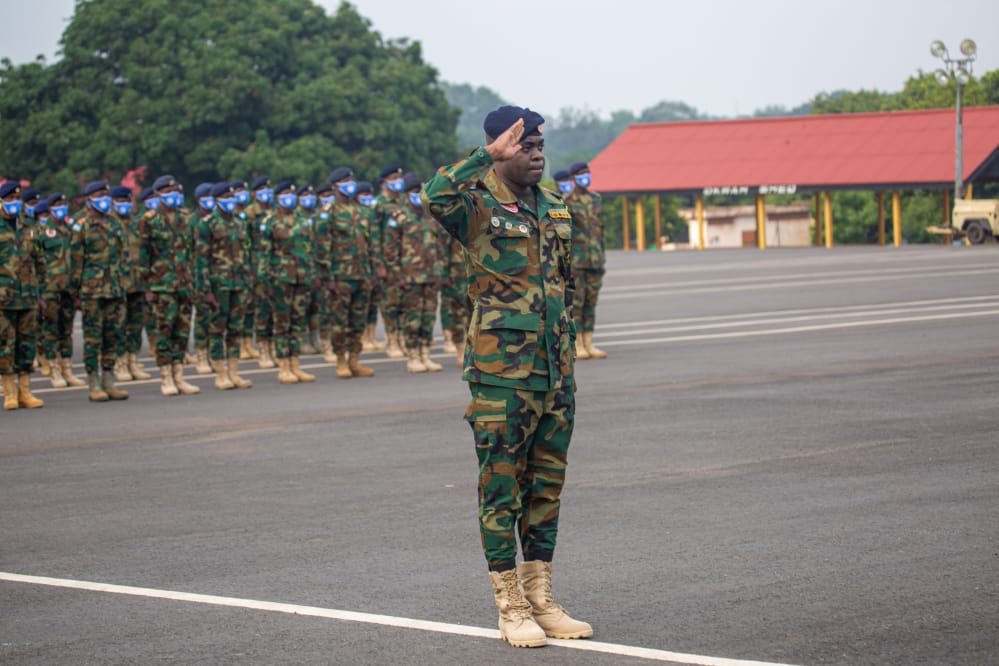 Ghana Battalion 10 (GHANBATT 10) of the United Nations Mission in South Sudan (UNMISS), have held its Farewell Parade prior to their embarking on a one-year tour-of-duty of the distressed East African country.

The brisk parade held on Sunday 21 August, 2022, on the Bailley Base Square of 5 Infantry Battalion (which is a Unit of the Ghana Army), saw a full representation of the UNMISS GHANBATT 10, with the Guest-of-Honour being the General Officer Commanding (GOC), Southern Command (S/COMD) – Brigadier General (Brig Gen) Michael Amoah-Ayisi.

In his speech to the Ghanaian troops, whose core is formed by 5Bn, General Amoah-Ayisi admonished the troops, led by Lieutenant Colonel (Lt Col) Prince Eric Tandoh, to exhibit total trust in and support for their Commanding Officer (CO), whom he described as a thorough professional, whom the Chief of Army Staff (COAS) of the Ghana Armed Forces trusts.

Quoting American Industrialist Henry Ford “coming together is the beginning, staying together is progress, but sticking together is success”, the GOC said that as a team, should they conduct themselves professionally, remain loyal to their leaders, obey command policy guidelines, and exhibit the assertiveness the Ghanaian soldier is acclaimed for in peacekeeping, they were billed to succeed.

Forewarning the Battalion of the toughness of the South Sudan terrain, Brig Gen Amoah-Ayisi told the troops that their human endurance is bound to be stretched and tested, however, they should delve into their recent resource of physical fitness, mental robustness, military skills and positive attitude gained as a result of their pre-operation training and concentration at the Battle Training Camp (BTC), Bundase, Ghana, to succeed in their operation.

Charging every single member of the Battalion to exhibit exemplary and effective leadership skills in whatever position they have been allotted to play, and commending them into Almighty God’s protection, the GOC told them to deliver nothing but excellent success, as he reminded them that their predecessor Battalion had delivered to expectation.