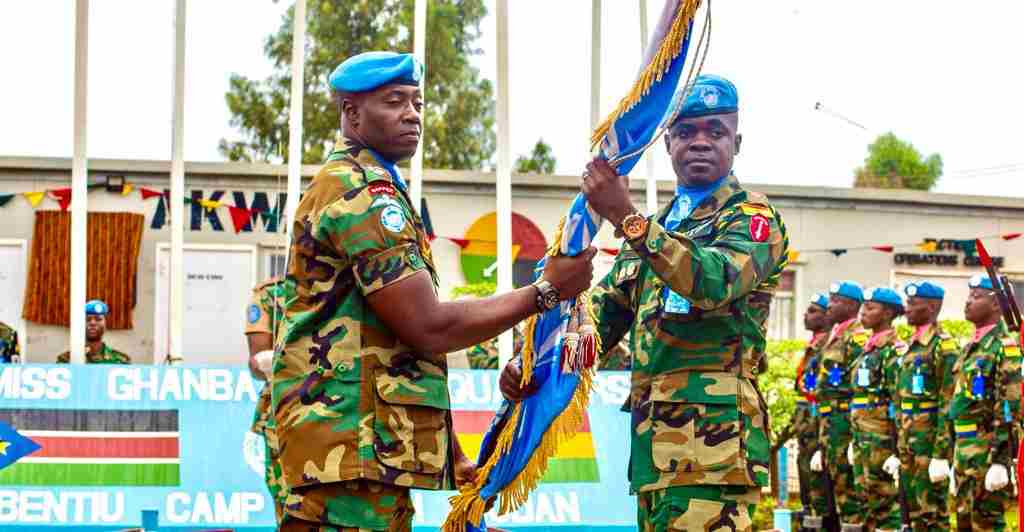 Lieutenant Colonel (Lt Col) Prince Tandoh has taken over as the Commanding Officer (CO) of the Ghanaian Battalion (GHANBATT 10) of the United Nations Mission in South Sudan (UNMISS) from Lt Col Michael Mfum, the CO GHANBATT 9.

The ceremony was held on Monday 19 September 2022 at GHANBATT Headquarters in Bentiu, South Sudan, with a brief but very important ceremony which was characterized by the signing of handing/taking over certificates and change of baton between both COs, followed by the passing of the Pascal Candle and the handing over of the United Nations (UN) Flag, to signify the transfer of command and control of GHANBATT Area of Responsibility (AOR) from GHANBATT 9 to GHANBATT 10.

The Sector Commander – Brigadier General (Brig Gen) Mike Cooper Mujuni, who presided over the ceremony, commended GHANBATT 9 for their professional posture during their tour of duty, and welcomed Lt Col Tandoh, urging GHANBATT 10 to continue the good works done by their predecessors.

The CO GHANBATT 10 – Lt Col Prince Tandoh, in his remarks, indicated that he was privileged and honoured to have taken over the mantle of leadership as the Commanding Officer of UNMISS GHANBATT 10.

He expressed his gratitude to God and appreciation to the Ghana Armed Forces High Command for the confidence reposed in him, while reaffirming his allegiance to the Republic of Ghana, intimating that the task ahead would be daunting, but with determination, hard work, discipline, professionalism and loyalty, the Lion-hearted-led fraternity would succeed.

Lt Col Tandoh further expressed his gratitude to his predecessor for his exemplary leadership and thanked his Key Appointment Holders for their cooperation and commitment during the handing and taking over process.

The new CO presented plaques to the CO GHANBATT 9 and some of his key appointment holders as a token of his appreciation, and additionally assured the entire leadership of UNMISS Sector Unity that GHANBATT 10 would work assiduously towards the attainment of GHANBATT, as part of UNMISS Mandate, as he humbly appealed to the Sector Headquarters and adjacent Units for their support and assistance.

The CO urged all GHANBATT 10 personnel to remain resolute and maintain high standards as professional officers and soldiers to keep the flag of Ghana high, and to climax the event, the GHANBATT 9 Flag was lowered to signify the end of their tour of duty, while the GHANBATT 10 Flag was hoisted to depict the dawn of a new era of Command, which was followed by the unveiling of the Unit logo.

GHANBATT 10, which is expected to serve with UNMISS for a duration of one year, operating in accordance with UNMISS Mandate of protection of civilians, especially women and children, is made up of personnel from various units of the Ghana Armed Forces, with the 5 Infantry Battalion forming its nucleus.

GHANBATT 10 has the motto ‘WE ARE DEPENDABLE’, and pledges to remain ever steady and dependable in its service to UNMISS and the good people of South Sudan.