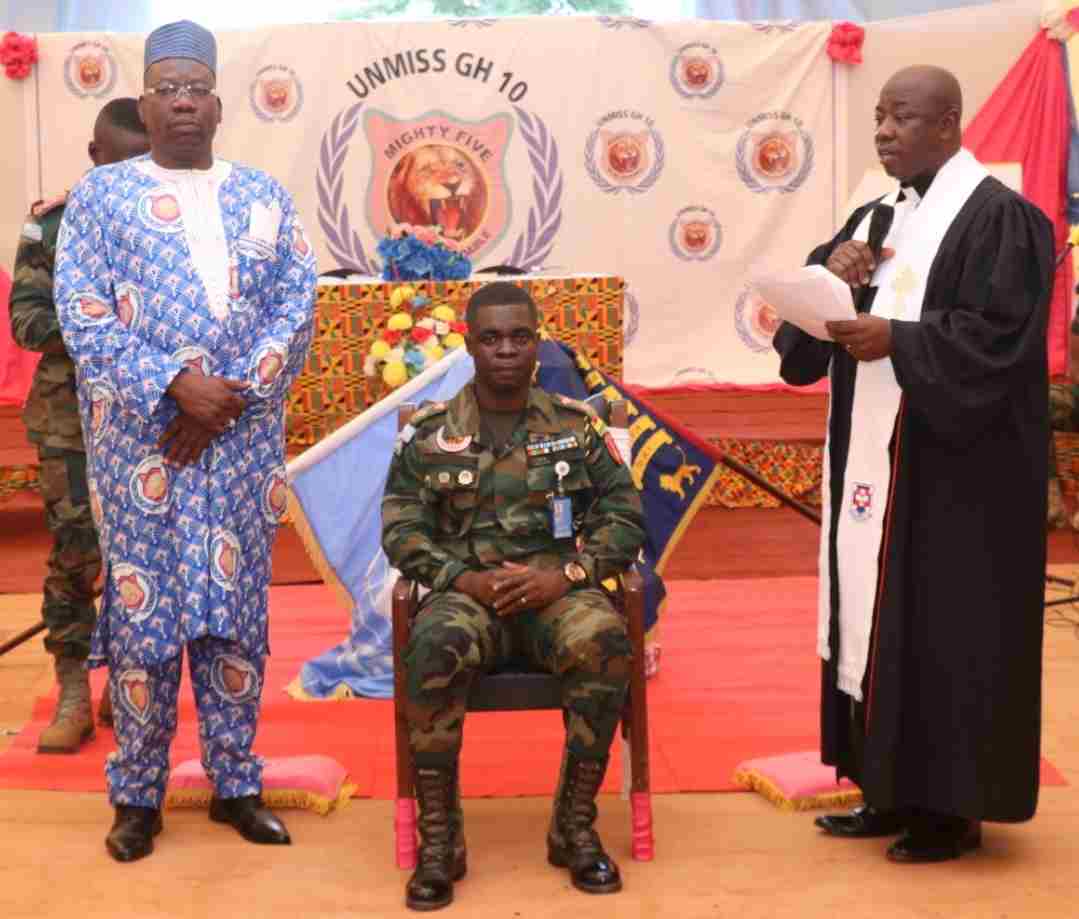 The ceremony on Sunday, 23 October 2022, under the theme: “Everybody needs somebody” was held to officially induct the Commanding Officer (CO) of GHANBATT 10 – Lieutenant Colonel (Lt Col) Prince Tandoh into office and to mark the successful insertion of the GHANBATT into its Area of Operational Responsibility (AoR).

The GHANBATT Chaplain – Captain (Capt) TK Addo and Imam – Warrant Officer Class I (WOI) Abubakar Yusif, in their respective sermons, expressed gratitude to the Almighty God for the successful insertion of the GHANBATT into the AoR and encouraged All Ranks to be each other’s keeper, in order to ensure the success of the GHANBATT.

Capt TK Addo further said that, in line with the theme, the CO will need the cooperation of all on the GHANBATT to ensure the execution of its mission in service to humanity. He charged Lt Col Tandoh to be strong and courageous in the discharge of his duties as the CO of the GHANBATT.

Lt Col Tandoh in his remarks, expressed profound gratitude to God for the opportunity to serve the Colours as CO of GHANBATT 10, and reiterated his commitment to execute the mission of the GHANBATT effectively, in order to give a good account of the Battalion and the Ghana Armed Forces.

He urged troops to contribute their part towards the success of the GHANBATT since the task in the AoR is very challenging. He charged troops to be brave, resolute, dedicated and professional in their service to UNMISS towards the achievement of sustainable peace in South Sudan.

Lt Col Tandoh concluded his remarks by rendering gratitude to the Military High Command, with special mention of the Chief of the Army Staff – Major General Thomas Oppong-Peprah, for his continuous guidance and support of the GHANBATT.

The Sector Commander and Guest-of-Honor for the occasion – Brigadier General (Brig Gen) Mike Cooper Mujuni entreated Lt Col Tandoh to be an upright leader and to focus on leading GHANBATT on the path towards achieving its mission successfully. He further pledged his support to help the GHANBATT execute its mission, calling on troops to put their best foot forward as good ambassadors of Ghana.

The Acting Head of Field Office (HOFO) – Mr Paul Ebikow advised troops to give good accounts of themselves since there is a challenging period ahead, as the UN nears the implementation of the Peace Agreement in South Sudan. He was hopeful that GHANBATT would be victorious at the end of its tour of duty.

Also present at the ceremony were the CO of the Ghana Formed Police Unit (GHANFPU), representatives from the Mongolian Battalion (MONBATT), Cambodia Military Police and United Nations Staff at the Sector Unity Headquarters.