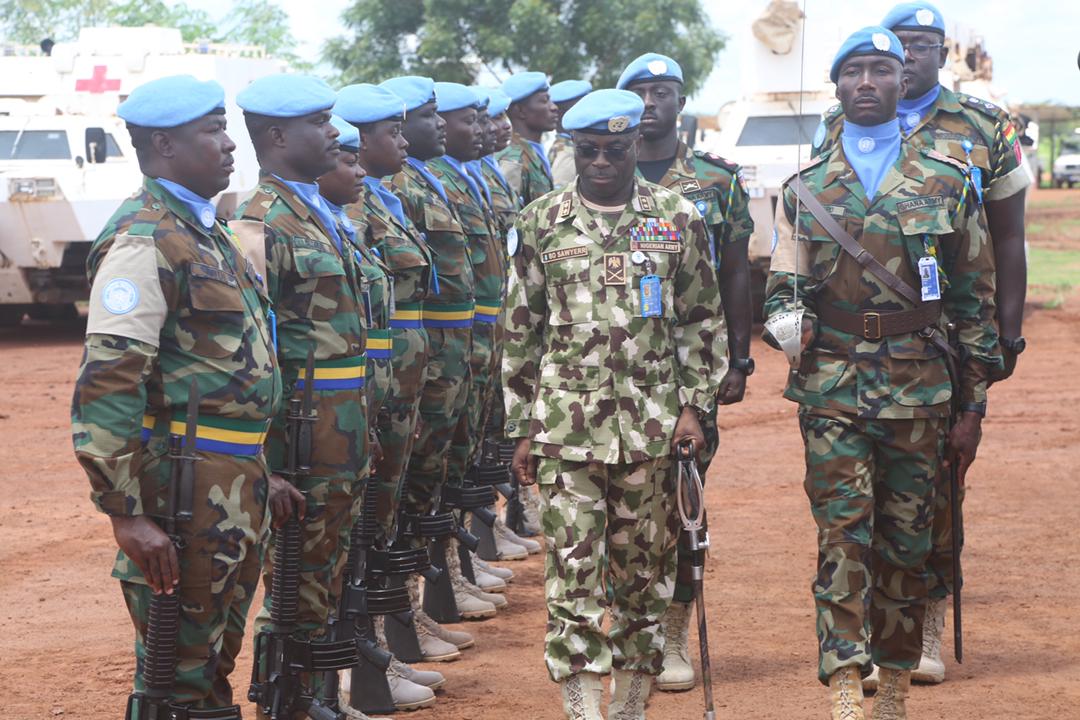 The Force Commander (FC) and the Acting Head of Mission (FC/Ag HoM) for the United Nations Interim Security Force for Abyei (UNISFA), Maj Gen Benjamin Olufemi Sawyerr has lauded Ghana’s first Battalion for their show of bravery in the midst of attacks with limited resources.

He acknowledged GHANBATT’s tenacity and resilience and commended the Unit for successfully repelling not less than ten (10) attacks with no casualty recorded on own troops since inception into the Mission.

He made these remarks when he paid a 2-day official working visit to GHANBATT Headquarters at Athony Company Operating Base (COB) on Monday 25 July 2022, and was given an operational briefing, and attended a durbar with all ranks and a night-stay with the GHANBATT.

On arrival at the GHANBATT HQ, Maj Gen BO Sawyerr was honoured with a special Guard at the ATHONY COB. The Guard of Honour was mounted by 48 all ranks of the Battalion with the Unit’s Regimental Colour and Band on parade.

The visit was the maiden edition of the Ag HoM/FC’s “One Day with the Peacekeeper” initiative aimed at staying overnight at a contingent location while interacting and conducting operations with the host contingent.

Lieutenant Colonel (Lt Col) Eric Kwadwo Aboagye Tieku, Sector South Commander and the Commanding Officer (CO) UNISFA GHANBATT 1 and his Staff Officers briefed the FC and his entourage on the Operational and administrative readiness of the Unit. The FC also joined GHANBATT for physical training activities.

Maj Gen Sawyerr was full of praise to GHANBATT for the numerous activities the Battalion had undertaken in the area of Civil-Military Cooperation (CIMIC), protection of civilians, provision of escorts since assuming control of their Area of Responsibility.

During his interaction with all ranks, he commended the Battalion for ensuring a safe and secure environment in the Sector, and was particularly full of praise for the Battalion for showing bravery amidst the numerous attacks the Unit had to contend with in the quest to uphold the UNISFA Mandate of Protection of Civilians.

He lauded the professionalism of GHANBATT in living up to their assigned responsibilities in helping to fulfill the Mandate of UNISFA, and also expressed his commendation to GHANBATT for the robust CIMIC activities it has conducted to win hearts and minds of the locals within communities in Sector South.

He used the occasion to admonish troops to guard against any act that constituted Sexual Exploitation and Abuse, reiterating the UN’s ‘Zero Tolerance’ against the practice, as he also used the opportunity to remind personnel about the UN Code of Conduct for Blue Helmets urging all to adhere to them.

Maj Gen Sawyerr commended the Commanding Officer by presenting him a plaque and a gold coin for the excellent manner in which he performed his task within Sector South.

The FC also used the opportunity to visit some flash points within GHANBATT’s Area of Responsibility and toured some GHANBATT forward positions.