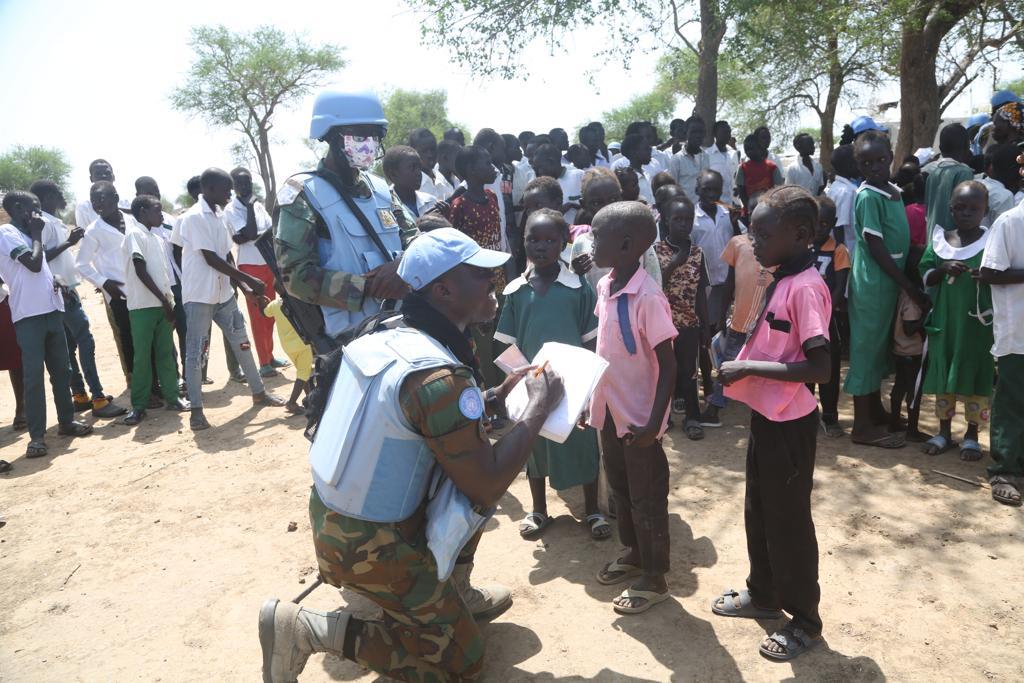 The schools with a student population of over 600 were giving exercise books, pens, pencils, plastic rulers, mathematical sets, erasers, sharpener, crayons, footballs and Jerseys. The donation formed part of the Battalion’s Civil-Military Cooperation (CIMIC) projects and to aid the School Children in their learning.

Presenting the items to the Mading Acheng and Mijak Community Primary Schools on behalf of the Commanding Officer of the Battalion Lt Col Eric Aboagye Tieku, the Deputy Commanding Officer (DCO), Major Enoch Rafik Wehkole Awudu stated that, the donation was part of GHANBATT’s planned Civil-Military Cooperation (CIMIC) and Engagement activities to support communities within the Battalion’s sector.

He encouraged the children to study hard and be obedient, so they become responsible adults in future.

The DCO again appealed to the communities to sustain the good relationship that had existed since the Battalion’s deployment into the area. He assured the community of GHANBATT’s continuous presence through area domination patrols to ensure peace and safe environment to enable them carry out their daily activities without fear.

The head teacher at the Mading Acheng Community Primary School, Mr Ayuel Bol mentioned that, most of the children write on the floor due to lack of writing materials hence the donation came at the right time. He thanked GHANBATT for the benevolence, adding that the items will be put to use for the benefit of the children.

At the Mijak, the Chief of the community, Chief Alor Bagat, stated that since the inception of UNISFA, this was the first time such donation has been made and was grateful to GHANBATT for the gesture.

The head teacher of Mijak primary School, Mr Akuei Fatal Bol was full of praise for the peace and secured environment they are enjoying with the deployment of GHANBATT to the area which had boosted their confidence and subsequently increased enrolment in the school.