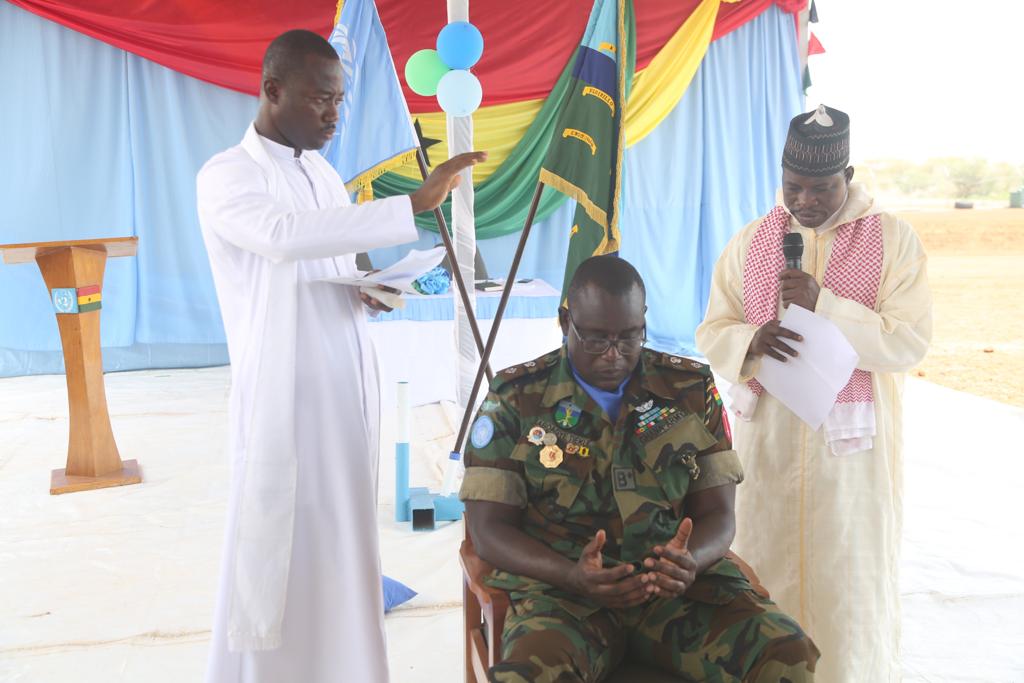 The service was to induct into office the Commanding Officer (CO) Lt Col Eric Kwadwo Aboagye Tieku and also to commit the Unit into God’s care after a turbulent two months of operations.

The service under the theme ‘Possessing the Land’ also witnessed the consecration of the Regimental and United Nations colours. It was officiated by the GHANBATT Imam and Chaplain, Capt Shamsudeen Salifu and Capt Dominic Prince Yeboah respectively.

In his homily, the Imam urged all ranks to place Allah first as they set foot on GHANBATT’s AoR to possess the land and dominate it in the quest to serve humanity.

He drew the analogy of Prophet Joseph in the Quran from his humble beginnings to his servitude in Egypt and ultimately rising through Allah’s blessing to take possession of Egypt and steering it through the great famine.

He likened it to the experience of GHANBATT as the first Ghanaian contingent to step foot in Abyei. The Imam then charged the Unit to take inspiration from the story of Joseph.

The Chaplain in his sermon, expressed gratitude to God for everything that has taken place, acknowledging the circumstances surrounding the Battalion’s deployment to the exodus of Israel to the promised land. He admonished all ranks to never give up as demonstrated by the Israelites in their journey to the promise land despite the challenges. As the first people ordained by God to occupy the land so will GHANBATT succeed as pacesetters in possessing the land.

He further likened the leadership of the CO to Joshua and motivated him that just as God was with Moses and Joshua, God will be with him. He urged all troops to cooperate, support and follow the principles of the CO in achieving UNISFA’s mandate just as the Israelites supported Moses and Joshua.

The Guest of Honour and Contingent Commander, Col Eric Aggrey-Quashie, in his speech reiterated Ghana’s commitment to International peace and security and enumerated the various missions Ghana had deployed in.

He commended the Unit for being the first Troop Contributing Country to deploy during the transition period and indicated that the deployment of Ghana’s Advance Party of 134 all ranks set the pace not only for the deployment of the rest of the Battalion but also serve as the footprint upon which other contingents were deployed.

Quoting from his speech, he said, “Let me commend you for demonstrating unparalleled commitment and enthusiasm in the last two months of your deployment, the constraints of logistics notwithstanding. You have remained resilient and resolute in the performance of your assigned task. I urge you to continue in the same spirit of fortitude, bravery and confidence throughout your tour of duty despite the prevailing security challenges and I also encourage you to remain vigilant, dedicated and professional always”.

Col Aggrey-Quashie reminded the Battalion to be mindful of the dynamics in the Abyei Administrative Area and avail themselves to the opportunities inherent in the challenges the operational dynamics present adding that, GHANBATT should always remember the core task of protecting civilians using every means necessary including the use of force in fulfilment of UNISFA’s mandate.

The Guest of Honour further thanked the UNISFA community for the support given to GHANBATT since its arrival in the mission, stating that, “together, we would create the congenial environment to forge partnership and promote a lasting peace for the people of the Abyei Region”.

The occasion also saw the dedication and official opening of the GHANBATT Level 1 hospital.

The memorable occasion was witnessed by Some staff from the UNISFA FHQ, the Commanding Officers of Ghana Level II Hospital, India Battalion as well as some representatives from United Nations Military Observers (UNMO), United Nations Police (UNPOL) and Ghanaian United Nations staff.