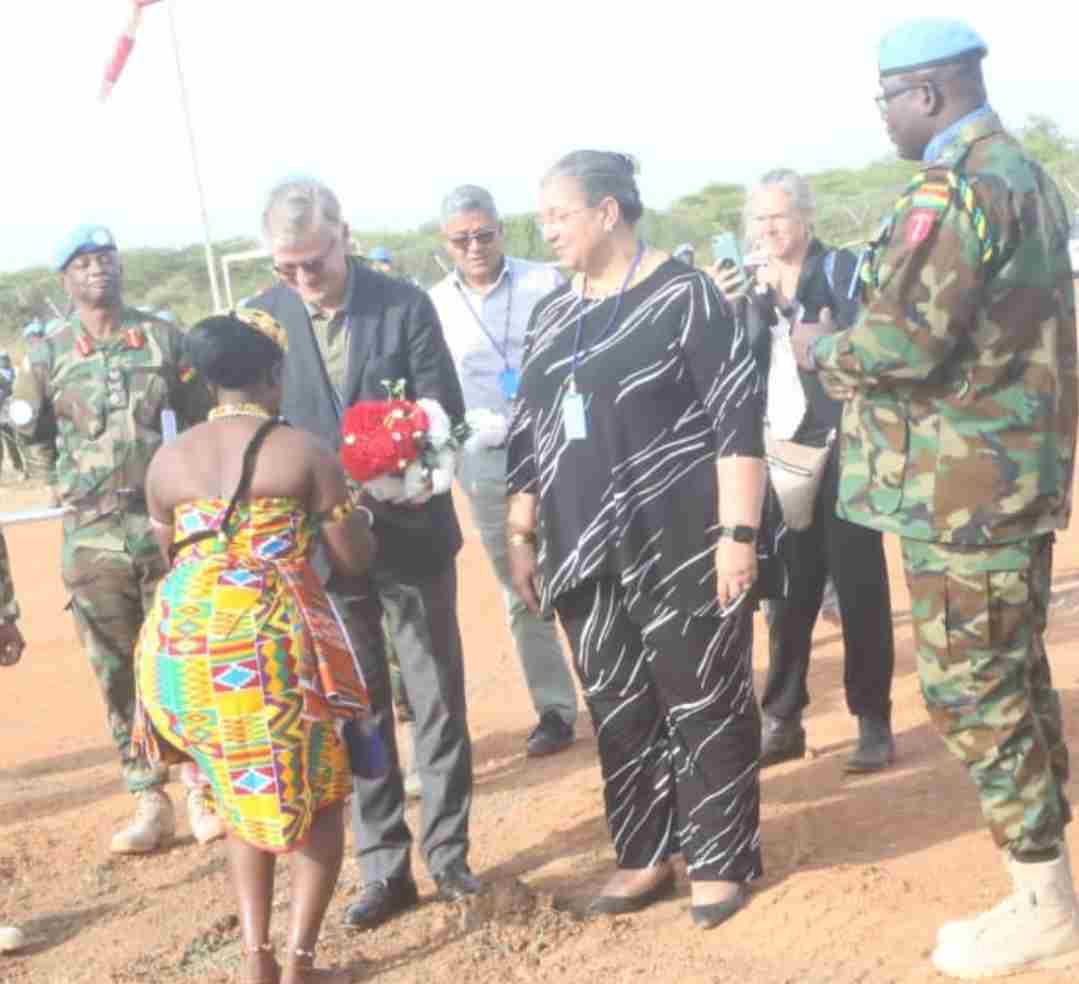 The Under-Secretary-General (USG) for the Department Peace Operations, Mr. Jean-Pierre Lacroix, and Special Envoy for the Horn of Africa Ms. Hannah Tetteh, on Saturday 12 November 2022, paid a working visit to the Ghanaian Battalion (GHANBATT 1). This formed part of his visit to the Sudan Region and the Abyei Administrative Area (AAA).

Mr. Jean-Pierre Lacroix led a 5-member Delegation to visit GHANBATT 1 which is deployed in Sector South of the United Nations Interim Security Force for Abyei (UNISFA).

The visit was aimed at assessing the implementation of UNISFA Mandate by all key stakeholders. It also sought to offer an opportunity for the Delegation to know at first hand key issues within GHANBATT’s Area of Responsibility (AOR) following the deployment of the Unit in the Mirssion since 21 January 2022.

The USG inspected an Honour Guard mounted by personnel of the GHANBATT and was ushered into GHANBATT Headquarters by a brief cultural display. The Commanding Officer of the Battalion and the Sector South Commander, Lt Col Eric Aboagye Tieku briefed the Delegation on operational, administrative and logistics issues within Sector South.

Among the key challenges presented were the inadequate strength of the Battalion vis-à-vis the size of Sector South and the absence of a main supply route linking GHANBATT positions hence impacting operations during the rainy season.

Mr Jean-Pierre Lacroix expressed his appreciation for the in-depth brief received from GHANBATT and further expressed his gratitude to the Unit for the outstanding service and dedication displayed so far.

Interacting with the females of the Battalion, The USG commended Ghana for providing a Female Engagement Team (FET) to serve in such a tough environment and acknowledged Ghana as the first TCC to deploy an FET to UNISFA.

He stated that, the deployment of women in peacekeeping was key to addressing the challenges which affect the most vulnerable in conflicts and offers a most soft approach to addressing conflicts as a whole. He enumerated the immense benefits of relief, assurance, trust and hope witnessed by women and children affected by conflicts at the sights of female peacekeepers.

Ms Hanna Tetteh thanked the Unit for the brief and indicated that it has been an insightful presentation on the magnitude of the Twic and Ngok Dinka hostilities in the AAA. She assured UNISFA of working with relevant authorities in South Sudan to paint the exact picture to help resolve issues at the political level.

She expressed how honoured it has been to meet the first Battalion of Ghana to UNISFA and commended the unit for the wonderful work it was doing in the quest for peace to the AAA.

She urged the Unit to remain professional and continue to raise the flag of Ghana high. During her interaction with the females, she was full of admiration for them and encouraged them to be proud as members of the Unit and the Ghana Armed Forces. She further urged them to be true ambassadors of Ghana by being professional in the discharge of their duties.