The Government and People of Ghana have been highly commended for six decades of constant sacrifice and commitment towards the quest for global peace and security by the Ghana Armed Forces (GAF).

The Special Representative of the Secretary General (SRSG) for the United Nations Stabilisation Mission in the Democratic Republic of Congo (MONUSCO), Miss Leila Zerrougui, uttered the adulation during the Medals Presentation Ceremony organised to honour troops from Ghana serving with MONUSCO.

Paying tribute to UN Peacekeepers globally, Miss Zerrougui singled out “The Black Star of Africa” and emphasized that, “Ghana has never turned her back to the UN for the contribution of troops to participate in Peace Operations since the 1960s, when the first UN peacekeepers from Ghana were deployed to then Congo (now DRC) for the first UN peace operations in Africa.

GAF’s MONUSCO GHANBATT was also highly mentioned for being the first Unit to establish a Female Engagement Team (FET) within their Area of Operations as prescribed by the MONUSCO mandate and in line with UN Security Council Resolution 1325.

Miss Zerrougui acknowledged the deployment of female soldiers by Ghana in combat roles for Long-Range Patrols and also for engaging in critical Civil-Military Cooperation (CIMIC) activities with the purpose of supporting the local people.

The inclusion of female troops for operational activities has facilitated better interactions and boosted the confidence of the local population, especially women and children in the rural communities, towards the UN peace mission.

The Assessment Teams carried out critical tasks related to investigating and verifying possible human rights violations before, during and after the general elections in the areas concerned.

Battalion, which is under the Command of Lieutenant Colonel (Lt Col) Bernard Baba Pantoah, was also commended for the successful execution of their mandate over the one-year period they were deployed within the Western Sector of MONUSCO.

The efforts of the Ghanaian Contingent to cement a friendly relationship with the local security agencies in their Area of Responsibility, pursuant to MONUSCO’s collaborative endeavour with the various security services in the DRC was also lauded.

GHANBATT, through the professionalism of the troops and deep appreciation of the conflict situation in the DRC, assisted to successfully oversee the general elections of the DRC, thus fulfilling an important aspect of the MONUSCO mandate under United Nations Security Council Resolution 2409 (2018).

The ceremony was well attended by the DRC Diplomatic Corps and Ghanaian community in Kinshasa. 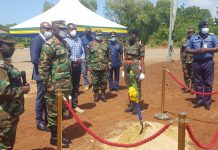 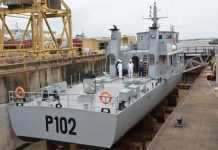