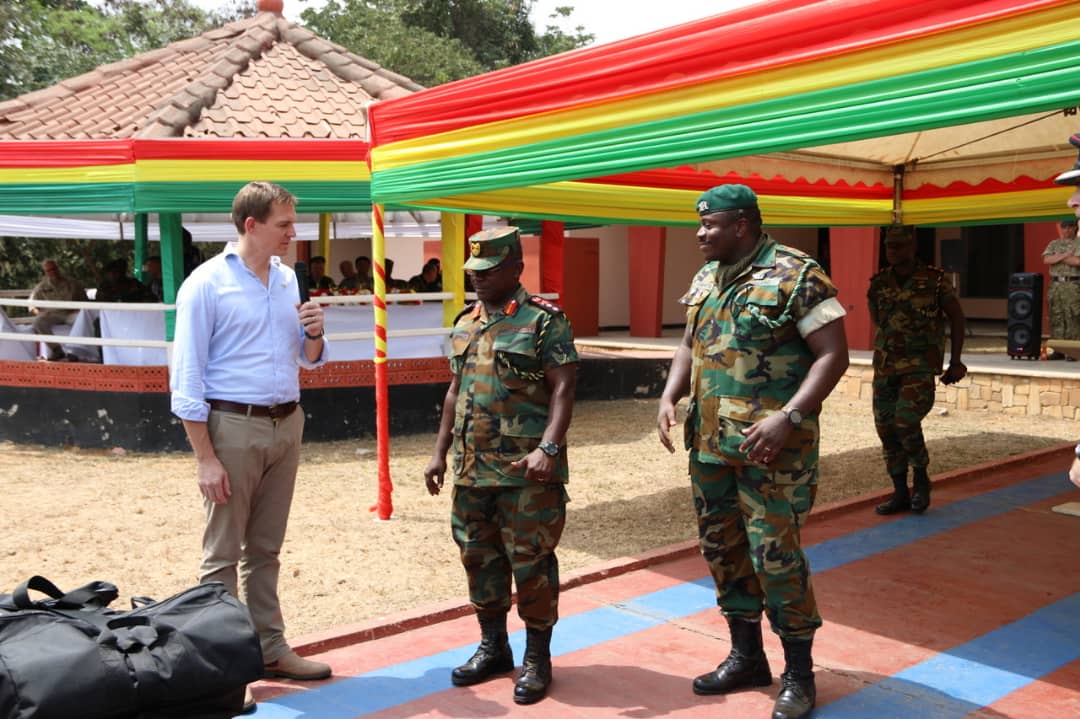 The government of the United Kingdom (UK), through its High Commission in Accra, has presented six (6) sets of counter terrorism equipment to the Ghana Army and the Ghana Police Service to support 64 Infantry Regiment, 69 Airborne Force and the Police Counter Terrorist Unit (CTU), in enhancing their intelligence and operations to develop the core strategic understanding and capacity to counter violent extremism.

The presentation of the Mobile Close Quarter Battle equipment on Friday 28 February 2020, at the Headquarters Southern Command, Accra, forms part of the official closing ceremony for a two (2) week UK sponsored Joint Counter Terrorism Training Course, for 60 Army and Police personnel in Accra.

The Deputy UK High Commissioner to Ghana, His Excellency (HE) Thomas Hartley, who presented the equipment, on behalf of the High Commissioner – HE Iain Walker, in a remark, indicated that the UK has recognized Ghana’s leadership, at setting the standard for security and counter terrorism in the sub region, hence the partnership.

HE Hartley added that, over the past year, the Ghana/UK partnership has seen the Joint Counter Terrorism and Advisory Training Team (JCTATT) deliver courses across the country, with 100 members of the Ghana Armed Forces (GAF) attending courses in and outside the UK.

The Chief of the Army Staff (COAS) – Major General (Maj Gen) Thomas Oppong-Peprah, who received the equipment on behalf of GAF and the Minister for Defence – Hon Dominic Nitiwul, expressed profound gratitude to the UK, for the long-lasting relationship, which he said, continues to yield positive results for both countries.

The COAS indicated that the equipment had come at an opportune time when the shores and boarders of Ghana are beginning to experience pockets of extremist activity, and further expressed optimism that the equipment would be put to good use.

Since 2017, the UK has delivered 35 weeks of counter terrorism training to 706 security agents on 16 courses, and the 6 sets of equipment, will be distributed equally among the 64 Infantry Regiment, 69 Airborne Force and the Police CTU, to enable further training at the unit level.