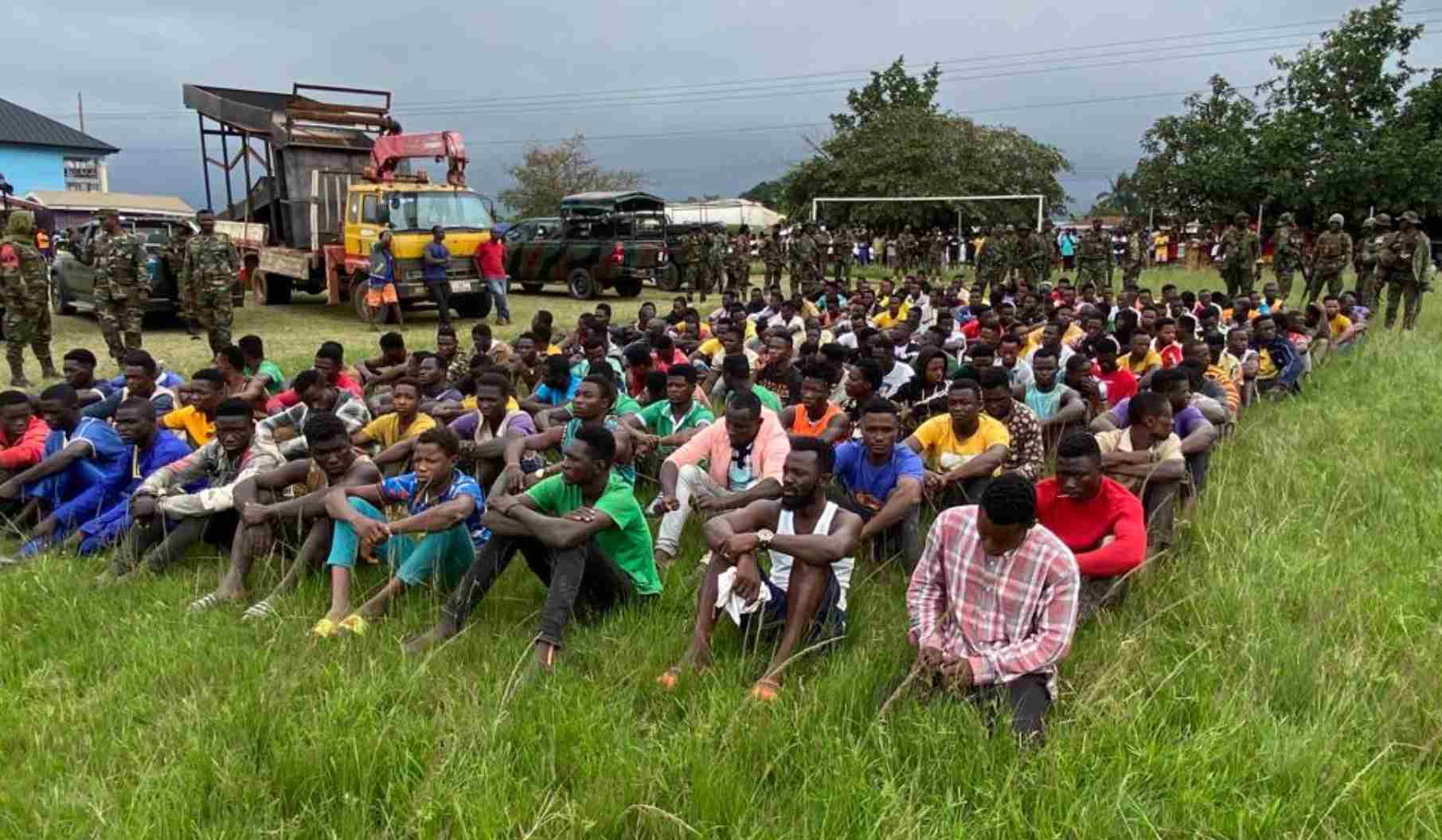 Troops from Southern Command, a Formation of the Ghana Army (GA), on anti-illegal Operations under OPERATION HALT II, have arrested a total of One Hundred and Sixty-Seven (167) suspected illegal miners, majority of whom are suspected to be West African nationals, with Ghanaians.

The ongoing operations – led by Lieutenant Colonel Harrison Dadzie – which commenced in the Atiwa, Tumfa, Bonsa, Anyinam, Asaman-Mampong and Asaman-Tamfoi areas, in the Eastern Region of Ghana, have led to the arrested persons being sent to Accra, on Thursday 15, September, 2022, where they were temporarily screened at the El-Wak Stadium, and thence to the Ghana Immigration Service (GIS) Headquarters, North Ridge, Accra.

The 167 illegal-mining suspects were apprehended and shovels, head-pans and heavy-duty batteries seized, in areas they have illegally created as make-shift residences, from whence they commute to the reserves and fields, where they are provided with metal detectors by influential persons, to undertake their activities, after which the detectors are retrieved by the resource persons till the next working time.

Among those arrested were five (5) females who claimed they were Nigerians who were not illegal-miners but providing needed sex services to the squatters upon request, after they retire from their nefarious activities.

Inhabitants of the areas where the operations were undertaken, complained to the military personnel that they feel threatened by the presence and activities of the squatters, as they destroy their farms and desecrate sacred places, to the extent that they feel uncomfortable living in their own villages, pointing accusing fingers at some chiefs and other powerful persons from outside their communities, as being sponsors of the illegalities.

An uncomfortable circumstance, however occurred in Accra where when the suspects were sent to the GIS Headquarters in Accra, the authorities temporarily rejected custody of the suspects, with the reason that proper prior arrangements had not been made.

The situation changed when the Deputy Minister, Lands and Natural Resources in-charge of Mining – George Mireku Duker, made arrangements and all the suspects were accepted to be properly screened and other legal procedures followed.

Present at a temporary screening procedure at the Elwak Stadium, Accra were Officers from the Ghana Armed Forces, GIS, Lands Ministry and the Chief Executive Officer of the Minerals Commission – Martin Ayisi.