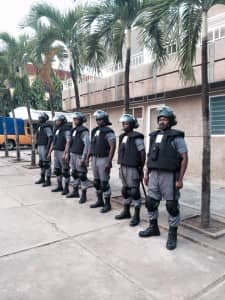 The private security industry is a constituent of corporate security, investigative services, security guard services, with some armed by permission and others unarmed.

In some cities, the crime rate is so high that the citizenry is afraid to go out to perform their routine activities, whiles corporate bodies, institutions and private individuals who can afford, have contracted the services of private companies, to protect their assets and lives.

Companies recruit and train their own security or contract other security companies for the aforementioned services, yet, most security companies do not do well live up to the expectations of their clients; and this reflects in the attitude and work output of the former’s staff. This lapse has augmented the security shortfalls, which are created by inadequate personnel and resources from the state security agencies, especially the civil police.

The global level of unemployment is very high and continues to rise, due to economic slowdown and as a result, governments are not able to absorb the increasing graduate population, into employment, for governments are overwhelmed by rising unemployment, which is a security threat in itself. The private security industry, thus provides employment to the populace and hence has helped to some large extent, in many countries.

Taxation is a major source of revenue for governments, the world over, hence players in the private security industry, paying their taxes, helps to increase the government’s revenue.

The expanding private security industry, is a cost saving for central government, for in the advanced economies, prison escorts, prison security and protection of critical public infrastructure, has been outsourced to private security companies. Although governments pay these companies for the services, the services they provide are relatively cheaper, as compared to what government would have incurred, if it recruits and manages its own prison guards.
THE BAD

Human resource management is critical to the success of every organization, which functions include recruitment, training, good employee engagement, retirement or relieving/firing, however, most private security companies, do not handle these well enough and it in turn reflects in the attitudes and output of the companies.

The nature of private security requires state regulation, however, in some countries, either there are no regulations or where there are, they are not properly enforced, thus some companies operate without the requisite state or national license.

Training of security guards is very expensive and takes a chunk of many a security company’s budget, and as a result, some companies do not train their personnel or do not handle training well enough, to meet required standards.

There are several equipment that security companies require to operate effectively, which may include basic equipment like torchlight, batons, cameras, tasers, whistles, and to sophisticated ones, such as vehicles, screening and communication equipment, which are expensive and not all private security companies are able to acquire them, in order to help them operate effectively.

There is a high correlation between the quality of human resource and work output and the quality of security personnel has been disappointingly low, in some countries, which may be attributed to lack of training and education institutions or high cost of training.

Unfortunately, after these companies have employed these not-so-qualified staff, the security companies fail to train them, for there have been occasions where criminals have escaped prosecution, because security guards could not handle evidence well or there was no proper liaison, between law enforcement officers and private security company guards.

Bad scheduling and other guard force management lapses contribute to security guard fatigue which causes them to sleep whiles on guard duties. This attitude has led to loss of lives and properties in some countries.

Cooperation between private security companies and law enforcement agencies, have not been good, in some countries, and this can be attributed to the lack of confidence in each other, mistrust, lack of clear and properly defined roles and responsibilities.

Globally, the salaries for security guards are low, as some of the security companies are exploitative to the extent that, although they charge their clients huge fees, little is paid to the guards and other supporting staff, and this goes to affect morale and job performance of the security personnel.

Pre-employment and continuous screening, is critical because of today’s complex security landscape, unfortunately, there have been occasions where security guards have been culprits of active shooting, and it becomes difficult to, sometimes, attribute this to proper pre-employment screening and background checks, because that is the area where the security companies are supposed to demonstrate their expertise.

In some environments/countries, security guards connive with criminals, who come back to rob the same people the security guards are supposed to protect, whiles private contract security company guards, have also been accused of killing innocent civilians, in hostile environments.

The private security industry is growing because of increasing corporate espionage, declining rate of government expenditure on public protection, rising fear of crime and the awareness of the effectiveness of some private security companies.

Private security companies are here to stay hand their roles will continue to be relevant, to complement state institutions, in containing the increasing threat to lives and properties.

There is therefore, the need for a strong collaboration between state law enforcement agencies and the private security companies, in order to reap the maximum benefits to society.

SECURITY IMPLICATIONS IN THE USE OF VIGILANTE GROUPS: THE CASE...