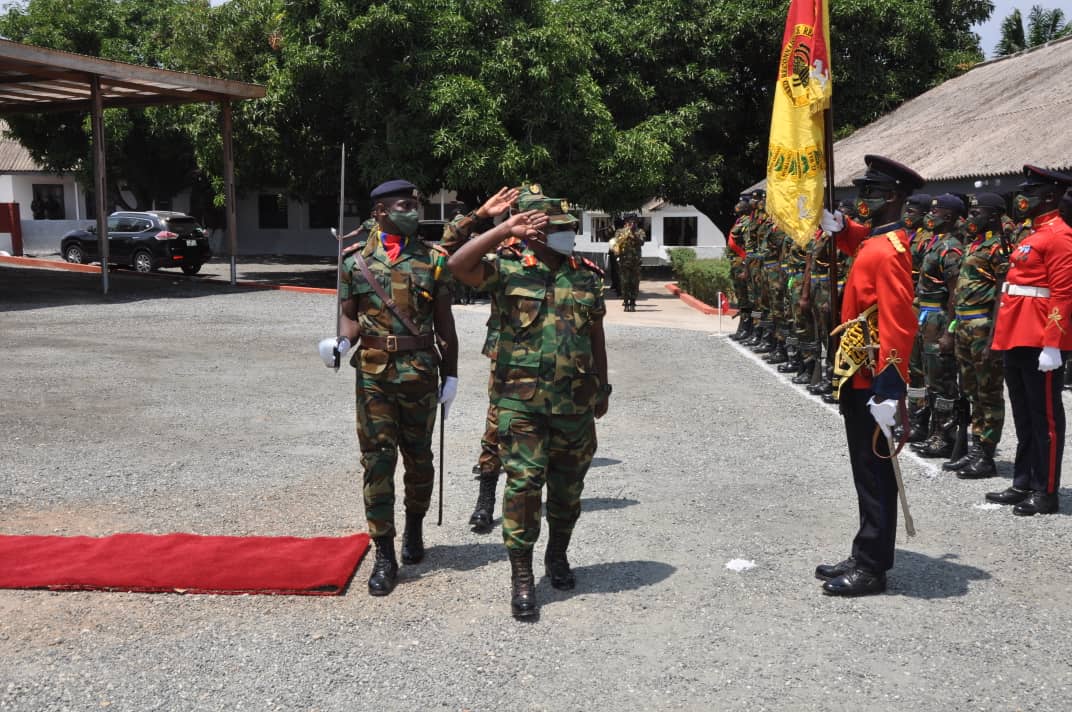 A group of concerned soldiers of the Ghana Armed Forces (GAF) have warned a civilian known as ‘Ranger’, to stop spewing falsehood and unsubstantiated attacks against the Chief of the Army Staff (COAS) – Major General (Maj Gen) Thomas Oppong-Peprah, or face their wrath.

The soldiers who vent their agitations anonymously to this writer, alleged that the man who claims to be a qualified Ranger from the reputable United States Army Ranger School and wears the school ranger badge, is a con man who goes about lying about everything.

The concerned soldiers expressed wonder as to how a civilian with no security certification and authority, was able to attend a United Nations Peacekeepers’ Medal Day Parade, as part of a military delegation, in times past.

The military men said this “Ranger” man became so powerful in military circles that, he even pulled a pistol on a Warrant Officer (WO), threw him on the ground, stepping on his neck, to “effect his arrest” on allegations that the WO was selling weapons.

“Ranger” is accused of being able to travel to Lebanon to ‘investigate’ Senior Officers and soldiers of the Ghana Armed Forces (GAF), serving with the United Nations Interim Force in Lebanon (UNIFIL), a job reserved for the Ghana Military Police.

“We are aware of how he got his money to buy a Toyota Landcruiser V8 for himself and a Porsche Cayenne for one of his girlfriends – a female WO at the Pay Corps Regiment” the soldiers alleged.

The soldiers, speaking about the COAS, lighted up with passion for the present Army Commander, for his great interpersonal skills, humanitarianism, fairness and the numerous developments he has brought into the Ghana Army, within the short period of six months of his appointment.

They cited massive improvements in accommodation issues, especially at the Bundase Training Camp, supply of uniforms to personnel and the repair of military vehicles, which were earmarked for auction, his ability to achieve numerous successes with judicious use of meagre resources, supervising the successful completion and implementation of the famous GAF Salary Review, amongst many.

“My brother, why are they always attacking him of having two wives? Is that against the rules or does it concern them? The reason we are so agitated is that, it has taken so long to have someone the caliber of the COAS, therefore, we are worried that if we miss him, all the needed things that he is attending to, would be put on hold, and that would draw the Army back, for already, we are far behind in a lot of developments” the soldiers opined.

The soldiers accused the civilian of infiltrating their ranks to abuse them, and therefore dared him, to produce certificates that show that he is a Ranger and a security expert, insisting that he has not even acquired a GCE “O” Level Certificate.

“We are aware of how he took advantage of his association with some Senior Officers and was granting favours to unsuspecting female officers and soldiers, in exchange for personal gratification. If he jokes, we will reveal everything we know about him”, the soldiers threatened.

Maj Gen Oppong-Peprah, who has been virtually pummeled consistently in a series of negative publications, from his days as the General Officer Commanding (GOC), Southern Command, then later as Chief of Staff, General Headquarters, but even his detractors have described him as a “highly professional soldier”, “who has seen every aspect of military life”, and “his biggest asset being his obsession to soldiers’ welfare”.