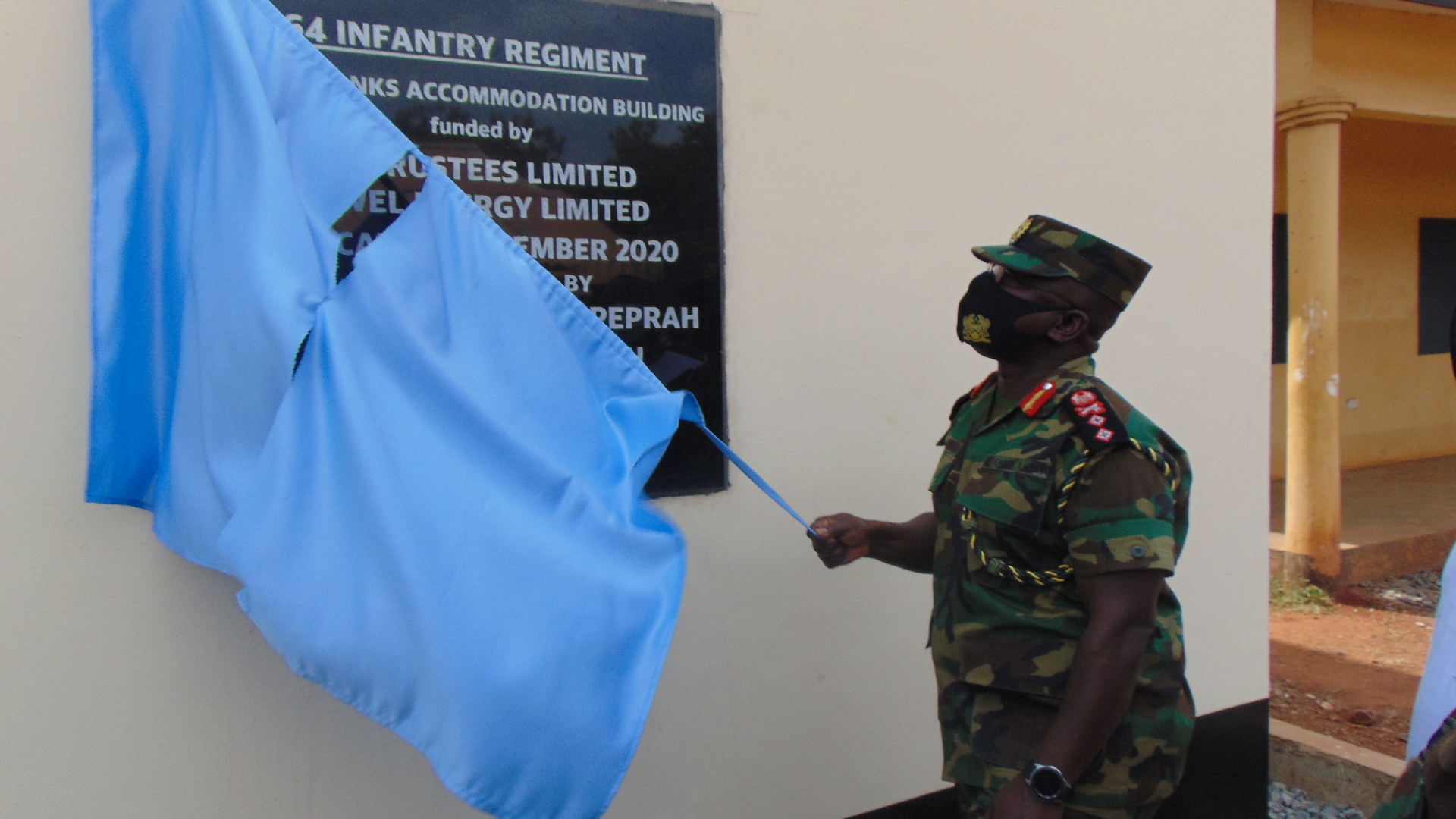 The housing facility, with a total cost of USD 350, 000, which was wholly funded by the Board of Directors (BOD) of Messrs JUWEL ENERGY and JP TRUSTEES, was out-doored on Tuesday, November 24, 2020, and entails ten apartments with each having a bedroom, washroom, kitchenette and a living area.

In his remarks as Guest of Honour at the commissioning event, Maj Gen Oppong-Peprah, who once was the Commander Rear and concurrently Commanding Officer (CO) of both 64 Infantry Regiment and the Armoured Reconnaissance Regiment (now 153 Armoured Regiment), said 64 Inf Reg is one unit that has encountered acute accommodation challenges, although it plays such strategic role for GAF.

The COAS stated that GAF is frantically pursuing accommodation solutions for its personnel, through hybrid schemes that the government, individuals, as well as private and state organizations, can help in providing solutions to the age-old acute accommodation challenges, faced by personnel of the Armed Forces.

General Oppong-Peprah also hinted that the Barracks Regeneration Project is about to start in Accra, after the Chinese left as a result of the COVID-19 upsurge, and that arrangements have been made for some of the buildings for 64 Infantry Regiment.

Maj Gen Oppong-Peprah stated that the wretched looking accommodations and tents at the Bundase Training Camp, are being pulled down, as the Army has teamed up with some individuals and organizations, to provide modern accommodation that is able to keep about 350 soldiers, as efforts are still being made to add up more facilities.

Thanking Mr John Osei-Wusu and his friends for their benevolence, assuring them that their names would be written in letters of gold, General Oppong-Peprah also acknowledged the tremendous support afforded GAF by her friends, individuals and organizations, and urged many other entities, to be motivated to do more for other units of the military, which are in dire need.

The Chief Executive Officer of Juwel Energy and JP Trustees – Mr Osei Owusu said the building is a product of his respect for the uniform, the Ghanaian military’s integrity, discipline, and sense of ownership.

Of the COAS, Mr John Osei-Wusu said that, it is necessary that great people are celebrated while they are alive, and not after they have departed the earth, for Maj Gen Oppong-Peprah’s exploits and commitment to the development of the country, he stated, has been huge, citing his involvement with the Ghana COVID-19 Treatment Centre at the Ga East Government Hospital.