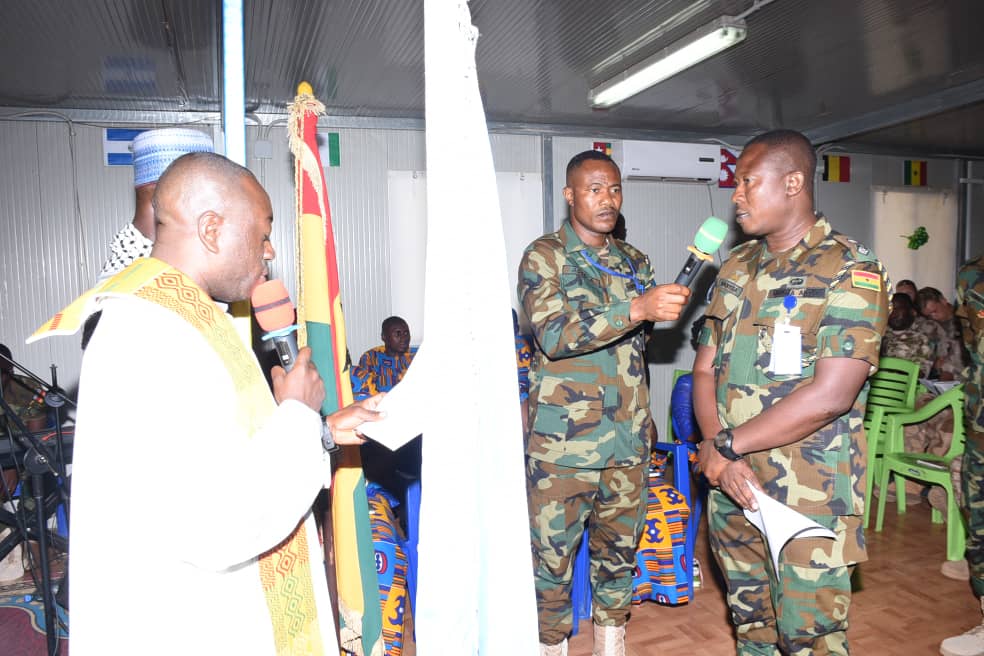 The Officer Commanding (OC) the Ghana Engineer Company 8 (GHANENCOY 8) serving in Mali – Lieutenant Colonel (Lt Col) Atsu Agbenyega , has been inducted into office during an induction religious church parade held at the Sappers Chapel in the Sappers Camp.

The induction church parade on Sunday 16 February 2020, was to formally usher him and his troops into the mission area after taking over from GHANENCOY 7 and also to seek God’s guidance and protection during their tour of duty.

The Company Imam, Lt Shuaib Mohammed Ameen, in his exhortation under the theme “Chosen for the Mission of the Father”, counseled the troops to have trust in the almighty Allah whom would never forsake them in their challenges.

He added that everyone in the mission area was chosen for a purpose and to achieve that purpose, troops should have patience and perseverance to be able to have a successful tour. He reminded them that they should always be cautious in their actions and inactions since they would answer for those actions on judgment day.

The Chaplain, Flying Officer Quansah Jacob Ernest Kyei (RVFR) also reiterated the need to have patience and perseverance to achieve the purpose that they were called for.  He urged troops to support each other and be united to have a successful tour.

In his remarks, Lt Col A Agbenyega entreated all the troops to remain vigilant, resilient and focus on the task ahead in other to have a successful tour of duty. He thanked God for a successful handing and taking over parade. He also used the opportunity to thank the invited guests for gracing the occasion.