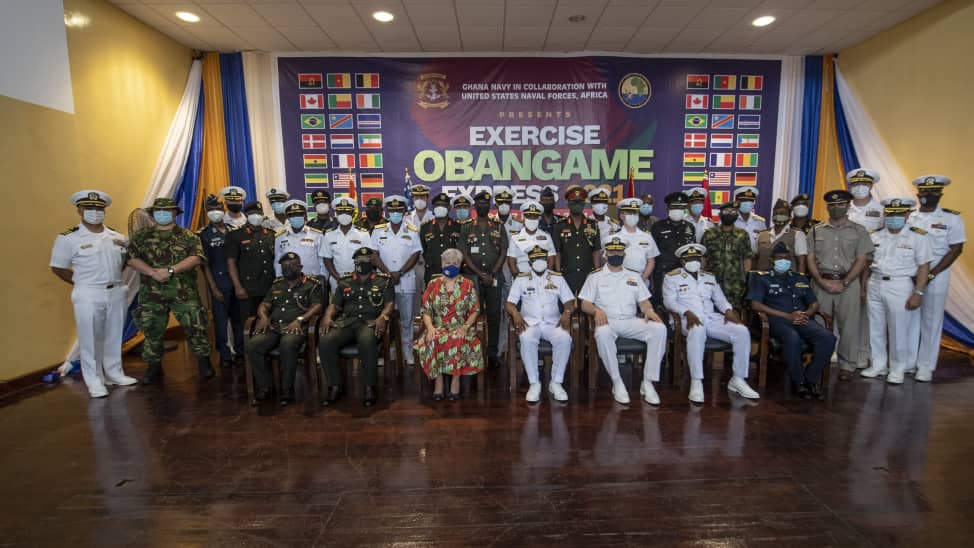 OE21, which started on March 14th, ended in Accra on Saturday, 27th March, 2021, with 200 participants from 36 countries and international organizations, combining in-person and virtual conferencing and other practical scenarios, to train for their objectives.

The Guest of Honour for the opening and closing ceremonies – the Chief of the Defence Staff (CDS) of the Ghana Armed Forces (GAF) – Vice Admiral (V/Adm) Seth Amoama said that Gulf of Guinea nations, together with their international partners, are still poised and willing to come together to fight the menace of maritime crime and incidents.
Admiral Amoama stated that the determination of the nations concerned, stems from the fact that, in recent times, there has been an increase in the number of vessels operating within the Gulf of Guinea region, bringing with it a commensurate increase in maritime incidents.
“For those of us in the sub region therefore, our concern is not only about preventing the threats in the Gulf of Guinea but also, empowering law enforcement agencies by equipping them with the requisite capacity and capabilities to effectively deal with the threats”, the CDS said.
In his overview address of the training period, the Chief of the Naval Staff (CNS) of the Ghana Navy – Rear Admiral (R/Adm) Issah Adam Yakubu, stated that there was a pre-exercise maritime domain awareness training, to ensure various doctrines and standard operating procedures were synchronized, for the smooth conduct of the exercise.
Admiral Yakubu further intimated that the exercise covered scenarios on piracy, arms smuggling, illegal unreported and unregulated (IUU) fishing, illegal bunkering, oil spills, search and rescue operations, human trafficking and narcotics.
The CNS added that because the nature of the scenarios involved regulatory and law enforcement agencies, the Environmental Protection Agency (EPA), National Investigations Bureau (NIB), Fisheries Commission, Customs Division of the Ghana Revenue Authority (GRA) and the Maritime Police, worked with their naval and air force counterparts, to a holistic and harmonized conduct of various tasks.
V/Adm Yakubu said that in spite of a few challenges encountered, such as limitations in surveillance capability, owing to logistical constraints, and non-participation of expected particular vessels and aircrafts, there was marked improvement in communication amongst participating navies, air forces and other agencies, as a result of lessons learnt from previous exercises.
R/Adm Jeffrey S Spivey – Director, Partnership Programme, US Naval Forces, Europe And Africa, in a presentation, said that EX Obangame has grown from humble beginnings, to the advancement made by Gulf of Guinea navies and coast guards, in the areas of regional cooperation, maritime domain awareness, information-sharing practices, and tactical interdiction expertise.
Admiral Spivey opined that maritime trade is key to the global economy, and that anyone who doubts that should look at the immediate impact of the current Suez Canal closure; which is no different in Atlantic Africa where maritime trade, enabled by maritime security, is critical not only to regional prosperity, but also global prosperity.
“Only when maritime trade freely sails through the Gulf of Guinea, are economic development and opportunities for prosperity possible” Admiral Spivey stated.
Admiral Spivey additionally stated that, at the strategic level, the Senior Leadership of the conference, agreed that the Yaoundé Architecture for Maritime Security, along with information fusion mechanisms, are the key to successful interdiction of vessels in violation of maritime law in the Gulf of Guinea.
The 11-year-old EX OBANGAME EXPRESS, started predominantly with communication exercises, testing the flow of information between national and regional Maritime Operations Centres, and has since expanded to include robust at-sea scenarios, where boarding teams, ship crews, maritime special operations forces, medical teams, and even aircrafts, are exercised.
In a related development, within the exercise period on Sunday, the 21st of March 2021, in the Gulf of Guinea, the French Navy performed a record seizure of more than 6 tons of cocaine, from the vessel NAJLAN (a 105-meter-long cargo, which left South-America and was under close surveillance), during an operation led by the maritime prefect of the Atlantic and Brest prosecutor’s office.
According to a French Navy press release, the large-scale operation was based on intelligence forwarded by the French anti-drug agency (OFAST) and the Dutch police, in close collaboration with the Maritime Analysis and Operations Centre – Narcotics (MAOC-N), based in Lisbon, the European Police Office (EUROPOL) and Brazilian authorities.
The nations and regional organizations who participated in OE21 included Angola, Belgium, Benin, Brazil, Cabo Verde, Cameroon, Cote d’Ivoire, Democratic Republic of Congo, Denmark, Equatorial Guinea, France, Gabon, Gambia, Germany, Ghana, Guinea, Guinea-Bissau, Italy, Liberia, Morocco, Namibia, The Netherlands, Nigeria, Poland, Portugal, Republic of Congo, Sao Tome & Principe, Senegal, Sierra Leone, Spain, Togo, the United States, Economic Community of West African States (ECOWAS) and the Economic Community of Central African States (ECCAS).
Dignitaries present at the closing ceremony included the Ambassador of the United States to Ghana – Her Excellency Stephanie Sullivan, the Chief of the Army Staff of GAF – Major General Thomas Oppong-Peprah, the Chief of the Air Staff – Air Vice Marshal Frank Hanson and the Chief of Staff at the General Headquarters – Major General Peter Nicholas Andoh.