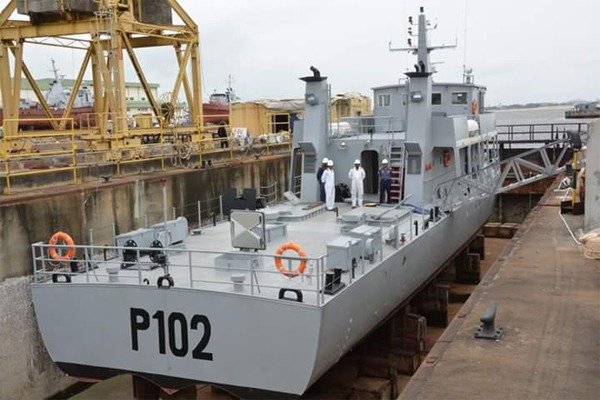 The Nigerian Navy (NN) has indigenously constructed and deployed three warships – Seaward Defence Boats – (SDB) 1, 2 and 3, for patrols within the country’s maritime domain, and to act as a force multiplier, in her bid to continually maintain presence at sea.

The vessels were constructed at the Naval Shipyard in Port Harcourt and the Naval Dockyard Limited (NDL) in Lagos, which have been revived by the country’s government, as part of plans for the development of indigenous capacity, in shipbuilding and maintenance.

The laying of the keel of the 43-meter length third vessel – SDB III – by Nigeria’s Commander-In-Chief (C-In-C) of her Armed Forces – His Excellency (HE) President Muhammadu Buhari himself, was enough Presidential approval of the efforts of the Chief of the Naval Staff (CNS) of the NN – Vice Admiral Ibok-Ete Ibas, to promote local content in naval vessels construction.

The latest of the chain, delivered in January 2020 was the SDB 3; 43-meter long, able to be fitted with advanced navigation, communication, and war-fighting equipment, 30mm remotely operated gun, two 12.4mm multi-purpose heavy machine guns, a 40mm grenade launcher and an RHIB.

The SDBs are said to be easy to maintain and are fit-for-purpose in tackling maritime challenges in the Gulf of Guinea (GOG) region.

It may be recalled that during Ghana Navy’s 60th Anniversary Celebrations, the NNS KARADUWA, alongside a fast patrol boat NNS EKULU, were at the Sekondi and Tema Ports in Ghana, on July 22nd – 24th, to pay a solidarity visit, putatively flaunting the West African giant’s might of newly acquired Naval warship building capability, at the International Maritime Defence Exhibition and Conference (IMDEC) held in Accra, Ghana.

Nigeria’s Naval Shipyard Limited has built barges, tugboats and ferries for NN and other users in the maritime industry, whiles the Naval Dockyard Limited (NDL), has constructed SDBs, Glass Reinforced Plastic boats and a house boat for the NN.

Additionally, the Dockyard, in partnership with a private Engineering Services company, has constructed 2 X 500 Tons self-propelled barges for NN – one of the barges is being built to supply Automotive Gas Oil to naval vessels at sea, while the second barge supplies fresh water.

Nigeria recently donated a number of Made in Nigeria Patrol boats to neighbour Chad.

Shipbuilding, if well-coordinated, would impact on other areas of technological advancement and promote national development as a whole, as skilled manpower is required for such precision jobs, which would also spiral job creation opportunities, thus fulfilling the Constitutional mandate of the Armed Forces – Defence and Development (1992 Republic of Ghana Constitution, Chapter 17, Article 210, Clause 3).