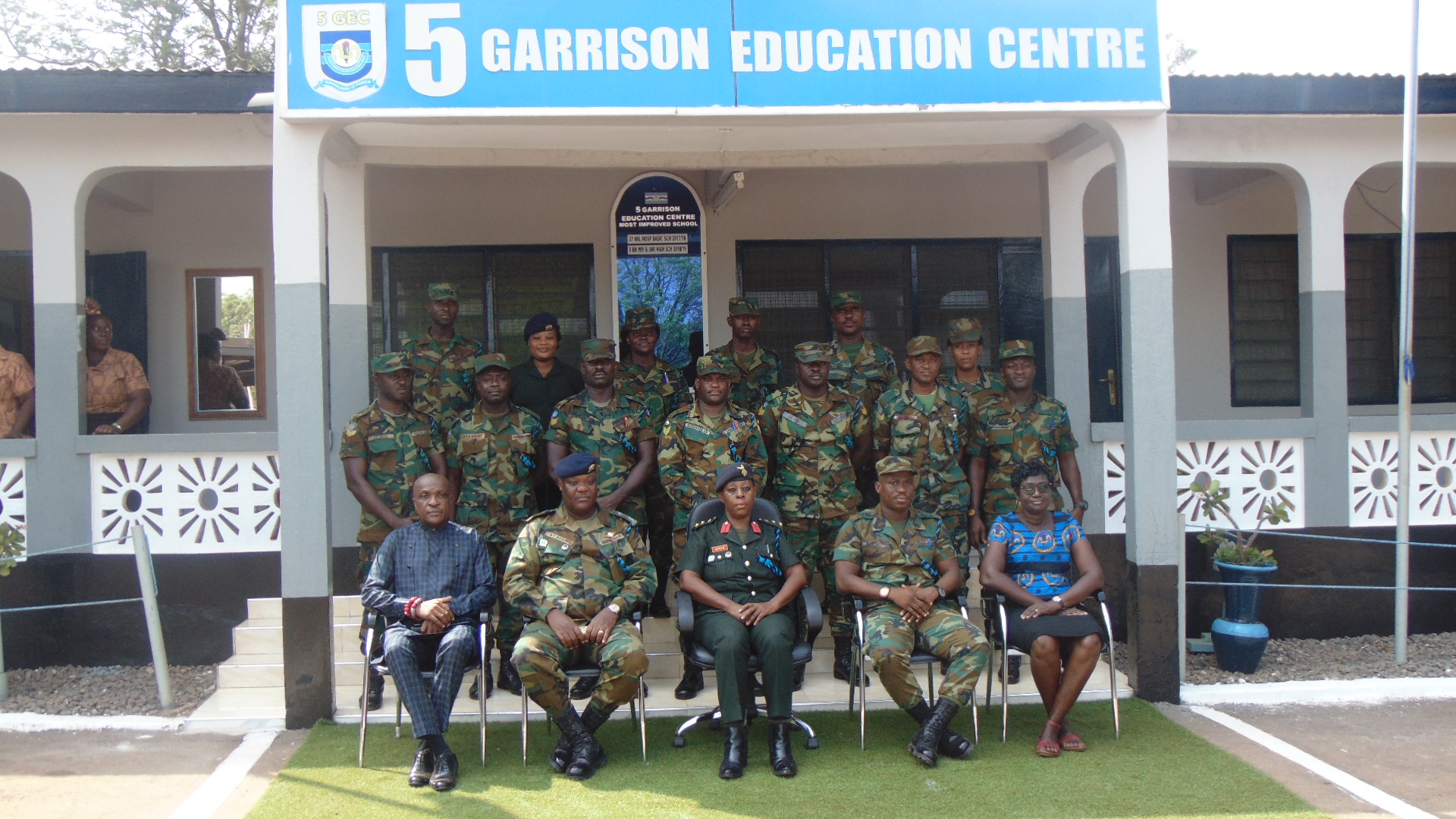 The Director of Education, Ghana Armed Forces (GAF) – Colonel (Col) Anita Asmah, has assumed office with a tour of all Garrisons of the nation, interacting with various schools’ management, to know at firsthand, what needs fixing and other initiatives, policies and practices, that have to be encouraged.

The tours were segmented, with some of the Forces Senior High Schools benefitting from the tour in 2019, whiles most of the Basic Schools were visited in early 2020, and a debrief session with the heads of schools and staff under 5 Garrison, held on Friday, 7th February, 2020.

The tour of  the 5 Garrison – which has twenty-four (24) schools, with a learner population of 14,712 – took the Director and her entourage to 37, Flagstaff House and Base Ordnance Depot (BOD), Arakan Cluster, Chiringa Cluster and the Adjettey Circuit (including the Services School and the triplet of schools) Basic Schools and Kindergartens, from Monday, 3rd to Friday, 7th February, 2020.

For the public schools in 5 Garrison, which operates in 4 Circuits; that is Ledzokuku (Teshie schools), Arakan, Adjettey and Kanda circuits (the 37, Flagstaff Schools), the Burma Camp Schools and BOD, fall under La Dadekotopon circuit, they are almost at the top of all public schools in their zone.

Despite the common trend identified during the visits – being the challenge of infrastructure – the grades of graduating learners, have been acknowledged as are very good; for example, with the release of the latest results of the national Basic Education Certificate Examination (BECE), 5 Garrison (Accra) was 3rd in the Metropolis, in competition with all schools, public or private.

It should however be noted that, during national examinations, some of the high-grade schools tender lower numbers of students than the Armed Forces schools do, as compared to the latter’s large numbers, thus at the results, the former obviously comes out with higher percentages of success.

Following the introduction of the Capitation Grant in 2005, the policy indicated that no school was to take levies, due to the release of the grant for minor repairs, by the Ministry, however, there was a case made for the Armed Forces schools, since the local municipal assemblies, wherein the schools are located, do not directly support them.

The GAF budget also, being quite constrained in catering for education, thus an arrangement was made that the Forces schools could charge some amount of levies.

Ghana Education Service does not provide free books for Armed Forces schools, however, the GAF Education Unit manages to get books sanctioned by GES and makes them available for the schools, for parents to decide on buying them or not, even though it is not compulsory to purchase the books.

Interestingly, at the various schools, the Parent-Teacher Associations (PTA) could decide on an amount but approval is only granted for implementation by the Education Center, with the status quo being a maximum PTA levy per term per child of GHS 30.

For the basic school children, whose parents and guardians are Armed Forces Service, Ministry of Defence, Civilian Employees and Teaching personnel, they pay fees of GHS 71 per term for Primary and Junior High School (JHS) and GHS 69 for Kindergarten, while civilians from outside the Armed Forces structure pay GHS 73 and GHS 75, respectively, for Kindergarten and basic education.