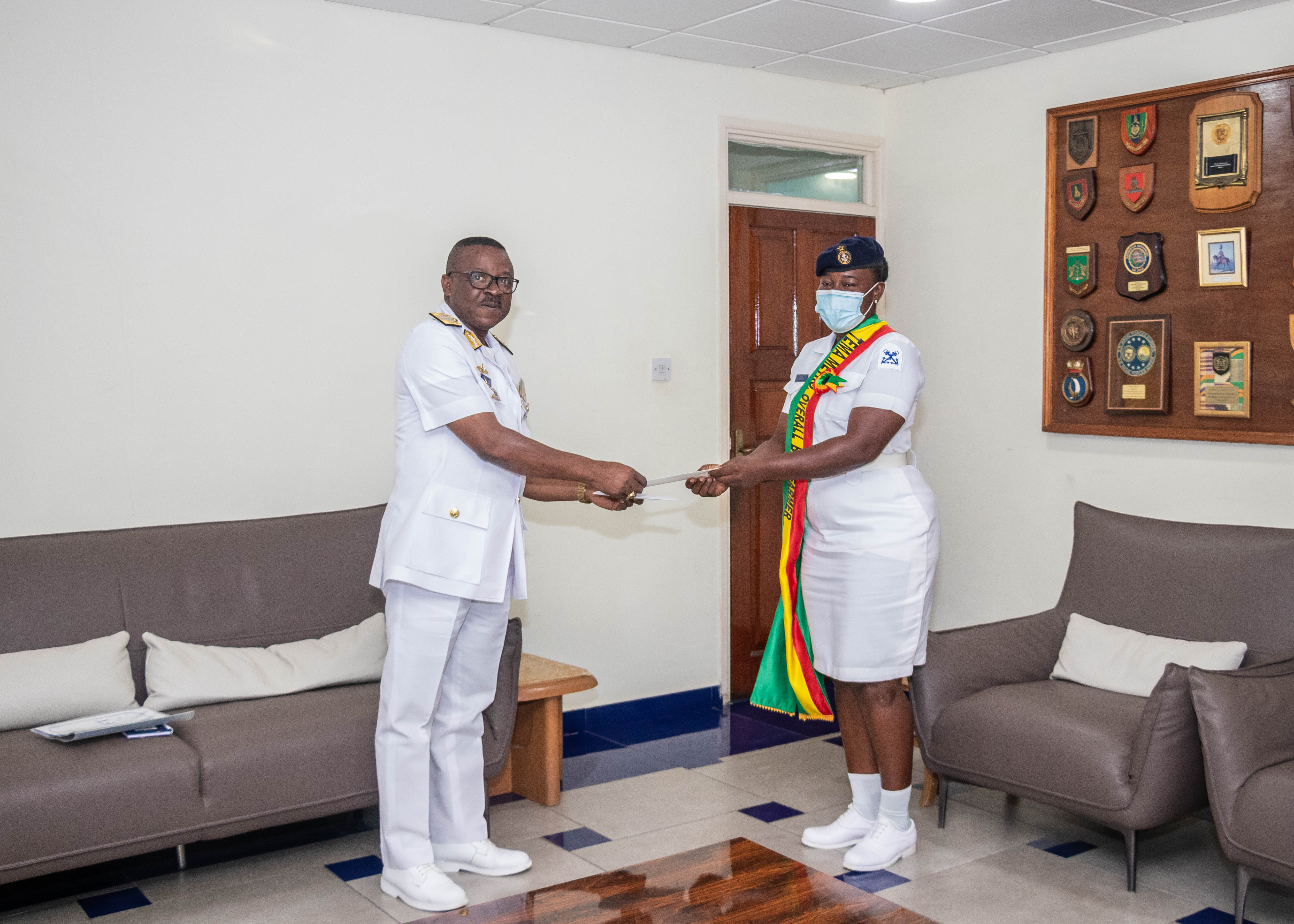 The Chief of the Naval Staff (CNS) – Rear Admiral (R/Adm) Seth Amoama has highly commended Petty Officer Class II (PO II) Sapak Philomena of the Ghana Navy Band, who was adjudged Tema Metropolitan Area Overall Best Farmer in Animal and Crop Farming, expressing the hope that she becomes an example to both serving and retired personnel.

After being presented with the dummy winner’s cheque, the CNS presented PO II Sapak with a Commendation Letter and an amount of Two Thousand Cedis (¢2000), at his office at the Navy Headquarters, on Thursday, 12th November, 2020.

PO II Sapak, who as a child, started backyard farming, has been engaged in largescale farming for about five years, and has her animal farming at Bankuma, Tema East and Adjei-Kojo, Tema West and some of her crop farming, also at Adjei Kojo.

PO Sapak, who said she enjoys farming because it is fun and also lucrative, had a scholarship, due to her sporting abilities, to attend the Tema Secondary School, however, she chose the Ashaiman Secondary School instead, as they offered Agriculture, so she could acquire more knowledge in her line of interest.

The military lady engages in shifting cultivation, depending on the season, to produce potato, plantain, pepper, okra, lettuce, cabbage, carrots and has over 63 pigs, 22 goats and some fowls, which she regularly shares with those who have been supplying her with fruits.

PO Sapak came to the limelight when she regularly bought large quantities of wheat bran, from a lady at Bankuma, who visited the former’s farm and later spoke to her son, who is an executive of the farmers’ association, who also arranged for Agriculture Extension Officers and for the District Veterinarian, whom she obeyed copiously.

The agricultural officers submitted her details to the authorities, as they considered her to be over qualified to be awarded at the state-organized awards, thus some officers later followed up to scrutinize her record books and actual activities, after which she was called, on the eve of Farmers’ Day and persuaded her to attend for her to be honoured.

“A call-up by the CNS for recognition is something that every Rating in the Ghana Navy dreams of, so to be commended by the CNS, is overwhelming for me and a dream come true, and would motivate me to do more”, PO Sapak said.

Futuristically, the military lady is working on aquaculture and snails, and at acquiring a large tract of land, to be able to produce corn in large quantities to prepare feed for the animals, to cut down the cost of feed preparation, which is very expensive and weighs heavily on the farmer’s financials.

“To my fellow colleagues in uniform, agriculture is difficult, time consuming and financially engaging, but it produces satisfying results, and so, even at your backyard, you can grow something, to at least avoid these genetically modified foods”, she concluded.