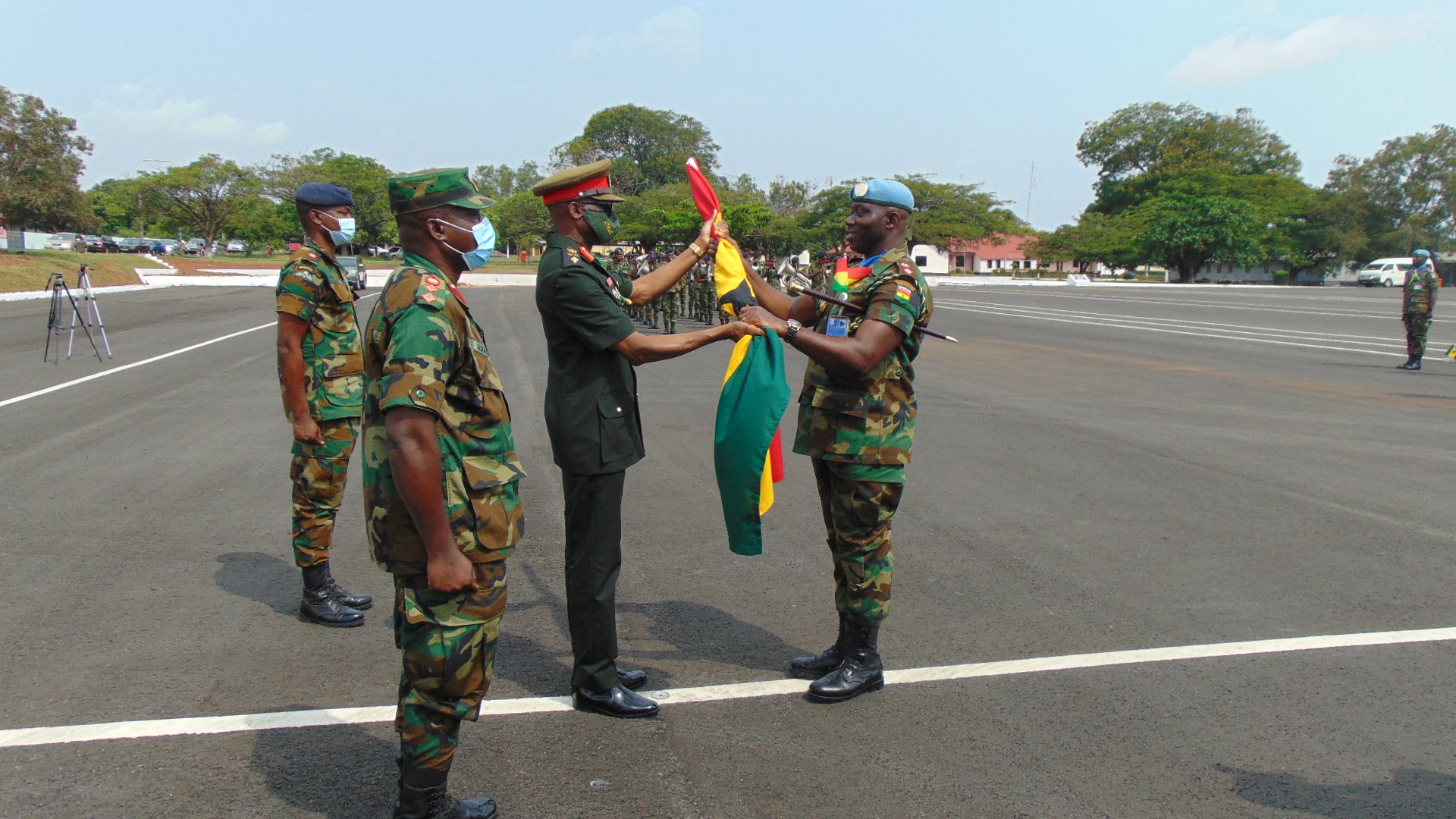 After over 60 years of peacekeeping in Congo, a Mission Accomplishment and Return of Flag parade has been held by one hundred and eighty troops (180) of the Ghana Armed Forces (GAF) – Ghana Battalion 15 (GHANBATT 15) – of the United Nations Stabilization Mission in The Democratic Republic of Congo (MONUSCO), being the longest serving and last mission for that peacekeeping theater.

MONUSCO GHANBATT 15 is the longest serving Ghanaian United Nations peacekeepers, after serving from 21st of March, 2019 to 5th March, 2020, where they endeared themselves greatly at that theater, at the perils of the Ebola and COVID-19 diseases, but achieved a clean record from infection.

A citation in honour of MONUSCO GHANBATT 15, read on the behalf of the Chief of the Army Staff (COAS) – Major General Thomas Oppong-Peprah, by Colonel Amanor, unfolded this wise;

“In fulfillment of Ghana’s commitment to international peace and security, the Ghana Armed Forces has since 2001 actively participated in peace support operations in the Democratic Republic of Congo (DRC), initially under the auspices of united nations organisation mission in the DRC (MONUC) and later in July 2010, under MONUSCO.

This noble task was to support the electoral process in coordination with the United Nations Joint Human Rights Office (UNJHRO), Civil Affairs and United Nations Police (UNPOL), you dominated the territory with day and night patrols, to assure the people, provided transport, accommodation and escorts for the united nations agencies.

After being redesignated Force Reserve under the operational control of the Force Commander within the framework of the Force Drawdown, Reconfiguration and Redeployment plans: GHANBATT 15 professionally met all operational commitments, which included providing Static Guard duties for MONUSCO installations at Fabrication Nationale des Meoble en Aluminum (FNMA), MONUSCO HQ, Utex Africa and the MONUSCO terminal at the N’djili Airport and later, the Kananga Airport, Kananga MONUSCO field office and the Tsikapa sub-field office after redeployment to Kasai.

The invaluable role of your female engagement team (FET) did not only enhance MONUSCO’s gender mainstreaming agenda in the DRC, but also inspired hope and confidence in women and children in your AOR.

Notwithstanding the numerous operational commitments of the unit, you also engaged in extensive Civil-Military Cooperation activities in your AOR such as a grand party organized on 5 June 2019 for orphans at buna orphanage as part of the Eid-ul-fitr celebration, regular supply of drinking water to your host communities, provision of medical assistance, dental and outreach programmes went a long way to improve the lives of indigenes in your AOR”, the honour message ends.

Speaking as the Review Officer (RO) at the welcome parade, the Commander, Army Training Command (ATRAC) – Brigadier General (Brig Gen) Winfred Dzandu-Hedidor, recalled the history of Ghana’s involvement in the quest for peace in congo, historically Zaire, which dates as far back as 1960.

General Dzandu-Hedidor recalled with sorrow, the “Port Franqui Tragedy” incident, how 43 Ghanaian peacekeepers, were killed by troops of the Congolese army, in the Kasai province, as some died attempting to swim across the River Congo).

Lieutenant Colonel (Lt Col) Sebastain Abraham Arhin – Commanding Officer (CO) of GHANBATT 15 and of 4Bn, expressing pride in the Officers and soldiers he worked with, urged them to allow that same professionalism and dedication that they exhibited at the mission area, to permeate their duties, when they resume duties in Ghana, for national stability to be sustained.

Lt Col Arhin intimated that the usual UN mission lasts for 6 months, however, the UN requested an extension of GHANBATT 15’s time to 12 months, after which the Jordanian team was to takeover, subsequently, due to the COVID-19 situation, GHANBATT 15 was further urged to remain in position, making the total mission time to about 20-months.

The total troops size of GHANBATT 15 was Four Hundred and Sixty-Two (462), with an advance party earlier returning home on the 5th and 6th of July, 2020, leaving One Hundred and Eighty (180), who returned to end the MONUSCO Tour of Duty.

Present at the ceremony was the Director-General, International Peace Support Operations (IPSO) – Brig Gen Kwesi Mends, former COs of other MONUSCO GHANBATTs and the Gender Policy Advisor to the Chief of the Defence Staff – Commander Veronica Adzo Arhin.