The BRAVO Guard Company of the Ghana Battalion (GHANBATT) 15, serving with the United Nations Organisation Stabilisation Mission in the Democratic Republic of Congo (MONUSCO), organised a massive clean-up exercise within the surroundings of the N’Djili Airport, Kinshasa, specifically the vicinity of the old MONUSCO terminal.

The exercise, which forms part of the battalion’s Civil-Military Cooperation (CIMIC) activities in their area of operation, was held on Saturday, 25 May 2019.

The troops collected over 1,200 litres of solid waste as they got involved in weeding, sweeping and picking plastics among others.

One of the Airport Aviation Security Coordinators, Mr. Ngwabana Mafolo Jean-Claude, also joined personnel of GHANBATT in the clean up exercise.

The DCO in his remarks after the exercise, applauded the troops for contributing to the success of the exercise and hinted of plans to get the exercise replicated by the other Companies within the battalion. This, according to him, was to foster close working relationship with security agencies and create a positive image of GHANBATT in the hearts and minds of the people of the Democratic Republic of Congo.

Maj Agboado noted that the exercise would go a long to serve as a sensitization drive to deepen the people’s understanding of the need to cultivate positive attitudes towards waste disposal and management.

He added that clean environment plays a key role in the health of people, therefore, a change in  attitude towards littering and indiscriminate rubbish disposal would have a great impact on the environment and the health of the people. 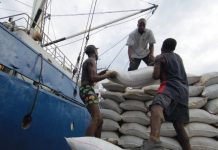