Almost every staff, office and Department in Bamako, Mali, is awashed with the news of the successes and achievements of the selfless Engineering works of the Ghana Army Engineer Company (GHANENGCOY 7) of the Ghana Armed Forces (GAF), serving with the United Nations Multi-Dimensional Integrated Stabilization Mission in Mali (MINUSMA).

Ghana Ambassador to Mali, Major General (Maj Gen) Francis Adu-Amanfoh (rtd) said this to the GHANENGCOY7 troops during his four day working visit to the Sappers Camp in the UN Super Camp, Tomboucktou – the troubled region in the north where the conflict is still slippery sleepy – from Tuesday 5th to 8th February 2019.

The Ambassador was also the Reviewing Officer of the handing/taking over parade which saw GHANENGCOY 6 successfully change over baton to GHANENGCOY 7, which takes effect from the 8th of February, 2019.

He therefore urged the new Company taking over from GHANENGCOY 6, to continue the good work for the governments of Mali and Ghana, are indeed proud of the achievements so far, he admonished.

The visit was also aimed at welcoming the new Commanding Officer (CO) GHANENGCOY 7, Lieutenant-Colonel (Lt Col) Winston Luck Kweku Djiyehue, to the mission and as well to congratulate the outgoing CO, Lt Col Michael Kwame Mfum, for his dedication and successful tour of duty in support of the mission mandate throughout their period of stay in Mali.

Some of the feats achieved by GHANENGCOY 6 follows; the Company revised and strengthened the Force protection within the Super Camp, rehabilitated the main supply route known as ‘Octopus’ at Kariome ferry crossing site, completed the Chain-link fencing at the Super Camp and installed ‘Oxfam’ water tanks and amongst others assembled and completed prefab units before schedules.

As part of his visit, the ambassador received a detailed brief of the current security situation of the operational area of responsibility (AOR), as he was taken around some facilities and ongoing projects that the Company is undertaking, as he also visited some other units within the camp.

Gen Adu-Amanfo (rtd) noted the importance government attaches to the mission urging commanders to upgrade their intelligence systems in order not to leave any stone unturned in their operations.

The GAF retired general promised to add his voice to the challenges posed as a result of the absence of a defense platoon, which he said would provide its own force standing security for the artisans when working at their site.

The GHANENGCOY is the only unit in the mission mandated by the United Nations with the responsibility of major engineering works in Sector West and is also in charge of construction works within the camp.

The crisis stems from long-standing structural conditions such as weak State institutions; ineffective governance; fragile social cohesion; deep-seated feelings among communities in the north of being neglected, marginalized and unfairly treated by the central Government; a weak and externally dependent, albeit vibrant, civil society; and the effects of environmental degradation, climate change and economic shocks.

In mid-January 2012, a Tuareg movement known as the Mouvement national pour la libération de l’Azawad (MNLA), along with Islamic armed groups including Ansar Dine, Al-Qaida in the Islamic Maghreb (AQIM) and the Mouvement pour l’unicité et le jihad en Afrique de l’Ouest (MUJAO), in addition to deserters from the Malian armed forces, initiated a series of attacks against Government forces in the north of the country.

The Tuareg rebellion was emboldened by the presence of well-equipped combatants returning from Libya in the wake of the fall of the regime there and following the coup d’état, UN Secretary-General’s Special Representative for West Africa, Said Djinnit, offered the support of the United Nations to the Malian authorities.

As a result, the Mali interim authorities requested United Nations assistance to build the capacity of the Malian transitional authorities in the areas of political negotiation, elections, governance, security sector reform and humanitarian assistance.

The UN Assistant Secretary-General for Peacekeeping Operations, Edmond Mulet, visited Mali from 10 to 16 March, together with a multidisciplinary delegation, to develop recommendations for the Council’s consideration on options for establishing a United Nations peacekeeping operation in Mali.

On the basis of this mission’s findings, the UN Secretary-General presented to the Security Council a report, outlining options for the establishment of the UN peacekeeping operation in Mali. 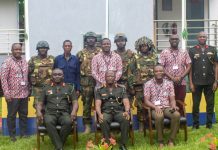