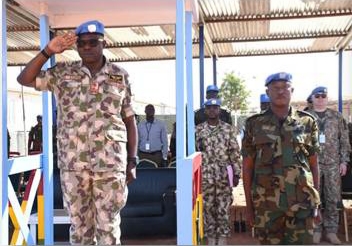 The Company organised a Flag Hoisting ceremony, on Friday, 6th March 2020, with a parade under the command of Lieutenant (Lt) EK Akorful, in Mali, with the highlight of the parade being the hoisting of the Ghana flag and the singing of the national anthem.

In his address, the MINUSMA Sector West Commander – Brigadier General (Brig Gen) Eno Eno Eyong, who was the Guest of honour, commended the Ghana Company for the wonderful display of military drill skills and added that the United Nation Mission in Mali, was so far satisfied with the performance of the Company.

He entreated the troops to do away with complacency and maintain professionalism and loyalty, which is the motto of the Ghana Armed Forces (GAF) in all endeavours.

The Officer Commanding (OC), GHANENCOY 8 – Lieutenant Colonel (Lt Col) Atsu Agbenyega, in his remarks, commended his troops for their good conduct and discipline so far and urged them to continue to be good ambassadors of Ghana.

As part of the celebration, the Company also played a volley ball match with the El-Salvador Firefighting Unit and organized an all ranks dance, where troops and guests were treated to good old Ghanaian music and the traditional Borborbor dance.

The 63rd Independence Anniversary celebration was climaxed with a Thanksgiving Religious Service, where prayers were said for the country Ghana and its leadership, the GAF and GHANENCOY 8.