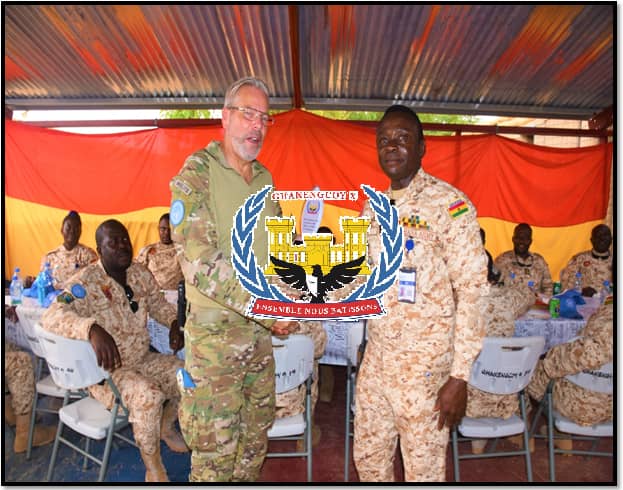 The GHANENGCOY visit, which was on Monday 4 July, 2022, at the Sappers’ Camp, Timbuktu, had the Sector West Commander, MINUSMA – Brigadier General (Brig Gen) Joel Bewanlo, in the entourage of the FC, and were received by the Officer Commanding (OC) GHANENGCOY 10 – Lieutenant Colonel (Lt Col) Edward Kofi Poku.

After being given a detailed brief covering the scope of engineer operations of the GHANENGCOY, the FC discussed challenges of the Unit, as a result of the stalled rotation faced by West African countries in MINUSMA, as well as logistical challenges.

General Matthijssen further indicated his hope that the recent lifting of sanctions by the Economic Community of West African States (ECOWAS) from Mali, following its last meeting in Accra over the weekend, would allow for the successful completion of the rotation.

The FC further expressed his appreciation to GHANENGCOY 10 for a good job done so far, despite the numerous challenges, and commended the OC and his team for ongoing engineer works in the Sector, after which he spent time over lunch to interact with Officers of the Unit.

In the FC’s delegation was the MINUSMA Forces Sergent Major and other dignitaries from the Mission Headquarters.