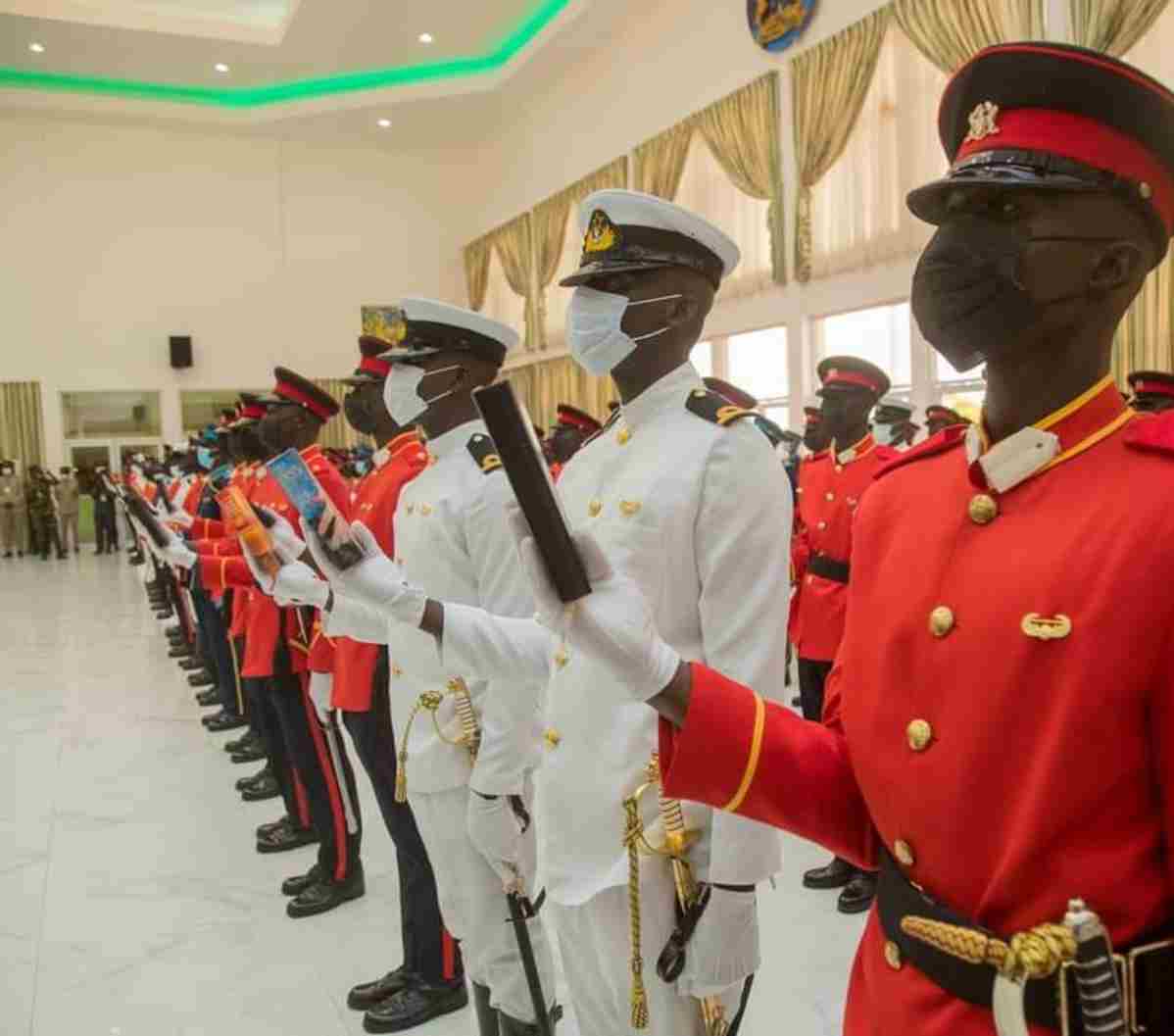 One Hundred and Sixty-Three (163) Young Officers of Regular Career Course Intake 61, have been granted the Presidential Commission to the Ghana Armed Forces (GAF) to mark the commencement of another phase of their new career, after they had undergone one-and-half years of training to become military personnel.

Their commissioning took place at the largest military square in Ghana, the Ghana Military Academy (GMA) Square on Friday, August 12, 2022, with the Commander-In-Chief of the GAF and President of the Republic of Ghana being the Reviewing Officer (RO).

Among dignitaries present at the colourful graduation parade were Ghana’s Ministers for Defence, Interior, National Security, Greater Accra Region, Chief of the Defence Staff of GAF, the three Service Chiefs of GAF, Chief of Staff at GAF’s General Headquarters, GMA Commander, Formation Commanders, amongst many.

We reproduce excerpts of the address by the C-In-C during the graduation parade below:

“Government is delivering on its promise to upgrade the Ghana Military Academy to bring it apar with other reputable military academies across the world.

As at today, the Phase 1 of the construction works of the Academy is almost completed. The renovated Officer Cadets Mess, and the Academy Parade Square, were completed and commissioned, on 13 November 2020, and since been fully operational.

The 320-seater capacity 2-storey classroom block, and the magnificent Administration Block, have been completed.

The 3-storey 246 Cadets Hostel, the 2-bedroom 16-apartments Officers accommodation for Platoon Commanders, the 2-bedroom 4-apartments half-compound for Senior Non-Commissioned Officers and the boundary fence wall, are virtually complete with the installation of fittings, paintings, external works, landscaping and the connection for water and electricity expected to be completed by the end of August, 2022.

The construction of the 850-seater capacity auditorium whose structural frame construction is progressing fast, would be completed by the end of the first quarter of 2023 to conclude the first phase of the GMA Reconstruction and Upgrading Project.

In view of the contemporary emerging and future threats in our region, addressing security issues cannot be business as usual. Government has thus approved the expansion of the Ghana Armed Forces, to cater for these threats.

The strategic expansion and modernization of the Armed Forces, in line with the threat analysis and the acquisition of the requisite equipment, logistics, infrastructural development and increase in manpower, are being pursued vigorously.

In terms of manpower expansion, GAF has recruited and trained some three thousand soldiers (3000) between 2017 and 2020. It has since 2021 embarked on accelerated nationwide recruitment and training to churn out a minimum of 4,000 Officers and Soldiers annually till 2024, in order to beef up the strengths of our Armed Forces to optimum levels.

Thus, a minimum of 2,000 recruits were trained in recruit training schools of the Three Services every six months, while the strength of Officer Cadets in recent times, has bee increased exponentially since 2020.

Government, aware of the Armed Forces housing deficit, which is bound to increase following the accelerated enlistment and recruitment, has intensified and expanded the provision of accommodation across all Garrisons of the Armed Forces, in addition to the construction of 832 accommodation units for the armed forces installed under the Military Housing Phase I Project in 2019, which are currently at various levels of completion.

I cut the sod a few months ago for the Military Housing Phase II Project, which add 320 additional units to the Phase I accommodation units. Also, there is massive infrastructural developments in the vicinity of the Burma Camp Military Cemetery to provide warehouses, offices and barracks accommodation for Base Ordnance Depot, the School of Ordnance, the Armed Forces Central Band and the Armed Forces Musical School.

As part of efforts to enhance operational capability, combat efficiency, and logistic capacity of the Armed Forces, measures have been put in place, in furtherance of restructuring and retooling. We are determined to equip our Armed Forces to deal with threats in the region, as well as other internal security challenges and contain security threats from Violent Extremists and terrorist groups, along our northern borders.

To this end, additional bases, specialized units and brigades have been created with the acquisition of requisite equipment to enhance operations particularly, along our Northern Frontiers.

As you are aware, this expansion has already seen the creation and establishment of the Army Special Operations Brigade, 15 Armoured Brigade, Signal Brigade, and two Mechanized Battalions which are deployed in the Upper West and Upper East Regions.

The construction and equipping of fifteen Forward Operating Bases (FOB) across our Northern Frontiers for the Armed Forces Northern Border Projects, are on track.

A number of combat vehicles, equipment and weaponry, comprising of about 163 Armoured Personnel Carriers (APC) and other combat vehicles, trucks and general vehicles, surveillance and communications equipment, including optical and critical mass of night vision equipment, as well as weapons, ammunitions and Body Armour, have been acquired to enhance intelligence acquisition, offer better protection, improve mobility and firepower, for troops on internal security operations, including those deployed to our Northern Frontiers, as well as International Peace Support Operations.

Towards enhancing the capacity of the Navy, I recently commissioned four (4) FPBs named VOLTA, PRA, ANKOBRA and DENSU, to protect our maritime resources, especially our offshore Floating Production Storage and Offloading (FPSO) facilities.

All these investments are to ensure that the Armed Forces are well-equipped and motivated to deliver on their primary mandate of safeguarding the peace, security and integrity of the nation and maintaining Ghana’s contribution to international peace and security.

Similarly, the 500-bed Military Hospital at Afari, in the Atwima-Nwabiagya District of the Ashanti Region, would be ready for inauguration by December, 2022.

The expansion and upgrade of the Medical Reception in all the Garrisons to District Hospital status are also on course. Adequate provisions have been made for other sisterly security services, including the Ghana Police, Ghana Prison, Ghana National Fire and Ghana Immigration Services, to receive new healthcare equipment for their smooth operations.

Ghana has won global acclaim from the time we deployed our first peacekeeping troops to then Congo in 1960. I want to emphasize that government attaches great importance to peacekeeping activities and will continue to support the United Nations efforts to achieve global peace through Ghana’s participation in UN Peacekeeping missions in South Lebanon, Mali, South Sudan and The Gambia with Staff Officers and Military Observers, in all UN peacekeeping missions across the globe.

This year, GAF has deployed 570 troops and a Level 2 Hospital with 64 personnel at the United Nations Interim Security Force for Abiye, South Sudan (UNIFSA). With this deployment, Ghana is now the 7th largest Troop Contributing Country (TCC).

In the same vein, Ghana is also involved in Regional Peacekeeping efforts and in addition to our contingents in The Gambia which is made up of 50 Troops, Ghana has deployed a company size contingent of 100 troops, as part of the Economic Community of West Africa States (ECOWAS) force to maintain peace and stability in Guinea-Bissau.

I applaud the Military High Command for the enviable strides chalked by the Armed Forces in Peacekeeping, especially in Gender Parity. Ghana is one of the foremost champions of UN Secretary General’s Gender Parity Strategy, 2018-2028, which seeks to increase female participation, in peacekeeping.

Through Ghana’s partnership with the Canadian Government, the Elsie Initiative, which is involved with female troops participation in UN Peacekeeping Missions, has been a tremendous success. As part of this initiative, a Gender-sensitive Battalion, UNIFIL Ghana Battalion 89, made up of 20% female troops, will be deployed in South Lebanon in September 2022 and this configuration would be replicated in other Missions subsequently.

In order to boost further our image in peacekeeping, we applied and have been selected to host UN Ministerial Conference on Peacekeeping, scheduled for November to December, 2023.

This is an event held every two years and Ghana is the first developing country to host it after Canada and South Korea, hosts of the 2 previous conferences. Hosting this conference is akin to hosting a full UN Conference and we should be proud of ourselves.”