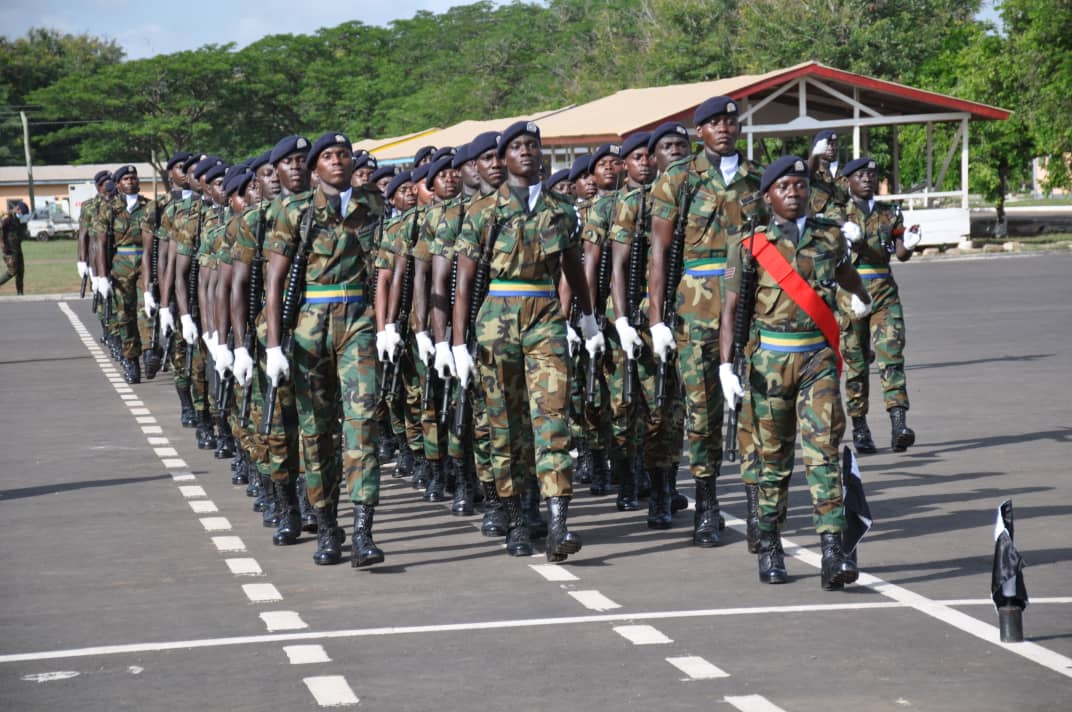 Training Instructors and Non-Commissioned Officers (NCOs), generally, of the Ghana Armed Forces (GAF), have been urged to help lead young soldiers, by constantly reminding them to be of good behaviour as military persons, to enable them mature in their chosen trades, escaping temptations in the execution of their duties, with discipline and professionalism.

The counsel was offered by GAF’s Director General, Plan, Research and Development – Brigadier General (Brig Gen) Richard Addo-Gyane, who was Guest-of-Honour at the Passing-Out Parade for Seven Hundred and Seventeen (717) young soldiers, at the Army Recruit Training School (ARTS), Shai-Hills, in the Greater Accra Region, on Friday, April 30, 2021.

Brig Gen Addo-Gyane admonished the young soldiers to be wary of illegal activities; such as debt collection, land guarding, chieftaincy issues, unauthorized duties, the use of the military uniform for fraudulent activities by some military and non-military personnel.

General Addo-Gyane further advised the new soldiers, not to think of their passing out as the end of their struggles, but to take advantage of abundant resources and measures in GAF (such as the GAF School of Education), put in place for serious-minded soldiers, to develop their career.

Brig Gen Addo-Gyane cautioned the new-entrants to disregard any false notion that the military life is one of comfort, by observing their seniors, the NCOs, who leave their homes and families 24 hours a day, seven days a week, having little or no rest, keeping watch over lives and properties, night and day, rain or shine, at the barracks or in the fields, restricted movements, no time for birthdays, holidays, weekends or religious festivities.

These sacrifices, are what have carved a niche of international and local acclaim for GAF by its forbears, through discipline, self-sacrifice, commitment, hard work, dedication to duty, courage, honesty, and, above all, respect for the supremacy of the Constitution of the Republic of Ghana, hence Brig Gen Addo-Gyane called upon the new soldiers and all who would follow, to tow the order.

722 recruits (656 males) arrived to train at the Recruit Training School, six months ago, however, 717 young soldiers passed-out, with all 66 females, who started the training, finishing, attracting high commendation from the Guest-of-Honour.

As recruits, they were taken through the most basic level of training, such as physical training, tactics, weapon training, drill, military law, map reading, field craft, first aid and liberal education.

The 717 recruits, during the training period, had been grouped into six (6) Companies; Michel, Myohaung, Liberation, Uaddara, Arakan and Kamina.