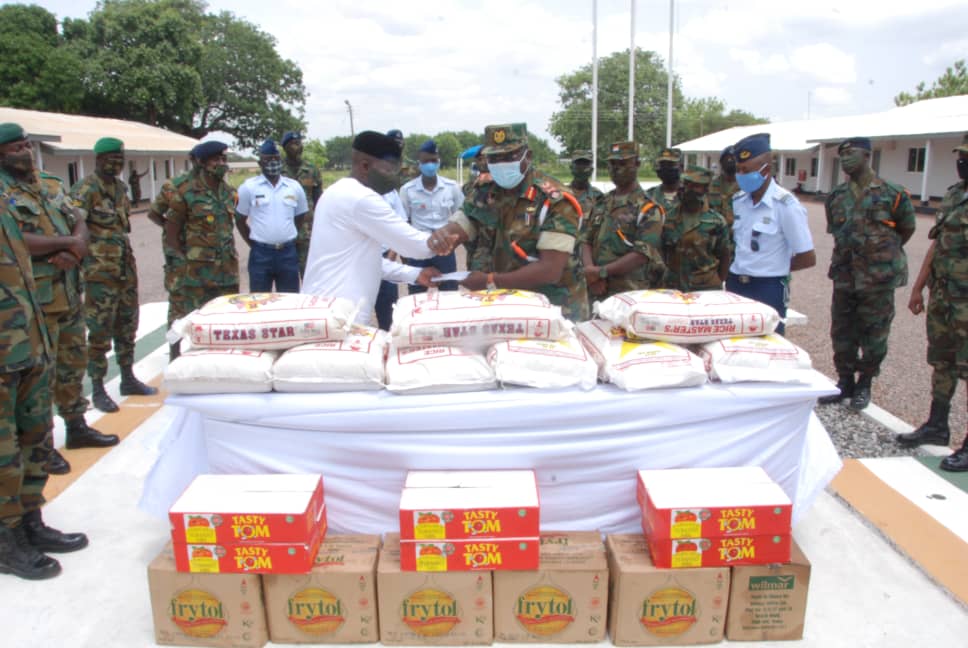 The General Officer Commanding (GOC) Northern Command (N/COMD) of the Ghana Armed Forces (GAF) – Brigadier General (Brig Gen) Moses Mohammed Aryee, has donated to the 6 Garrison Muslim community, assorted food stuffs, as he congratulated Muslims in the garrison, for a peaceful and successful month of fasting and prayers, in the holy month of Ramadan.

General Aryee’s donation comprised nine (9) bags of rice, six (6) boxes of cooking Oil, (6) boxes of canned tomatoes and a sum of GHS 1000, on the behalf of the Chief of the Defence Staff – Lieutenant General (Lt Gen) Obed Boamah Akwa, at a short ceremony held at the headquarters of N/COMD, Nyohini Camp, Tamale, on Friday 22 May 2020.

While commending troops for their steadfastness and commitment to the garrison and the northern regions as a whole, Brig Gen Aryee entreated Muslims in the garrison, to eschew acts of indiscipline by continuing to exhibit professionalism in the discharge of their duties, as he prayed that the blessings from the holy fast, would help maintain the peace and unity in the northern regions.

Receiving the items on behalf of all Muslim troops of 6 Garrison, the Acting Garrison Imam – Yunus Abdallah, thanked the GOC for the donation and prayed Allah to continue to bless the good works of GAF.