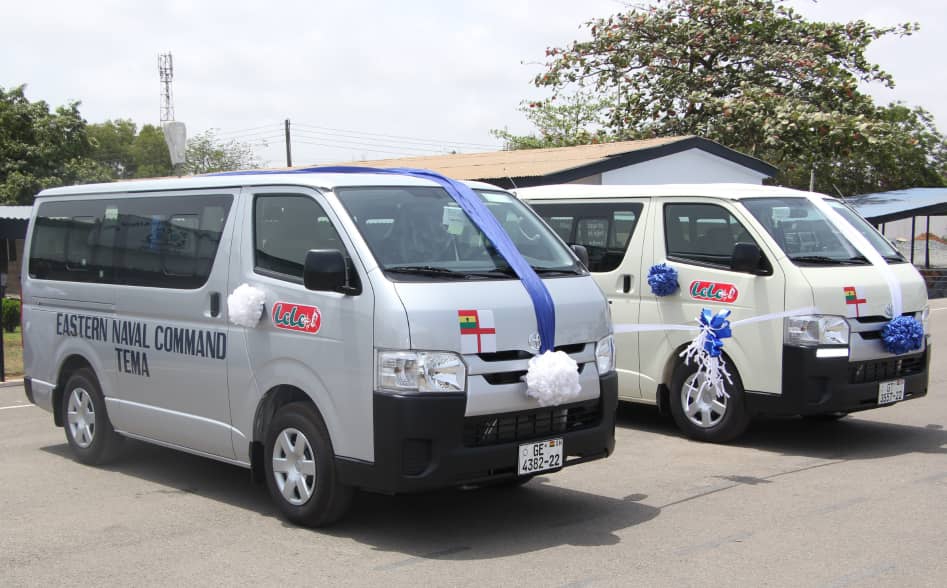 Lele Group of Companies, a conglomerate of nine companies based in Tema, have donated two (2) brand new 16-seater Toyota Hiace minivans to Ghana Navy’s (GN) Eastern Naval Command (ENC), as part of its Corporate Social Responsibilities (CSR), and to facilitate the execution of command duties.

The presentation, which was made by the companies’ Chief Executive Officer (CEO) – Mr Hussein Jaber, was received by the Chief of the Naval Staff (CNS) of the Ghana Armed Forces (GAF) – Rear Admiral (R/Adm) Issah Adam Yakubu, and the Flag Officer Commanding (FOC), ENC – Commodore (Cdre) Emmanuel Ayensu Kwafo, at the Tema Naval Base, on Tuesday, 29th March, 2022.

Receiving the donation, which is worth about GHS 350,000 each, the CNS said the Lele Group of companies have supported the command since they started operations in the Tema Metropolis, having supported the construction of the ENC Command Administration Block, Transit Quarters, the annual West Africa Security Services Socialization Activities (WASSA) of the Command, and made various donations during the emergence of the COVID-19 pandemic.

The CNS, who in return presented a plaque of honour to the CEO, hoped that other corporate institutions and benevolent individuals, would be inspired by the conglomerate’s donations to support the Navy in particular, and the various units of the Armed Forces, largely.

Cdre Kwafo said ENC have been rendering some services to Lele Group in the Command’s area of responsibility (AOR), and in 2021, when there were vehicular challenges at the Command, he urged the company to help and they agreed by providing the vehicles.

The FOC further said although the vehicles have been branded “Eastern Naval Command” and “Tema Naval Base”, when they start working, they would work for everyone in GN and GAF.