The Ghana Battalion (GHANBATT) serving with the United Nations Stabilization Mission in the Congo (MONUSCO) under the command of Lieutenant Colonel Bernard Pantoah organized a Christmas Get-Together for troops of the GHANBATT as part of activities marking the festive season.

The Get-Together was held at the GHANBATT Headquarters in INCAL Complex, Kinshasa on Tuesday 25 December 2018.

The objective of the Get-Together was to bring together all troops and civilian Ghanaians in the mission to commemorate the festive season.

The troops were entertained by the GHANBATT Dance Band music, dancing competitions and ‘Popularity’ contest organised for the soldiers.

The occasion was also graced with a colorful cultural display by the various ethnic groups in GHANBATT namely the Akan, Ewe and Northern Cultural Groups.

In his opening remark, the Commanding Officer of GHANBATT 14, Lt Col BB Pantoah, encouraged troops to use the occasion to make merry and relax as they commemorate the birth of Christ.

He also advised troops to take advantage of the occasion to connect with their families back in Ghana so that their presence could be felt even though they were far from home during the festivities.

The visionary commander of the Ghana Battalion who has received several accolades for implementing innovative measures in practicalizing Peace Operations in the DRC, added that, troops needed to be mindful and focused in the mission even as they enjoyed themselves during the festive season because of the tasks ahead.

The Ghana Contingent Commander and the Commander of the Western Sector of MONUSCO, Brigadier-General Emmanuel Kotia, was the Guest-of-Honour for the occasion. General Kotia in his remarks reiterated that, soldiers from Ghana have performed impressively over the years in the DRC.

He used the occasion to trace Ghana’s contribution to the peace and stability of DRC since the deployment of Ghanaian troops in the DRC in the 1960s under the United Nations Operations in the Congo (ONUC).

Reflecting on the history of Ghanaian troops in the DRC, he acknowledged that Ghana provided the first Contingent of troops to serve with the ONUC and also a pioneering force that served with MONUC/MONUSCO since 2001.

The Contingent Commander applauded MONUSCO GHANBATT 14 for exhibiting a high standard of discipline in the execution of their duties without cause for concern. He particularly praised the Commanding Officer of GHANBATT for being an exemplary leader for his troops.

General Kotia, however, reminded troops to brace up for the tasks ahead of them, as the elections in the DRC draw close. He advised the troops to continue to be vigilant, disciplined and professional in the execution of their duties.

He reminded the troops that their primary responsibility in the mission was the protection of UN personnel and properties as well as Protection of Civilians. He advised all troops to back their tasks with prayer support during the electoral period.

The occasion was graced by both civilian and military dignitaries of MONUSCO as well as members of the international community including the Ghanaian community in DRC. 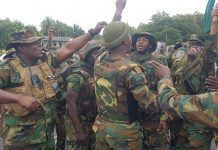 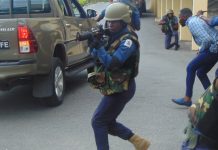 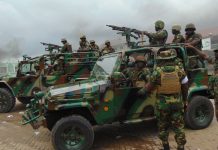 JWS PARTICIPATES IN CLEAN UP EXERCISE AT ACHIASE