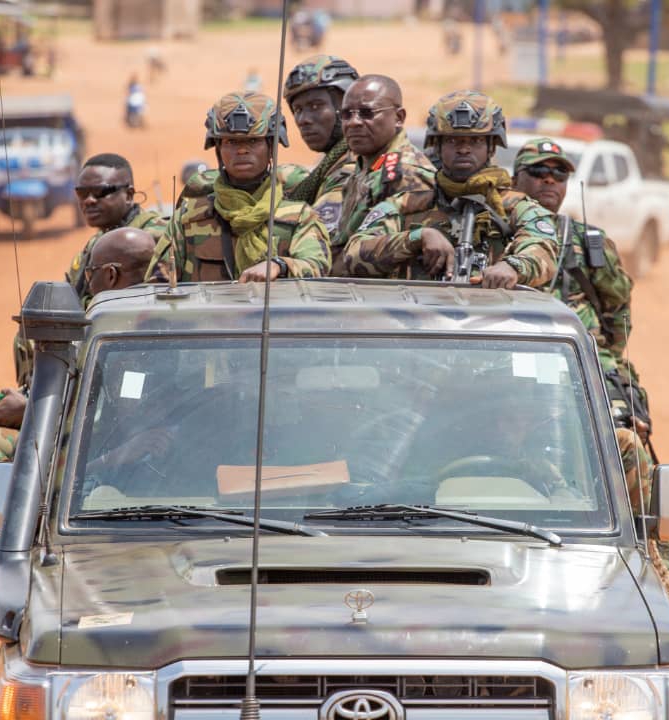 A notable number of security chiefs of Ghana’s national security architecture have visited Ghana Army’s (GA) 11 Mechanized Battalion (11 Mech Bn) and its Area of Operation in the Upper East Region, to help fortify national efforts being made to ward off any threat of terrorism that might project from Ghana’s northern frontiers.

The visit, which was necessitated by emerging threats of terrorism from the Sahel and has so far victimised all of Ghana’s neighbours, saw the delegation at 11 Mech Bn and its Detachment at Mognori, Bawku.

The entourage also visited GA’s Pulmakom Widana Detachment, to ascertain at first hand, the bare facts as regards force protection, boundary issues with neighboring countries and the welfare of troops.

At a Durbar with troops at both detachments, the National Security Minister commended the Soldiers for the good work done so far, stating that personnel of the Unit had stayed true to their constitutional mandate of protecting the territorial integrity of Ghana at all times.

Minister Kan-Dapaah therefore, encouraged the troops to remain professional, hardworking and vigilant in order to continue to protect the North-Eastern frontiers of the country.

The Commanding Officer, 11 Mech Bn – Lieutenant Colonel (Lt Col) Minta-Agyemang, briefed the Minister and his entourage on the operations, training and logistics matters in his Area of Operation.

Ghana Armed Forces, together with other security services, in collaboration with international partners in recent years, have embarked on several counter-terrorism training exercises and operations such as Exercise Eagle Claws, Exercise Burning Arrow and Operation CONQUERED FIST, to deter any would-be terrorist elements or threats, while protecting the citizenry and national assets.