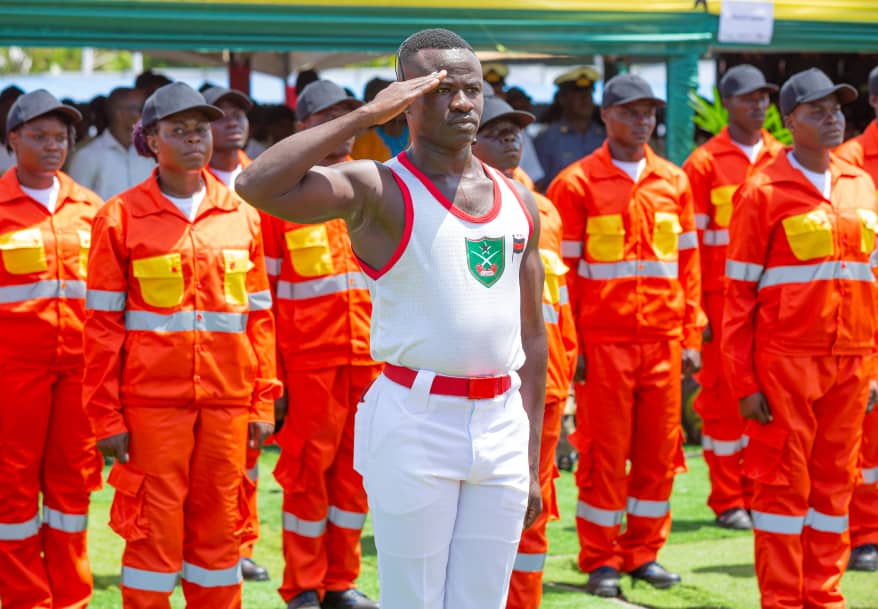 The Ghana Navy (GN) has passed-out 500 lifeguards for the Volta Lake Transport Safety Project (VLTSP), after equipping them with basic skills in water survival and rescue operations, to ensure safety of commuters on the Volta Lake.

The passing-out ceremony which took place at the Dei-Arms Square, Naval Base Tema, Eastern Naval Command (ENC), on Monday, May 30, 2022, comes as a result of a Public Private Partnership (PPP) venture between Ghana’s Ministry for Transport and ECOZOIL Limited (Ltd), a subsidiary of JOSPONG Group of Companies.

The half-thousand lifeguards were selected by ECOZOIL Ltd through the engagement of youth from communities along the Volta Lake and were brought to the ENC Leadership Training School on April 10, 2022, where they were trained for 6-weeks in cleaning landing sites, providing, inspecting and maintaining life jackets to boat owners, checking overloading of boats, undertaking rescue activities, giving first-aid to accident victims and educating boat users and owners on safety practices on the Volta Lake.

Speaking as the Guest of Honour at the program, Ghana’s Minister for Transport – Kwaku Ofori Asiamah, said as part of the partnership, the Government of Ghana is providing lifejackets for commuters on the Volta Lake, safety education, speedboats to patrol the waterways for real time updates to all relevant stakeholders and, employment to improve upon livelihoods.

The Minister hinted that with support from the Korean Import and Export Bank, a feasibility study has been completed for improving the Volta Lake Transport System, and aims to enhance accessibility and safety of inland water transport, by developing an integrated, effective, and reliable water transport system, connecting isolated communities, and providing them with better access to socio-economic services and increasing safety and efficiency on the Lake.

As part of this VLTSP, ten (10) landing stages will be constructed, new ferries procured as well as construction of a new Slipway Shipyard for shipbuilding and repairs, to position the Volta Lake as a major transport artery, the Minister furthered.

The Chief of the Naval Staff (CNS) of the Ghana Armed Forces (GAF) – Rear Admiral (R/Adm) Issah Adam Yakubu, stated in a speech at the event that part of his vision is to avail services and expertise of GN in advancing the interest of Ghana, thus the GN provides assistance to both government and non-governmental institutions in training and other endeavours.

He further stated that GN has partnered the Ghana Maritime Authority, the Volta River Authority, the Ghana Ports and Harbours Authority, Narcotic Control Commission among other institutions, in shaping lives and bringing progress and development, recalling that about a decade ago, the ENC trained the ECO-BRIGADE of the then ZOIL Limited.

Referring to an accident of a capsized boat, which happened at Dzemeni, along the Volta Lake on April 14, 2022, Admiral Yakubu averred that accidents on the inland water transport sector are tragic when they happen and therefore, need bold interventions such as has been done by the Ministry and ECOZOIL.

He urged the lifeguards to be keenly mindful of load line markings on boats, to ensure that boat owners and operators do not indulge in overloading, which is a serious cause of boat accidents, reminding all that if the inaugurated arrangement had been in place at Dzemeni, it could have prevented the loss of lives in that fatal accident.

The CNS called for support from partners and other philanthropic organizations in terms of vehicles and infrastructural development, to improve training and operations of the Navy, which is fervently contributing its quota to the development of Ghana, in addition to maintaining the maritime integrity and the Exclusive Economic Zone of the country.

Recalling issues of the Dzemeni boat disaster, Cdre Kwafo said the Navy was previously deployed with the assistance of the Ghana Maritime Authority at Dzemeni, unfortunately, in 2018, there was a revolt against that deployment which necessitated them leaving, after which the disaster occurred; a storm arose on the river, but the boat brazenly sailed amidst the storm.

The Commanding Officer (CO) of the Leadership Training School (LTS) – Lieutenant Commander (Lt Cdr) Salifu Musah, presenting his report for the training period, said Basic Lifeguard Training course was designed to develop swimming skills of the trainees, develop their water confidence and equip them with the basic techniques for survival at Sea or water survival.

Lt Cdr Musah stated that the trainees were screened medically at the ENC Medical Centre, upon arrival, after which the training took the form of classroom lectures, presentations, open demonstration for Firefighting and First Aid, swimming pool as well as harbour demonstrations of confidence jump and water survival skills.

The Executive Director of Jospong – Dr Joseph Siaw Agyepong, said the VLTSP idea, which elapsed in 2016, and was renewed in 2021, draws youth from 9 Regions that have been identified as accident-prone areas and covers 40 Metropolitan, Municipal and District Assemblies.

Dr Agyepong announced to spontaneous applause of the gathering that the management of ECOZOIL has decided to support the VLTSP by providing three (3) speedboats to the Ghana Navy, for river monitoring and operations.

Recalling the circumstances that preceded the project, the Executive Director said there were challenges such as lack of live-jackets for commuters, consistent overloading of boats, insanitary conditions at landing sites, heaps of refuse piles along the shores, lack of safety awareness, added to the fact that the youth in such areas were not engaged in gainful employment.

Other dignitaries present at the event included members of Ghana’s Parliament Select Committee on Transport, Member of Parliament for Tema East, Senior Officers from the Naval Headquarters and the ENC and the Acting President and Mankralo of the Tema Traditional Council – Nii Adjetey Agbo.