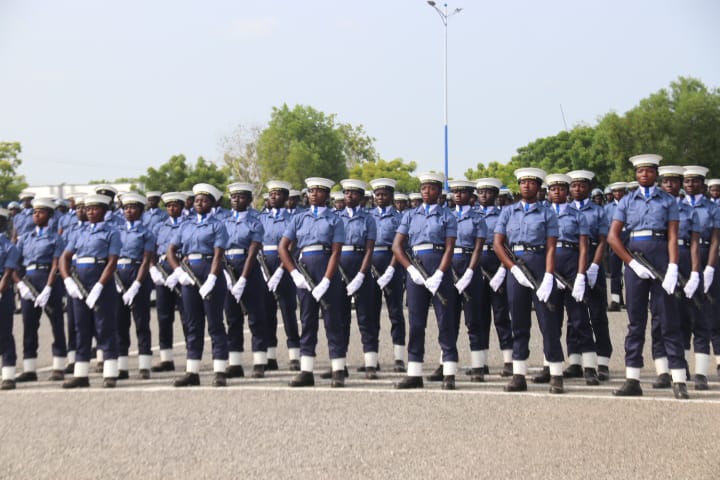 The Naval Recruit Training School (NRTS) of Ghana Navy’s Naval Training Command (NAVTRAC), has passed out four hundred and thirty-six (436) Recruits, after they had been through 24 weeks of extensive Standard Military Training and Basic Naval Training (BT 83).

The fresh Ordinary Seamen were granted access into the prestigious Sea-Lords fraternity after a passing-out parade at NAVTRAC Headquarters, Nutekpor, near Sogakope, in the Volta Region of Ghana, on Friday, July 22, 2022, with the Review Officer of the Parade being Commodore (Cdre) Samuel Agyenim-Boateng – Principal General Staff Officer at Ghana’s Ministry of Defence.

The Able Seamen Class 2 (AB2), Class of BT 83, who were admitted to the NRTS on 21 January 2022, were made up of 96 females and 354 males, however, fourteen of them were not able to finish the training on various disqualifying grounds.

Cdre Agyenim-Boateng instructed the Young Ratings to be mindful of the Rules and Regulations governing the use of military uniforms in Ghana, to be wary of the use of social media with military accoutrements, not to see themselves as above the Constitution, not to be debt-collectors, land-guards, recruitment agents into the Ghana Armed Forces, nor bodyguards to private persons without express permission, nor be involved with partisan politics.

He urged them to remain disciplined and maintain their physical fitness, as they will be required to undergo regular Basic Fitness Tests (BFT), as long as they remained in the Ghana Navy, and to refrain from acts that would tarnish the positive image of the Ghana Armed Forces.