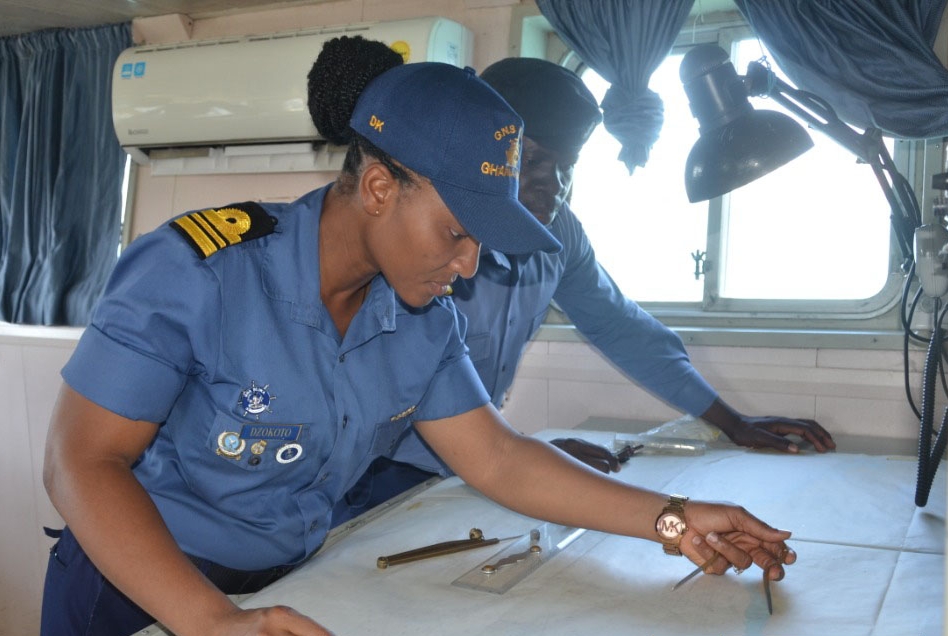 History has been made in the Ghana Navy (GN) as the Chief of the Naval Staff (CNS) – Rear Admiral (R/Adm) Issah Adam Yakubu has appointed the first female Commanding Officer (CO) of a Ghana Navy Ship (GNS) – Lieutenant Commander (Lt Cdr) Priscilla Ami Dogbeda Dzokoto, to make an entry onto the command and leadership of the male-dominated naval domain.

Lt Cdr Dzokoto, who is the CO of one of GN’s River Class Ships, GNS ANKOBRA, was first appointed to be CO the GNS BLIKA on Monday, 11 April, 2022, and has already been tasked with her ship to join her Nigerian counterpart, for a maritime exercise which commences from 26 May to 1 June 2022, with the aim to establish a combined maritime Task Force amongst the Navies of the Gulf of Guinea states and those along the Eastern/Southern African coastline.

Lt Cdr Priscilla Ami Dzokoto (PAD), was born on Saturday 8 March 1986 in Takoradi in the Western Region of Ghana. She had her Basic and Junior School Education at Pentecost Preparatory and JSS in Takoradi and proceeded to Holy Child School, Cape Coast for her Senior Secondary School Education.

She completed Holy Child in 2004 and proceeded to the University of Ghana, Legon where she gained admission to read Mathematical Science. She graduated in 2009 with a Bachelor of Science Degree in Statistics and Computer Science.

On commissioning, she had various courses and training both locally and internationally to prepare her towards her Naval career, and had her initial training at the Britannia Royal Naval College, Dartmouth in the United Kingdom in 2013.

Lt Cdr Dzokoto later underwent Sub Lieutenants Technical Course in Ghana in 2016, and subsequently, she attended the Navigation Direction School in Kochi, India from July 2021 to February 2022 where she graduated as a Navigation Specialist.

The CO also holds certificates in Maritime Interoperability Training from the United Kingdom, Remote Sensing and Geographic Information System, Combating Weapons of Mass Destruction Proliferation and Maritime Risk Assessment certificates all in Ghana, and completed the Junior Staff Course at the Ghana Armed Forces Command and Staff College (GAFCSC) in 2019, where she came out as the 2nd best student.

Lt Cdr Dzokoto was first posted to GNS NAA GBEWAA as a Watch Keeping Officer in September 2012, and while onboard, she was appointed the Assistant Communications Officer of the Ship, where her responsibilities included the functioning and maintenance of all communications equipment on board, the training and welfare of all Ratings in the Communication Department, ensuring the effective and efficient communication between the ship and other Military Units/Civilian Establishments, among others.

She was the Assistant Navigation Officer onboard GNS YAA ASANTEWAA when the ship sailed to Nigeria to participate in Exercise Obangame Express in 2014. She played an instrumental role in planning and executing the passage from Ghana to Nigeria.

Apart from serving onboard, she also served in a training school where she imparted to others the knowledge she had acquired, and was the Training Officer and subsequently the Acting Second in Command of the Navy Trade Training School (now School of Marine Engineering and Combat Systems, SMECS) from January 2018 to June 2021l where she assisted the CO in the administration and daily running of the school.

Her other responsibilities included coordination and administration of all courses, monitoring the progress of trainees, review of examination questions for standardization, periodic review and update of course syllabi and monitoring and supervision of all training activities among several others.

In the area of peacekeeping, Lt Cdr Dzokoto served as a Military Observer with the United Nations Interim Security Force in Abyei (UNISFA), from February 2020 to February 2021.

Lt Cdr Priscilla Ami Dogbeda Dzokoto combines her military career with motherhood, for she is married with 2 children, with hobbies including reading, listening to music, sightseeing and participating in sports.