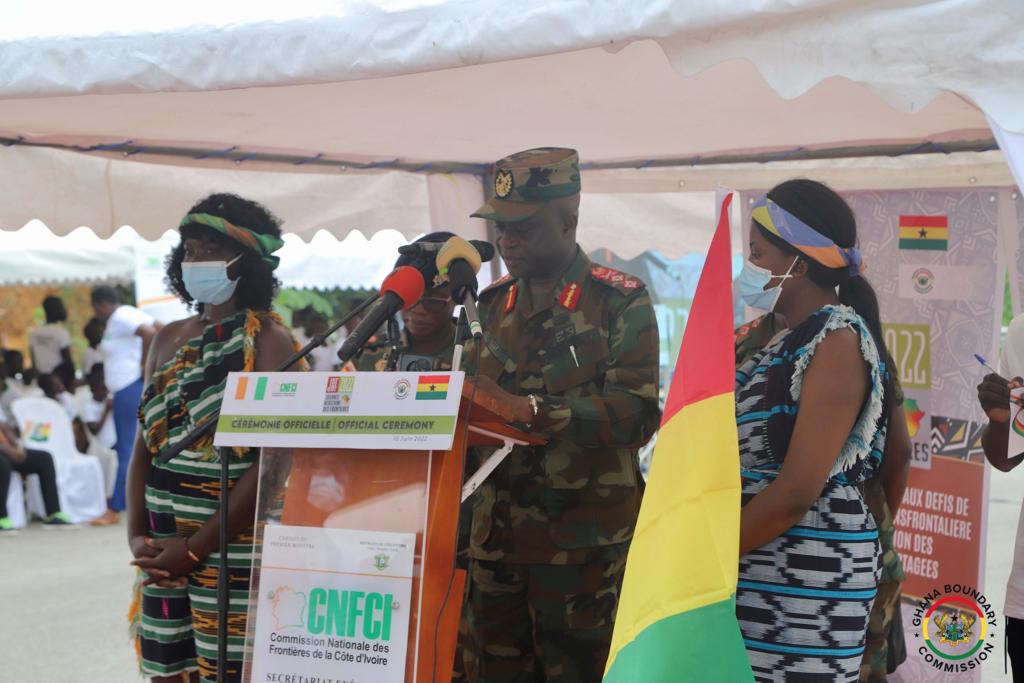 The commemorations started from Tuesday, 7 June to Friday 10 June 2022, under the theme “Challenges of Cross-Border Cooperation and Management of Shared Resources”, and took place in the border towns of Elubo, on the Ghanaian side and Noé, on the Ivory Coast divide, where the GhBC and CNFCI, sensitized the two communities on the need for conscious and concerted efforts for cross-border cooperation, in managing common natural resources.

Whiles a tree-planting exercise was undertaken along the Tano River – which serves as a boundary between the two West African neighbours – to safeguard the environment and restore the forest cover of Elubo and Noé/Nougoua, residents were also impressed upon to respect and protect the common international boundary, for peaceful coexistence.

In his remarks, Mr Darko-Mensah opined that even though the African Union has been celebrating Border Day for the past 12 years, the celebration has not caught on with the people, and therefore urged all to use the occasion as a drive, to project awareness of the celebration and safeguard the borders.

He further stressed that it was incumbent for both communities to protect their cherished flora and rivers, by preserving their common forests and mineral resources, as well as the River Tano, one shared by both Ghana and Côte d’Ivoire.

On his part, Major General Kotia used the opportunity to admonish all to be vigilant and work in synergy, to combat violent extremism, as terrorist activities continued to ravage African countries along the borders, especially, in recent times.

The tree planting exercise was consistent with the annual Green Ghana Day agenda by the Ghana Government, which was spearheaded by President Nana Addo Dankwa Akufo-Addo, whiles school children of the two border towns, also participated by engaging in a march past, to add colour to the celebrations.

Other activities organized for the commemoration were a football match between the people of Elubo in Ghana and Noé in Cote d’Ivoire, free health screening exercise for the two border town communities, as well as commissioning of rehabilitated boreholes at Nungua and Cocoa Town (border towns along the boundary).

Other dignitaries present were the Regional Minister for South Comoé in Côte d’Ivoire, the Special Adviser to the Ivorian Prime Minister – Mr Daouda Ouattara, and the Elubo Border Security Committee.