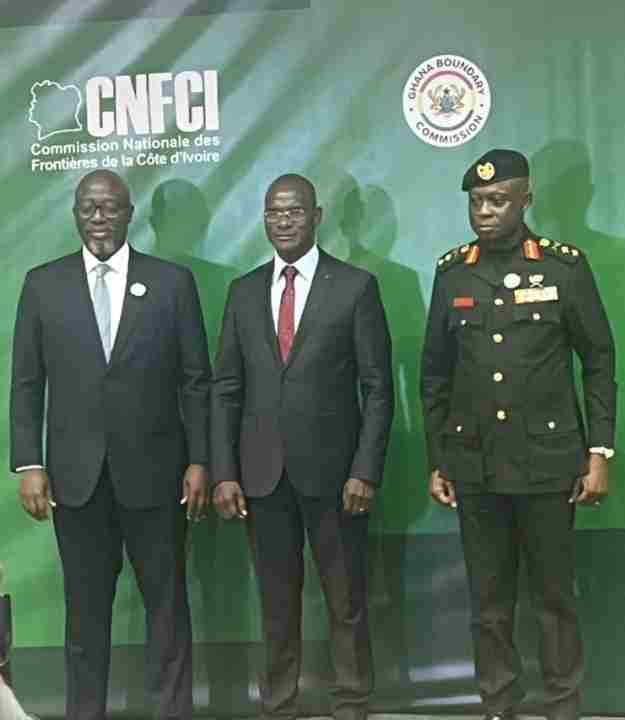 An inaugural ceremony for the Joint Technical Commissions (JTC) for the Reaffirmation and Materialization of Land and Maritime Boundaries between la Cote d’Ivoire and Ghana, has been held in Abidjan.

The ceremony took place on Tuesday, 23 August, 2022 with the Ghana Boundary Commission (GhBC) and the National Borders of la Cote d’Ivoire (CNFCI), the respective operational institutions of the two West African neighbours, beginning discussions with a view to kickstart the process that should lead to the materialization and the resolution of problems identified along their border line.

The deliberations are to occur within the framework of strengthening cooperation between Côte d’Ivoire and Ghana for the consolidation of security and peaceful coexistence along their common borders, with their operational institutions.

The Prime Minister of Ivory Coast, who was to be the Guest-of-Honour at the ceremony, was represented by Lieutenant General (Lt Gen) Diomande Vagonde – Ivorian Minister for Interior and Security, whiles the Executive Secretary for CNFCI – Mr Diakalidia Konate and the National Coordinator of the GhBC – Major General (Maj Gen) Emmanuel W Kotia, were present with their staff, with representatives from Burkina Faso, Guinea and Sierra Leone, who were present as Observers.

The inauguration ceremony follows a contact meeting held by GhBC and CNFCI in Accra, Ghana on 24 February, 2022, between the Executive Secretariat of the Ivorian Commission and its Ghanaian counterpart, where the duo agreed to set up a JTC for the management of the boundary between Ghana and la Côte d’Ivoire, in order to identify all concerns.

At the Accra meeting, the operational institutions were assigned the tasks to 1) draw up a program for the reaffirmation of the borders (replacement of all the damaged markers), 2) draw up a delimitation/demarcation program for certain border lines, 3) draw up a roadmap to respond to all border concerns and, 4) identify the priority actions to be taken to strengthen cross-border cooperation.

The parties also agreed to set up a JTC on Maritime Border Management, which will be responsible for drawing up a Joint Framework Agreement on all aspects related to maritime issues, to ensure the implementation of decisions of the International Tribunal for the Laws of the Sea (ITLOS).

The February 2022 deliberations between the two institutions resulted in an agreement to hold their maiden conference on August 23 and 24, 2022, at the Hotel Palm Club, in Abidjan, Côte d’Ivoire, with the aforementioned as set agenda for the Abidjan meeting.

The Abidjan meeting will seek to install instruments and mechanisms which would facilitate the implementation of the recommendations that proceeded from the Accra meeting in February 2022.

The meeting would produce the following results; i) Set up the JTC for the Reaffirmation of the Land Borders, ii) Set up the JMTC for the implementation of the Decision of ITLOS, iii) Examine the project agreement – cross-border cooperation framework, iv) Find points of agreement concerning solutions to be brought to the problems of pollution of rivers and causes in the common cross-border areas.

Additionally, the cooperation would have to v) Finalize the conditions for organizing the tripartite meeting of Cote d’lvoire–Ghana–Burkina Faso, within the framework of the ESCO–VOLTA cross-border area; and vi) Set up the modalities for the creation of other cross-border areas between la Côte d’Ivoire and Ghana.

Beyond the specific objectives mentioned above, the Abidjan meeting should allow the two Commissions to examine the possibilities of setting up consensual technical mechanisms to facilitate the governance of common borders between Côte d’Ivoire and Ghana, by setting up a JTC on the land borders between the two countries, to adopt its regulatory texts and its work schedule.

It will also facilitate the setting up of a JTC on Maritime Boundaries, which would be responsible for drawing up a Joint Framework Agreement on all aspects of maritime issues, to ensure the implementation of decisions of ITLOS, and adopt its regulatory texts and work agenda, and the adoption of the mode of financing of the two JTCs.