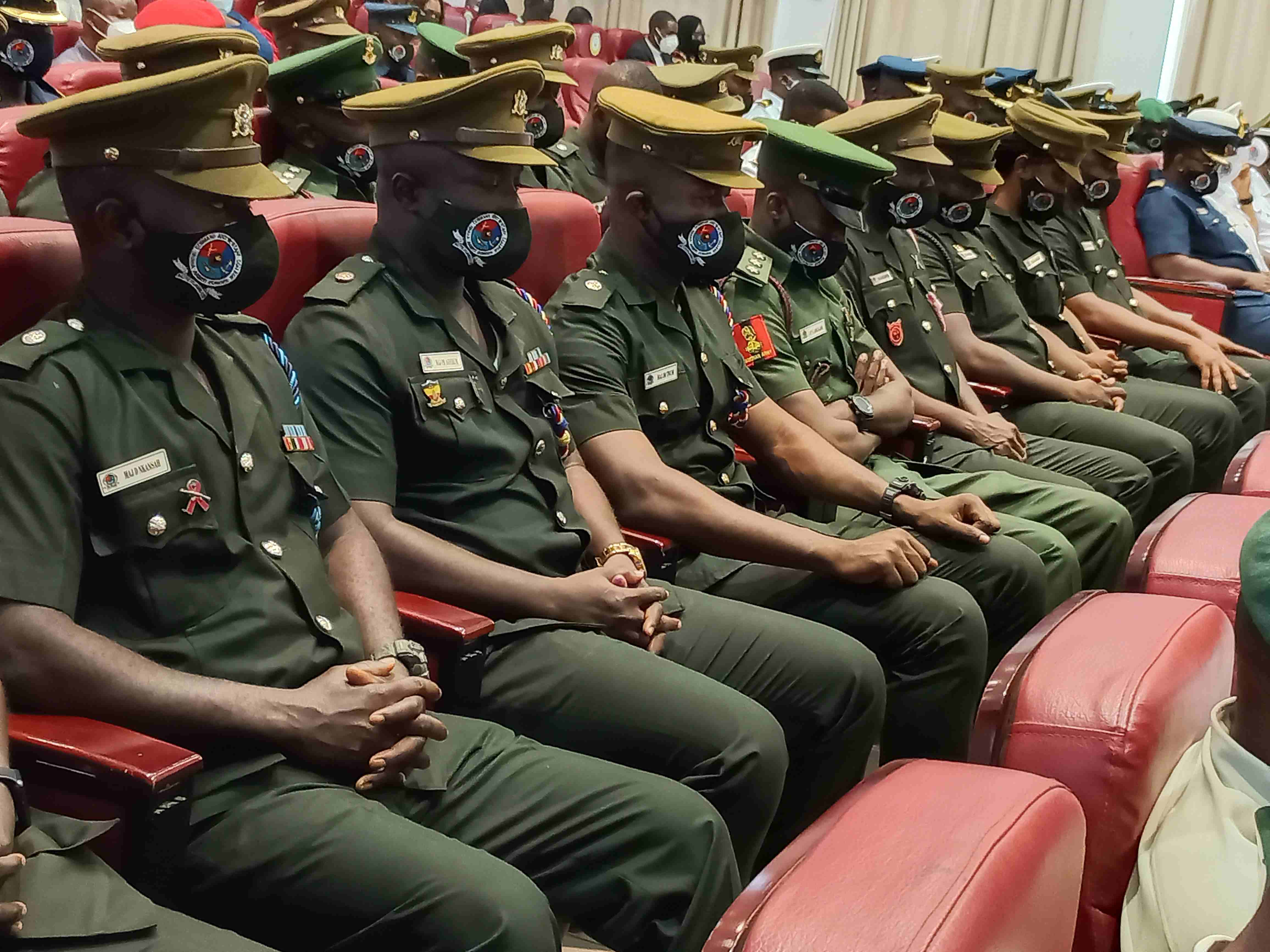 A retired Military General and a former Commander of the Army Combat Training School (ACTS) has told Officers that after acquiring knowledge from the Ghana Armed Forces Command and Staff College (GAFCSC), they cross the red-line where a bugle-sound could call them up to duty to anywhere and at any time, when they least expect.

Brigadier General (Brig Gen) Delali Sakyi (Rtd), who is also a former Assistant Commandant (ASCOM) at GAFCSC, was speaking as the Guest-of-Honour at the graduation ceremony of 62 Officers of the Military College’s Junior Staff Course No. 77, after 19 weeks of pursuit of academic excellence at the Hamidu Hall, on Friday, June 24, 2022.

“The knowledge you have gained will put you in strong position to appreciate and effectively manage the multi-dimensional challenges that are bound to confront you in your career and beyond”, the retired General encouraged the military Officers.

Speaking of allied students from West African countries of Liberia, The Gambia and the Federal Republic of Nigeria, who participated in the Course, Brig Gen Sakyi said their involvement gives sustained credibility to GAFCSC, as an esteemed military college.

As future commanders and staff officers, the Guest of Honour urged the graduands to be astute; meticulous and steadfast, develop an inquiring mind, seek and commit themselves to practical problem-solving for personnel, covering their training, day-to-day administration and welfare.

The Commandant of the military college – Rear Admiral (R/Adm) Moses Beick-Baffour, presented an honorarium and a copy of the College’s journal to Brig Gen Sakyi, for his contribution in raising the Centre of Excellence to its present pedestal.

Reporting on Junior Staff Course 77 for the First Half of the Training Year 2022, the ASCOM, Junior Division – Brig Gen Albert Kwadwo Dawohoso said on 4 February 2022, sixty-two students converged and commenced lectures on 7 February 2022 with one each from The Gambia and Liberia, ten from Nigeria and fifty from the Ghana Army, Navy and Airforce.

He said the Course aimed at training selected Officers to perform Staff Functions by developing their leadership, analytical and communication skills, while providing the foundation for their subsequent career development.

He added that in view of the objective, only students who are able to prove their ability to meet the Course standards are awarded the symbol jsc which signifies that the graduand has passed the Junior Staff Course – an achievement that compares favourably with similar standards within militaries elsewhere in the world.

As part of the experiential studies package of the Course, Junior Staff Course 77 undertook an Environmental Study Tour to the Western North Region of Ghana, to conduct research into some of the existing challenges to the development of the Region.

Other areas of the study were; 4) Increasing female participation in the local governance structure of the Region and 5) Effective collaboration by various security agencies and the civil authorities, for enhanced security for socio-economic development of the Region.

The selection of the themes was done in consultation with the Ministry of Local Government, and the non-military lectures on national and international issues during the Course, were handled by lecturers from the University of Ghana, Ghana Institute of Management and Public Administration (GIMPA) and some state agencies.

There also was a 2-week Internal Security and Counter-Intelligence package of the Course, which culminated into the final exercise codenamed Exercise OMBUDSMAN – an indoor practical exercise, where students were rehearsed and tested on Internal Security Management, with a target to equip students with sound skills to plan and implement internal security operations, in support of civil authorities in a cogent integrated manner.

Officers for Junior Staff Course 77 ranged from the Army rank of Lieutenant Colonel to Captain with its equivalent in the Navy and Airforce.
Other dignitaries present at the ceremony included the Assistant Commandant Senior Division, Defence Advisor at the British High Commission – Commander Richard Walters, Staff Officers from the Service Headquarters, Department of Training (General Headquarters), Directors and Chief Instructors of the College.