The changes at the Ghana Armed Forces (GAF) hierarchy, as directed by its Commander-in-Chief – His Excellency Nana Addo Dankwa Akufo-Addo, fully took effect as the Army’s Commander – a revered General and a Ranger, handed over the flag and baton to a General from Armour, to take over and steer the helms of affairs.

The handing/taking over ceremony from the outgone Chief of the Army Staff (COAS) – Major General (Maj Gen) William Ayamdo (Rtd), to the incoming COAS – Maj Gen Thomas Oppong-Peprah, which took place at the Army  Headquarters (HQ), Command Road, on Tuesday, 18th February, 2020, was full of open camaraderie and esprit de corps, as it was supervised by the Deputy Defence Minister – Major Derrick Oduro (Rtd).

General Ayamdo, who begun his military career in January, 1980, in endearing the new COAS to his troops, waxed biblical in his farewell speech, urging them to preserve the essence of their institution, as salt is to its application and being full of light, as in Matthew Chapter 5 verse 2.

General Ayamdo, who was appointed to the position of COAS on 3rd March, 2017, was highly praised for his contribution to the Army, GAF and Ghana, at large, in a glowing citation presented by the Chief of the Defence Staff (CDS) – Lieutenant General (Lt Gen) Obed Boamah Akwa.

The citation also extolled the Ranger, for “the execution of the elaborately planned Army Week Celebration (13th to 29th September, 2019), which showcased the Ghana Army, in the most positive light. Your concern for the welfare of your troops, resulted in accelerated construction of troops’ accommodation, office infrastructure including the new Army Headquarters, excellent output as the Chairman of the Armed Forces Provident Fund and many welfare packages”.

Then on Wednesday, the 19th of February, 2020, the then Chief of Staff, General Headquarters (GHQ), and now COAS – Maj Gen Thomas Oppong-Peprah, successfully handed over to Rear Admiral (R/Adm) Issah Adams Yakubu.

The affable General Oppong-Peprah, Regular Career Course Intake 26, in another citation presented to him by General OB Akwa, was posted to the Armoured Reconnaissance Regiment and held several key appointments including Commanding Officer (CO) – 64 Infantry Regiment.

The citation also extolled the COAS for his ingenuity amidst budgetary constraints, his ability to achieve numerous successes with judicious use and control of meagre resources available, through hard work, loyalty and leadership skills, supervising great cohesion at GHQ, as well as the maintenance of esprit de corps of the service.

Major landmarks to his credit, within the short stint as CoS – from 8th January, 2019 to 18th February, 2020 – was seeing to the successful completion and implementation of the GAF salary review, the completion of the Command Officers’ Mess’ rehabilitation and furnishing, considerable progress of the barracks regeneration projects, which are now at the final stages of completion.

In remarks to fellow senior officers at a reception, General Oppong-Peprah generously and humbly credited CDS General Akwa, under whom he served as Army CSO, when the CDS was COAS, for teaching him much of the knowledge behind his successes, and also attributed his achievements to teamwork. 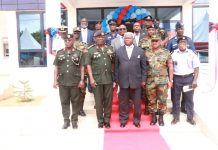