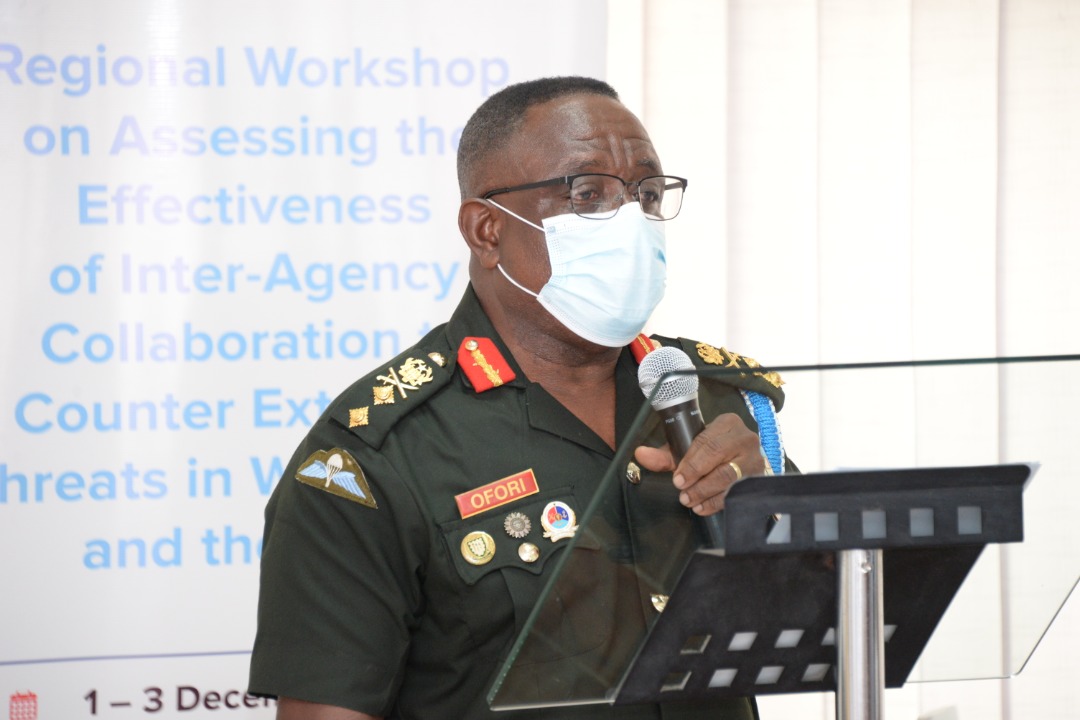 The Commandant of the Kofi Annan International Peacekeeping Training Centre (KAIPTC) – Major General (Maj Gen) Francis Ofori, has called for the reinforcing of cooperative engagements amongst state security agencies, given the increasing pressure along the northern borders of Benin, Cote d’Ivoire, Ghana and Togo.

Maj Gen Ofori made the call, during the opening ceremony of a Regional Workshop dubbed “Assessing the Effectiveness of Inter-Agency Collaboration to Counter Extremist Threats in West Africa and the Sahel”, held at Prampram, on Tuesday, 1st December, 2020, as a follow-up to an earlier one held in 2019, at the Golden Tulip Hotel, Kumasi.

The KAIPTC Commandant also stated that the threats posed by violent extremism is structurally embedded in both state and regional security complexes and as such, it is unlikely that any single state in the sub-region could address the challenge alone.

Emphasizing the lethality and recurrence of extremist and militant attacks with the indiscriminate civilian and military targets, General Ofori further stated that, the expansion of extremists’ activities, with focus shifting to coastal states in West Africa, coupled with the vulnerabilities by COVID-19, should galvanize local communities and other civil society actors, in reducing such threats.

The Commandant revealed that, the second workshop was to document progress made so far in countering violent extremism in the targeted countries, with particular focus on how networks, connections and information sharing among state and non-state agencies, have shaped on-going responses to violent extremism in the West Africa sub-region, since 2019.

The Australian High Commissioner to Ghana – His Excellency (HE) Gregory Andrews, who was the Special Guest for the workshop, in an address, reiterated General Ofori’s call, emphasizing that inter-agency collaboration between countries, is indispensable to countering violent extremism and that, Australia has had minimal incidences of the menace, due to strong co-operative and collaborative engagements between agencies.

HE Andrews, added that lax and porous borders in Africa, contribute to terrorist activities in the sub-region, and that extremism takes a toll on economies and development of affected countries, negatively impacting vulnerable groups like women and children, as he urged participants to share ideas on ways to deepen inter-agency efforts, to mitigate and forestall violent extremism.

The three-day Regional workshop, created space for participants to deliberate on progress made so far, in countering violent extremism in West Africa and the Sahel, and assess the effectiveness of inter-agency collaboration and information sharing, to stem violent extremism in the region.

Other dignitaries present at the opening ceremony included the Director of the Faculty of Academic Affairs and Research (FAAR) – Professor Kwesi Aning, the Director of Training, KAIPTC – Colonel Paul Tanye-Kulono and the Deputy Director of FAAR – Dr Emma Birikorang.