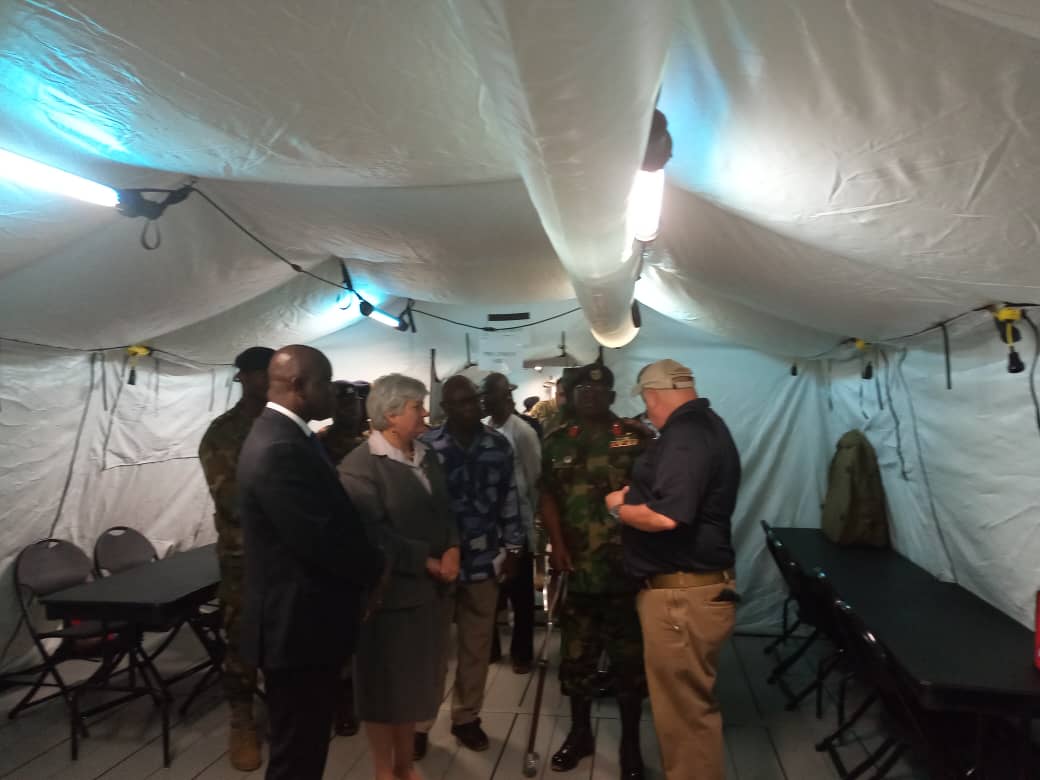 The Ghana Armed Forces (GAF) has received a donation of two (2) United Nations Level II Hospitals, by the government of the United States of America (USA) as part of the medical component of the African Peacekeeping Rapid Response Partnership (APRRP), to facilitate the rapid deployment and the operation of a standard UN Level II Hospital.

On Tuesday, 4th of February, 2020, the presentation of the two facilities, valued at USD 6.5Million which are comprised in 19 containers and 8 generator sets, one of which have since been installed for a tour during the vendor training prior the inauguration, was done.

APRRP is a cooperation on numerous joint training military exercises between US and six selected African countries, designed to increase the effectiveness of their forces’ abilities to respond to international threats; such as trafficking in drugs and humans, terrorism, regional and international instability.

The medical component of the APRRP is composed of training and equipment and has an overall aim to help GAF to institutionalize some specific programs, and to open up training sessions to qualified medics in Ghana and the sub region.

The Ambassador of the US to Ghana – Her Excellency Stephanie Sullivan, in the presentation stated that the medical component of APRRP is designed to strengthen and institutionalize the medical capabilities and processes of the GAF to rapidly deploy, operate and sustain the UN Standard level 2 hospital, for peacekeeping operations and response to emerging crises in Africa.

Currently, the US and GAF have conducted three medical APRRP training sessions and GAF personnel, both medical and non-medical, are receiving Level II hospital training in setting up and operating the deployable hospital.

The Minister for Defence and Member of Parliament (MP) for Bimbilla – Dominic Nitiwul, said the shared platform between GAF and the US partners, provided the GAF participants, the opportunities to tap into the many years of deployment experience, especially in the area of medical, planning, logistics and biomedical equipment repairs, field sanitation, vendor training and Advance trauma life support.

“One of the hospitals is specially set up to provide continuous training for GAF medical personnel, when preparing to deploy in any mission whiles the other is set for rapid deployment for any UN mission, as and when required”, the Defence Minister stated.

Minister Nitiwul added that a total of 50 GAF personnel, have been trained as ‘Trainers of Trainees’ by the US facilitators, whiles Clinical Ultrasound Medical Modelling and Stimulation, Internal Trauma Life Support, Trauma Nursing and Field Sanitation workshops are also scheduled to be conducted this year.

The Minister said that the ultimate aim of the package is to institutionalize all the courses under a military trauma nursing school for the entire country.

Dignitaries present at the ceremony included the Chief of the Defence Staff – Lieutenant General (Lt Gen) Obed Boamah Akwa, the Service Chiefs, the Commander of the 37 Military Hospital – Brigadier General (Brig Gen) Nii Obodai and others.