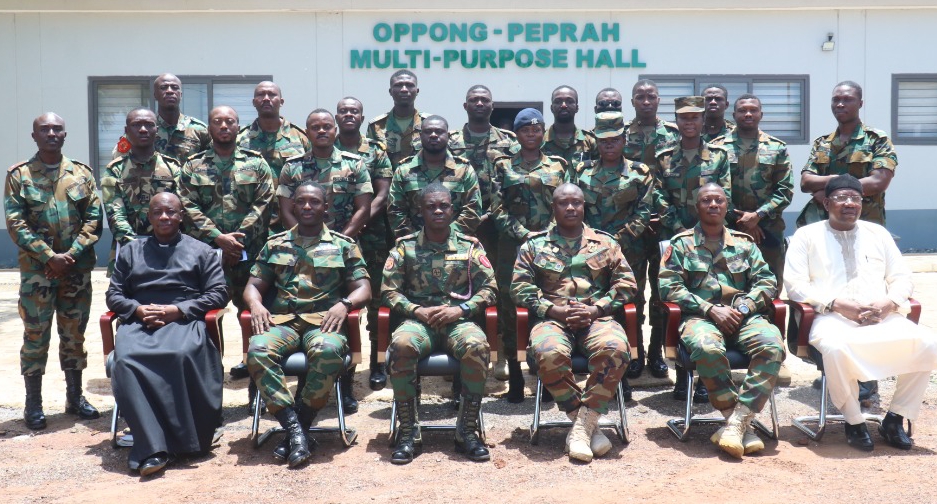 The military religious ceremony was held on Sunday, May 1, 2022, at the Oppong-Peprah Multipurpose Hall, Bundase, under the theme “Everybody Needs Somebody” with all Key Appointment Holders and the entire battalion present.

Speaking to his troops after Christian and Muslim prayers had been offered, the Commanding Officer (CO) of the UNMISS bound GH 10 – Lieutenant Colonel (Lt Col) Prince Eric Tandoh, initiated his speech with a Scripture from Luke 22:26 – “But it is not this way with you, but the one who is the greatest among you must become like the youngest, and the leader like the servant’’.

The CO, who is same for Ghana Army’s (GA) Fifth Infantry Battalion (5Bn), which forms the nucleus of the 700 All-Ranks UNMISS GH 10, outlined his vision for the tenure, being; ‘‘To build a united GHANBATT, dependable and operationally excellent with mission accomplishment as its top priority.’’

With a mission; “To maintain a robust, highly motivated and well-trained soldiers with a winning attitude in order to achieve the end state of higher command”, Lt Col Tandoh, who was appointed for the GHANBATT 10 charge on 18th January, 2022, presented his core values as training, the welfare of troops, human-centredness, mutual respect, developing leaders and professionalism in turnout and conduct.

The CO urged the team to maintain discipline at all times, adhere to the Camp Standing Orders at BTC, which would be similar in the Mission Area, take good care of their individual selves, desist from all manner of drug abuse, and to take training seriously, since good training would ensure ability to surmount real life security challenges that may arise in the Mission Area.

Lt Col Tandoh expressed gratitude to the Military High Command for his nomination to lead the Battalion, and to the Army Peace Operations Training School (APOTS), BTC, for the support availed to GHANBATT 10, thus far.

Under the aegis of APOTS, GHANBATT 10’s preoperational training, which has basically concerned discipline, training, fitness, medicals and documentation, has seen its leadership together with assistance from the Military Higher Command, make efforts to ensure a smooth and successful period of stay.

The Battalion is already working at enhancement of feeding for All-Ranks, drilling of a bore-hole to augment water supply, provision of enough drinking water for all troops, and commencement of renovation works on the cookhouse and store rooms.