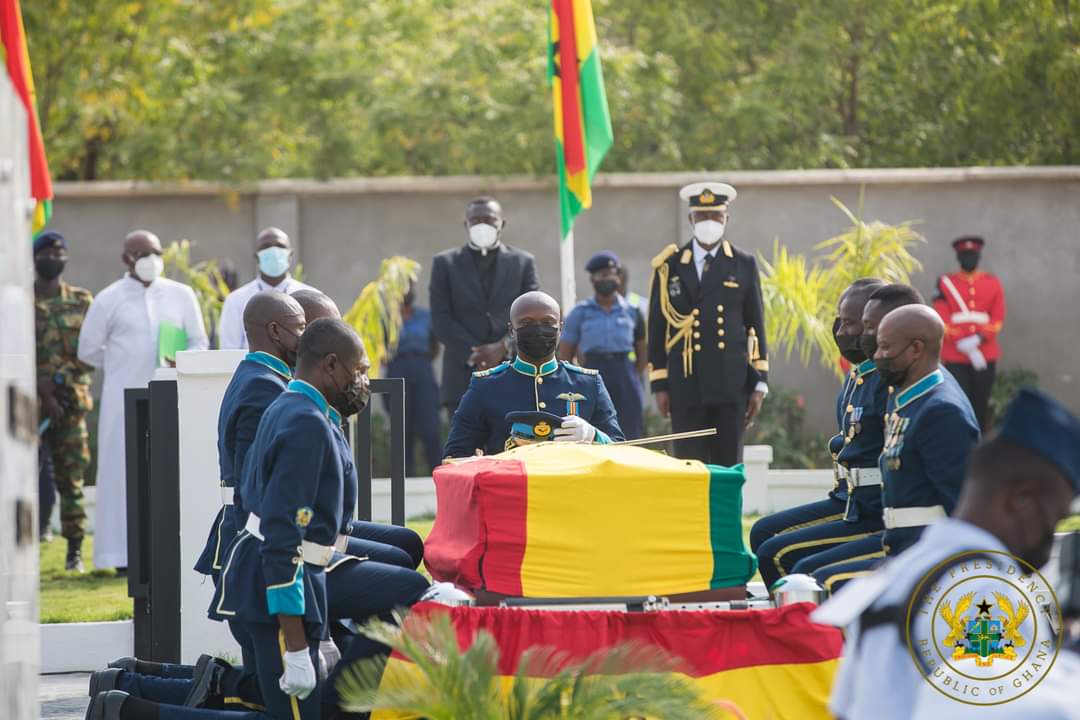 President Nelson Mandela said “when a man has done what he considers to be his duty to his people and country, then he can rest in peace – I believe I have made that effort and therefore, that is why I will sleep for the eternity”.

Any keen observer would agree that these words of Nelson Mandela, resonates equally with the life of His Excellency (HE) Flight Lieutenant (Flt Lt) Jerry John Rawlings, whom we mourn today.

The late Flt Lt JJ Rawlings, was commissioned into the Air Branch of the Ghana Air Force, as a Pilot Officer on 25th January 1969, on completion of his Basic Military Training, at the Ghana Military Academy (GMA).

His passion for flying was very evident, even as a very young officer, and the route to that realization was challenging, however, by dint of hard work and dedication, he successfully achieved that cherished objective.

Indeed, he was adjudged the BEST GRADUATING CADET the much-coveted SPEED BIRD TROPHY – an award which every flight cadet at the Flying Training School, Takoradi, dreams of.

His career as an Air Force officer begun at the Air Force Base, Takoradi, as a Squadron Pilot and over time, he distinguished himself as a Fighter Pilot, demonstrating his exceptional skills in Aerobatics, in addition to flying duties, as he was also the Base Adjutant.

His passion for precision and adherence to flying procedures, coupled with his dexterity at flying, earned him an appointment with the renowned No.4 Squadron, from 1971 to June 1979.

He simply loved his job as a pilot, for his Situational Awareness and rare skills with Cockpit Management in the art of flying, were exceptional, and he was also known for his love for other machines, especially motorbikes.

Whiles in active service, he accepted other Regimental assignments willingly, and always executed them to the required standards.

He was very firm, fair and straightforward on his principles, especially when it came to dealing with his subordinates, and he also exhibited good leadership qualities at the Flight Lines and at social gatherings.

The late former President, had an affable personality and his social etiquettes were that of an officer and a gentleman.

He was an ardent sportsman and particularly loved horse riding and boxing and he served on the Inter-Service Boxing Organizing Committee on a number of occasions, and as the Officer-in-Charge (OIC) of the Ghana Armed Forces Boxing Team, he led it to win several laurels, both home and abroad.

His involvement in the political history of Ghana is now legendary and hardly needs any repetition, for he was one who had a deep sense of patriotism and nationalism, and was very considerate of others, no matter their status in society.

His daunting spirit was unbreakable and could never be affected negatively by any task.

He will be remembered as the longest serving Head of State of Ghana and the architect of Ghana’s Fourth Republic, which has been the most enduring.

Most of the current serving personnel of the Armed Forces, never met President Jerry John Rawlings whiles he was in active service – they only know him from open sources as a revolutionary, and a democrat, who has left an indelible mark on the Ghana Armed Forces, and the nation.

One little known fact, is the Amendment of the Armed Forces Regulations on Discipline, in which the trial by a sole Commanding Officer (CO), was replaced by a Disciplinary Board – this was implemented by the late President and was informed by his empathy towards his subordinates and his sense of fairness.

President Rawlings was also the brain behind the formation of the 64 Infantry Regiment, and the extension of Serving Years from 18 to 25 years, until the recent further extension to 30 years.

At one time, Flt Lt Rawlings was once both the Chief of the Defence Staff (CDS) and the Commander-in-Chief (C-In-C) of the Ghana Armed Forces and was honourably released from the Service on 14th September, 1992.

President Rawlings was a quintessential lover of flying, a man with unflappable zeal and an unabashed democrat, brilliant, witty, with a gift of eloquence, sarcasm and humour, which came to him without effort or deliberation, thereby drawing crowds to himself.

The words of Williams Shakespeare in his book ‘Julius Caesar’, sum up the life of our departed President and statesman – “his life was gentle and the element so mixed in him that nature must stand up and say to all the world ‘this was a man’”

MHB 896 – Now praise we great and famous men, the fathers named in story, and who now, as then, reveals in man, His glory.