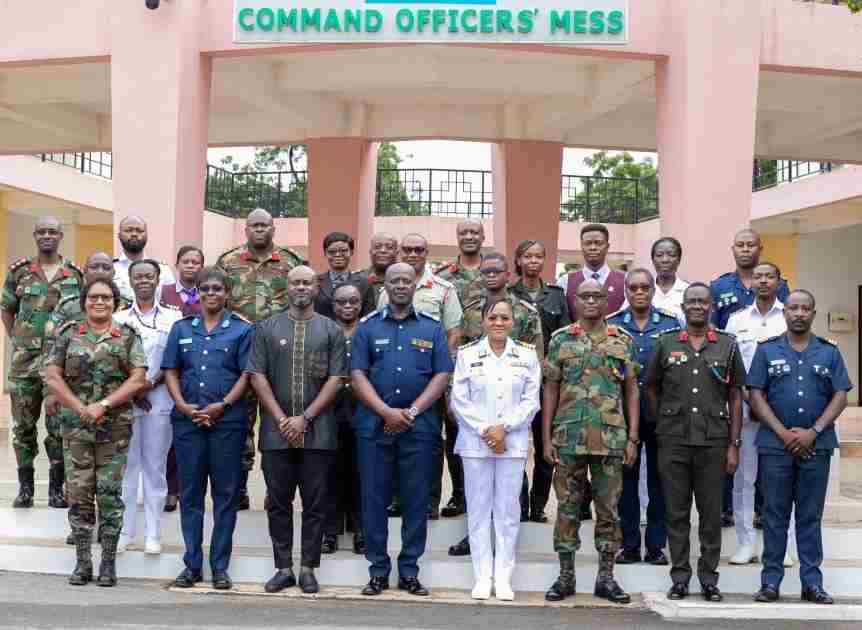 The Ghana Armed Forces (GAF) has held its Third Edition of Training Workshops for Gender Advisors, as a platform to share ideas on gender issues in order to deepen understanding, provide an overview of gender efforts and set the stage for their work.

The three-day workshop which commenced on Tuesday, 6 September, 2022, at the Command Officers’ Mess, Burma Camp, Accra, under the theme “Guaranteeing Equal Opportunities in the GAF”, had the Deputy Chief of Staff (DCOS), Administration, General Headquarters (GHQ) – Air Vice Marshal (AVM) Michael Appiah-Agyekum, as the Guest-of-Honour.

Giving a background of gender mainstreaming, AVM Appiah-Agyekum referred to 1995, when the Government of Ghana endorsed the Beijing Platform for Action, which required member-countries to take steps to ensure that gender perspectives were integrated into all institutions, and the United Nations Security Council Resolution 1325, which urges all to ensure women’s participation in decision-making, peacekeeping and peace building.

AVM Appiah-Agyekum called on the newly appointed gender advisors for the Services, Formations and Commands of GAF, to work hard to eliminate what he termed ‘subtle idiosyncrasies and prejudices, which are consciously or subconsciously perpetrated in GAF’, opining that gender mainstreaming is nothing new to Ghana Military’s respective ranks.

He said although discussions on gender issues always seem to be female-biased, due to the male-dominated environment coupled with Ghana’s socio-cultural background, gender matters emphasize non-discrimination against any sex, a fair call which the Military High Command (MHC) of GAF totally believes in.

The DCOS further stated that the MHC has worked hard to ensure the right gender balance in day-to-day decisions, operations and activities is achieved, which has resulted in GAF achieving approximately 18 per cent of its manpower being female, adding that GAF continues to send female Officers to all Units, so that in due course, female Officers could be commanding fighting units and Combat Teams.

In international peacekeeping, he stated that Ghana has the highest deployment of female personnel, averaging 15% for Contingents, 27-30% for Military Observers and Staff Officers, and GAF remains the first military in the world to have subjected itself to Canadian Government’s Elsie Initiative, through Measuring Opportunities for Women in Peace Operations.

AVM Appiah-Agyekum defined the work of the Gender Advisors as 1) to work hard to eliminate all negative mindsets, practices and cultures that do not enhance harmonious co-existence, 2) being key links between the vision of the MHC and the actual implementation of gender mainstreaming, 3) equipping and facilitating the effective functioning of gender focal points (persons) in all Units and 4) prompting the MHC and Formation Commanders on gender issues.

The Gender Policy Advisor to the Chief of the Defence Staff of GAF – Naval Captain (Capt GN) Veronica Arhin, said since 2018, GAF has stepped-up efforts at creating a fairer working environment tor personnel, among which include the appointment of Gender Advisors at the Service, Formation and Command levels as well as Gender Focal Persons at the Unit level.

Capt (GN) Arhin also hinted that a GAF Draft Gender Policy has been completed for processing, however hinting that the policy would not be for Women Empowerment, but for Gender Mainstreaming, and would include a proposal for Paternity Leave.

In a discussion which was orchestrated by the Facilitator for the workshop – Dr Fiifi Edu-Afful – Research Fellow at the Kofi Annan International Peacekeeping Training Centre (KAIPTC), the participants made diverse views which included the following:

1) There cannot be a good gender mainstreaming policy without considering the culture of the people, for the GAF belongs to Ghanaians.
Women, generally, influence the Ghanaian society and the behavior of men, who would change towards gender mainstreaming, if women change as influencers.

2) The “Girl-Child” policy, initiated from 1995, seems to have worked to the detriment of “Boy-Child” education, judging from recent reports and performances of both sexes, academically.

3) The efforts of gender mainstreaming, should not seek to make all females to be legendary Yaa Asantewaa and other outstanding females of the Ghanaian and African society, but rather help create the environment to help women give out their best in developing society, out of which legendary women would naturally emerge.

4) GAF gender policy should guide female professional soldiers into Combat Teams, as Western militaries obtained their status quo through the process of time and policies.

5) Armoured Training School in Sunyani, has for year 2022, recruited 38.6% females who are under training.

6) In certain professions, such as Nursing, males are also discriminated against
Female personnel of GAF should be made to work like their male counterparts without any undue advantages, irrespective of their conditions; any acts of discrimination should be positive, deliberately targeted at achieving equity, so that at deployment, they would be available for selection.

The workshop is actually the fifth workshop/seminar being held at the GHQ level – a high-level gender conference for Formation Commanders and above, and a seminar for Directors and Principal Staff Officers from the Services and GHQ had been held earlier, there also have been two other workshops for the predecessors of the 3rd Gender Advisors’ Training Workshop.

“Irrespective of one’s sex, we all have potential capabilities which need to be properly harnessed and integrated for a balanced development of the Ghana Armed Forces. This is what gender mainstreaming seeks by offering opportunities for all” – Lt Gen Obed Boamah Akwa (Rtd), Former CDS, GAF.

“I look forward to when decision makers at all levels do not see the strength of our Armed Forces in terms of only male members; where personnel do not perceive their female counterparts as a burden; and where females do not see themselves as weak and only here to support their male colleagues and therefore deserve special dispensation” – V/Adm Seth Amoama, CDS, GAF.