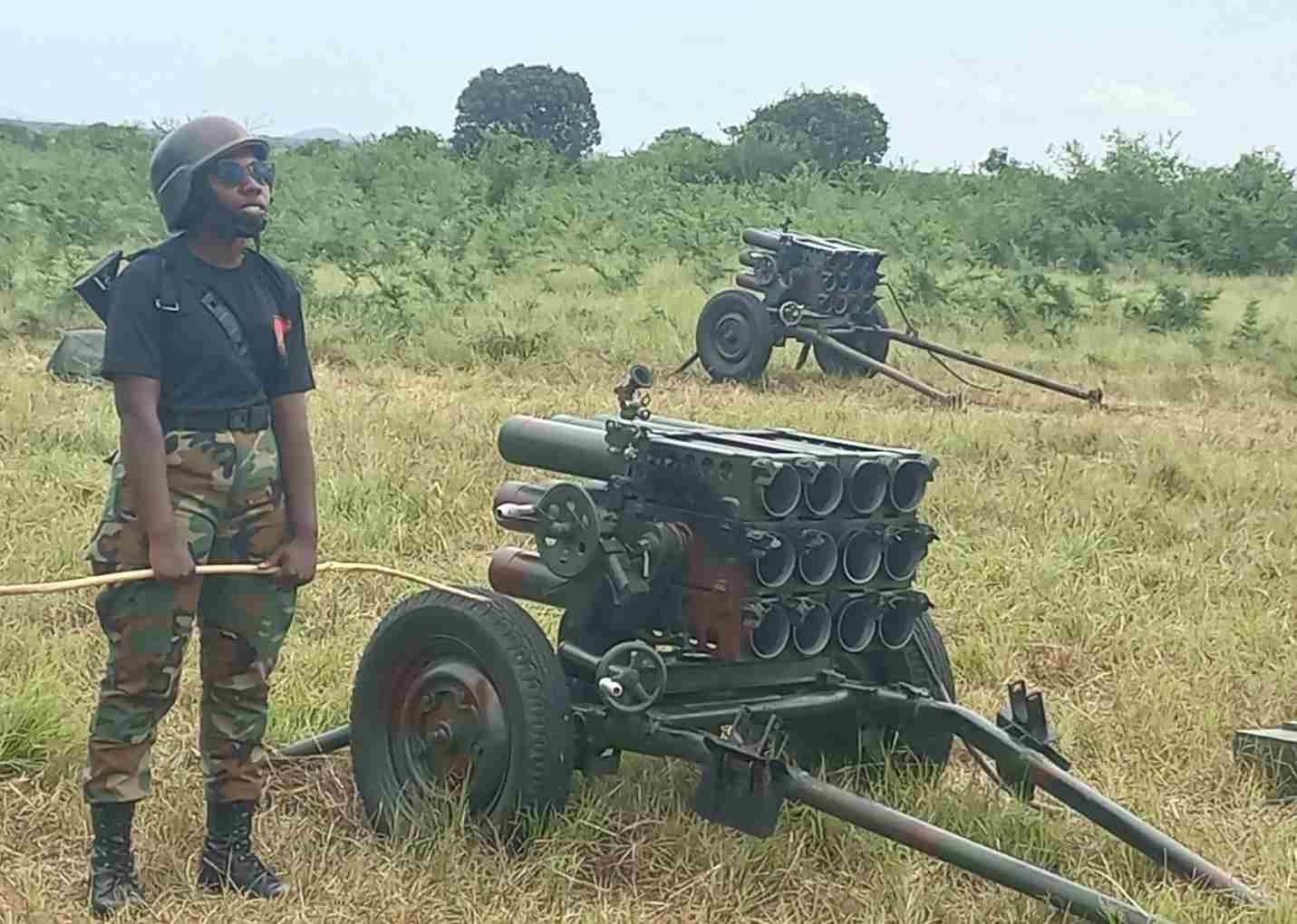 This year’s LCFD was held on the plains of Bundase and Shai Hills, on Friday 28 October, 2022, where the live firing exercise was observed from a hill (SMALL BUNDASE) overlooking the plains, by 86 Senior Command and Staff Course 44, which has Senior Military Officers from Benin, Botswana, Cote d’Ivoire, Liberia, Malawi, Namibia, Nigeria, South Africa and GAF.

Presenting an opening address, the GOC, Southern Command, Ghana Army – Brig Gen Michael Amoah-Ayisi said the Armed Forces are the last resort as far as internal security operations are concerned. He stated that recent disturbing incidents involving some secessionist groups from the Eastern part of Ghana, has caused an awakening, thus the LCFD ’22 seeks to demonstrate the resolve of GAF to deal with such threats.

The Chief Instructor, Joint Studies, GAFCSC – Colonel (Col) William Kwabiah, said GAFCSC as a higher institution of learning that trains Middle to Senior Level Officers of GAF and other Allied countries in Africa, aims to come up with strategic leaders who may take up their organization in their countries at the strategic levels and lead.

As part of the curriculum, the Military University College annually organizes the LCFD Exercise, hence although the training is for GAF, it is aimed at exposing students of the Command and Staff College Senior Division, to how operations can start from the Tactical level, dovetail into the Operational level, and its implications for Strategic levels, he said.

Col Kwabiah added that the exercise also aims at demonstrating how interoperability between the Army, Navy and Air Force can be achieved to attain synergy, and that contemporary threats confronting Ghana are similar to what other countries in the subregion face.

He said the take-home for the LCFD ’22 has been the inculcation of a casualty management into the exercise. The exercise brought out how the Air Force, the Army and other support elements, could be used to transport casualties from the point of injury, up to the level where they can receive the utmost care.

LCFD ’22 was exercised based upon FICTITIOUS NAMES in the summarized scenario below:

“Ghana, the most stable country in the West Africa, notwithstanding the political and economic gains made by its successive Governments, has activities of a secessionist group – Redemption of Motherland Group Foundation (RMGF – fictitious name) as a bother.

The demand of the Group is to secede the Volta, Oti and parts of the Northern, Northeast and Upper East Regions from Ghana to form the WESTERNLAND, with an added aim of gaining access to the mineral deposits along the Eastern corridor of Ghana. A decisive response by GAF curtailed the activities of the Group and they went underground.

On 7 May 2019, the leader of the group and some of its members were granted bail after being arrested and charged with conspiracy to commit treason felony, abetment of unlawful training, unlawful assembly and offensive conduct to breach the peace of Ghana.

A bigger group, from whom the RMGF took inspiration, energized the latter and served as catalyst for the RMGF to rekindle their activities against Ghana.

The Commander-In-Chief of Ghana’s Armed Forces directs its Ministry of Defence, and subsequently the CDS, to reinforce troops and deal with the multiple threats by the militarized RMGF, after several diplomatic overtures failed, as the group took inspiration from happenings in Mali, Burkina Faso, hence Ghana’s National Counter Terrorism Centre (NCTC) was to be fully operationalized in OPERATIONS FATHERLAND.”

Lieutenant Colonel (Lt Col) Dominic Ampomah – Commanding Officer (CO) of the lead Battalion of the BG (Joint Task Force TARANTULA) for the LCFD, conducted the orchestra for unison for various facets of the battle into 3 main areas namely the Artillery Gun Lines, the Administrative Area where the Static Display of the various weapons, equipment and Command post, were at play.

With the part of the framework involving land battle, the Infantry, Mechanized Infantry and Artillery Forces, supported by elements of the Armour Brigade, conducted Deep, Close and Rear Operations, to defend national assets, isolate targets, neutralize threats, and prevent reinforcement of Aggressor Forces.

The Aggressor Forces used remote controlled improvised explosive devices (RCIEDs), as one of the new and effective weapons, which has generally led to massive damages and heavy casualties to many militaries and civilians in recent years, thus, as part of Electronic Warfare Assets, the BG deployed Fighter Aircrafts, unmanned aircraft vehicles (UAV – drones), Artillery and missile systems and 2 Electronic Counter-Measure Equipment, to avert RCIEDs threats and also jam the adversary’s communication.

48 Engr Regt – the electrical and mechanical engineers carried out Rehabilitation Operations, as well as health services to ensure that the reinforcement holding unit for logistics, was in place.

Then there was the spectacular enactment of the BG Armoured Personnel Carrier (APC) Ambulance CASEVAC and BG Rapid Assistance Point (RAP), where immediate First Aid, Casualty Evacuation and Medical Evacuation (MEDIVAC), are promptly conducted on the battle field to save the lives of soldiers when they are injured.

For the best chance of survival and recovery, casualties are treated within the medical “10-1-2 hour principle” – (i) 10 minutes – that is the Enhanced First Aid administered by personnel trained in military first aid. (ii) 1 hour – Damage Control Resuscitation (DCR) is administered by emergency medical personnel within 1 hour of wounding, which is performed by the Pre-Hospital Emergency Care (PHEC) Capability 3, complemented by a consultant-led team in an appropriate platform.

(iii) 2 hours – Damage Control Surgery (DCS); casualties that require surgery are placed under treatment in a facility manned and equipped for this, within 2 hours of wounding.

The GAF, through various platforms in recent times, has raised high its levels of preparations against any potential acts by Violent Extremist Organizations, Terrorist Armed Groups, Transnational Organized Crime actors and any acts that would compromise the internal security, territorial integrity or acts of aggression, through conventional or asymmetric warfare, against the sovereignty of Ghana.