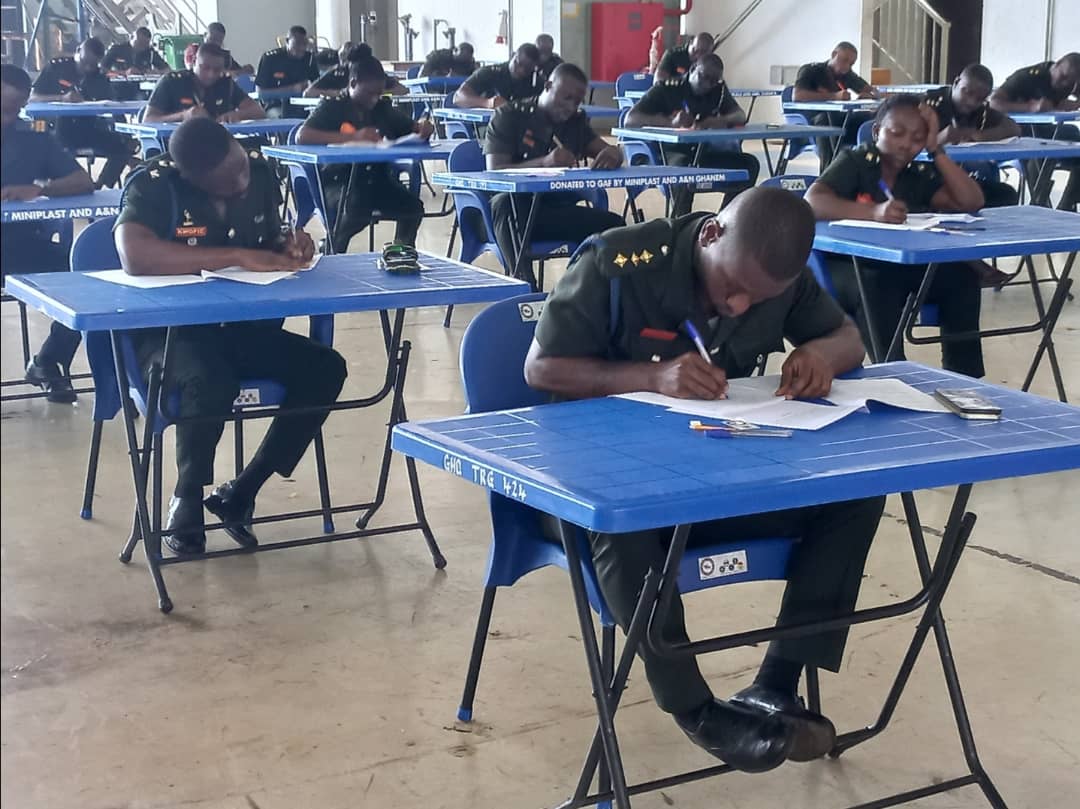 On the penultimate day of the examinations, Friday, 10 June, 2022, the Chief of the Army Staff (COAS) – Major General (Maj Gen) Thomas Oppong-Peprah and the Chief of the Air Staff (CAS) – Air Vice Marshal (AVM) Frank Hanson, visited the Accra venue, to witness the process and to wish its Two Hundred and Ninety-Two (292) candidates the best of luck.

Giving the Press a flip-over of the examination, Brigadier General (Brig Gen) Anthony Ntem – Commander, Army Signal Brigade, and Chief Invigilator for the GAF OFFICERS’ PROMEX 2022, simplified the intricacies of the process.

Other Officers who undertake the PROMEX are Officers who have covered their required number of years at the Ranks of Captain (Army) and its equivalent in the Navy and the Airforce, who are rising to the Ranks of Major (Army), Lieutenant Commander (Navy) and Squadron Leader (Airforce).

This year’s PROMEX commenced on Monday, 6 June, 2022 and ends on Saturday, 11 June, with candidates writing one paper each day, but for Friday, when they write 2 papers.

General Ntem stated that the papers under examinations were TAC A, TAC B for Army Officers (Infantry and Armour), one for Air Force, another for the Navy, TAC C, Special Arms for Engineers, Signals, Pay, Public Relations, Legal Practice, Medical Officers, Military History and Air History, Admin and Morale, Current Affairs, Military Law.

The Chief Invigilator explained that military examinations in Ghana are such that; if a candidate writes all the 7 subjects and is successful, depending on what one is engaged in, then they do not write again for that level, however, Officers who write in a particular year, but are referred in one paper, have to join the proceeding year group to rewrite – if one fails more than one paper, then everything has to be rewritten.

There are 3 phases of examinations for promotion at the two levels stated above; – 1) Practical/Field Promotion Examination, 2) Battle Fitness Test – physicals (3.2 kilometers timed running, pushups and sit-ups), with the last stage being the theoretical Promotion Examinations – PROMEX, successes in all three areas, qualifies the Officer for promotion to the next Rank, and that is a process through which every Officer in the Ghana Armed Forces passes.

Subsequent promotions to higher ranks for the successful Officer, are dependent on factors which include he/she having to work on their mandatory Courses, their work output and reports.