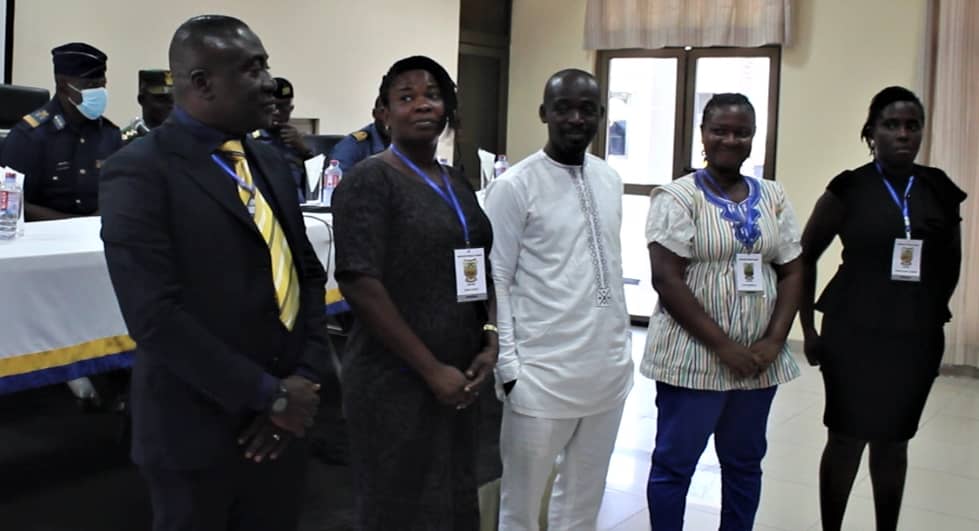 The Ghana Armed Forces (GAF) has launched the Defence Press Corps (DPC) to augment the qualitative and quantitative media coverage of all publishable activities of the Ghana Army, the Ghana Navy and the Ghana Air Force, in the mass media.

The event, which took place on Friday, 22 April, 2022, at the Multipurpose Hall of the Forces Pay Regiment, Burma Camp, entailed the elections for the 5-member Executive Council (EXCO) of the Corps, the adoption of a constitution, swearing-in of the EXCO and the outdooring of a logo, with the Guest-of-Honour being the Deputy Chief of Staff (DCOS), Administration, General Headquarters – Air Vice Marshal (AVM) Michael Appiah-Agyekum.

In a speech, the DCOS said the GAF well understands that its pursuits are scrutinized, interpreted, judged and understood through the mass media, which applies images and narratives, to communicate their outputs to the general populace and the world at large.

AVM Appiah-Agyekum who described the media, as indispensable actors in the State space, who inform, educate, entertain, persuade, surveil, interpret and socialize the general populace, also spoke of the need to progress to the realm where no respectable news organization has any interest in endangering soldiers or operatives, so that national security is compromised.

The situation must be minimized, whereby the media tends to view the military as doing everything possible to justify their actions in order to avoid publication of anything that would put GAF in a bad light, while the military, in turn, view the media as a group driven by market pressures, and only interested in “breaking news” or sensational headlines for survival, he said.

The DCOS stated that the Armed Forces and the media are two critical actors of the concept of instruments of national power; where diplomacy, information, military and economic power (DIME) are tools that collaboratively, could be used to assert might, influence, development and a sustainable democracy.

He further urged media organizations in Ghana, to institute dedicated journalists in defence reporting or as defence correspondents in their setups, to curb the phenomenon where incorrect reporting of rank designation, units and type of military operations, clear untruths, half-truths and rumours are published.

The President of the Ghana Journalists Association – Mr Roland Affail Monney, who swore in the EXCO, also charged the entire Corps to abide by the ethics of the Association and maintain the respect they have so far gained with GAF.

The Dean of the DPC – Kofi Ampeah-Woode, in an opening address, said the Corps is made up of over 35 journalists from various television, radio, newspaper, online and social media houses, the core of whom have been directly trained by the Directorate of Public Relations (DPR), and are dedicated to regularly provide media support.

He said the recent antecedents of the corps could be traced to the aftermath of the 2017 Exercise Tiger’s Path, where in September 2017, a number of journalists were asked by the then General Officer Commanding, Southern Command, Ghana Army, now Chief of the Army Staff – Major General Thomas Oppong-Peprah, to form a regular team that would be familiarized with the ways of the military.

He continued that the General further offered to embed journalists who would avail themselves for the coverage of a series of one-week field exercises (EX STARLIGHT STRETCH 2017) of the command organized for all units of the Southern Command; and that team of journalists who accepted the offer, would end up being the core of the present day DPC.

The General would follow up, in that same year, with an intense two-day military/civil journalists’ cadre organized at 48 Engineer Regiment to orient the civil press and staff of DPR, and was lectured by Naval Captain Michael Larbi, Colonel Eric Aggrey-Quarshie (DPR), Colonel Isaac Amponsah (then Command Operations Officer, S/COMD) and rounded up by the then GOC himself.

The second Cadre would follow later at the Command Mess, Burma Camp, on Wednesday, 18th November, 2020, as part of Operation Peace Trail, ahead of the General Elections of 2020.

The Corps leader, expressing the importance of establishing the team, opined that in safeguarding Ghana’s boarders, running internal security and anti-illegal mining operations etc, the GAF is at the battlefield and that concerns society who would want to be informed; thus, the media would be there to report to society, however, how information from those fronts would be presented, validates the establishment of the DPC.

He called for support to facilitate the DPC to take care of its own welfare issues and to create a dignified identity of the journalist, stressing that, if well nurtured as an institution, the DPC would grow to outlive generations and cure a lot of misconceptions of the civil populace of the military and vice versa.