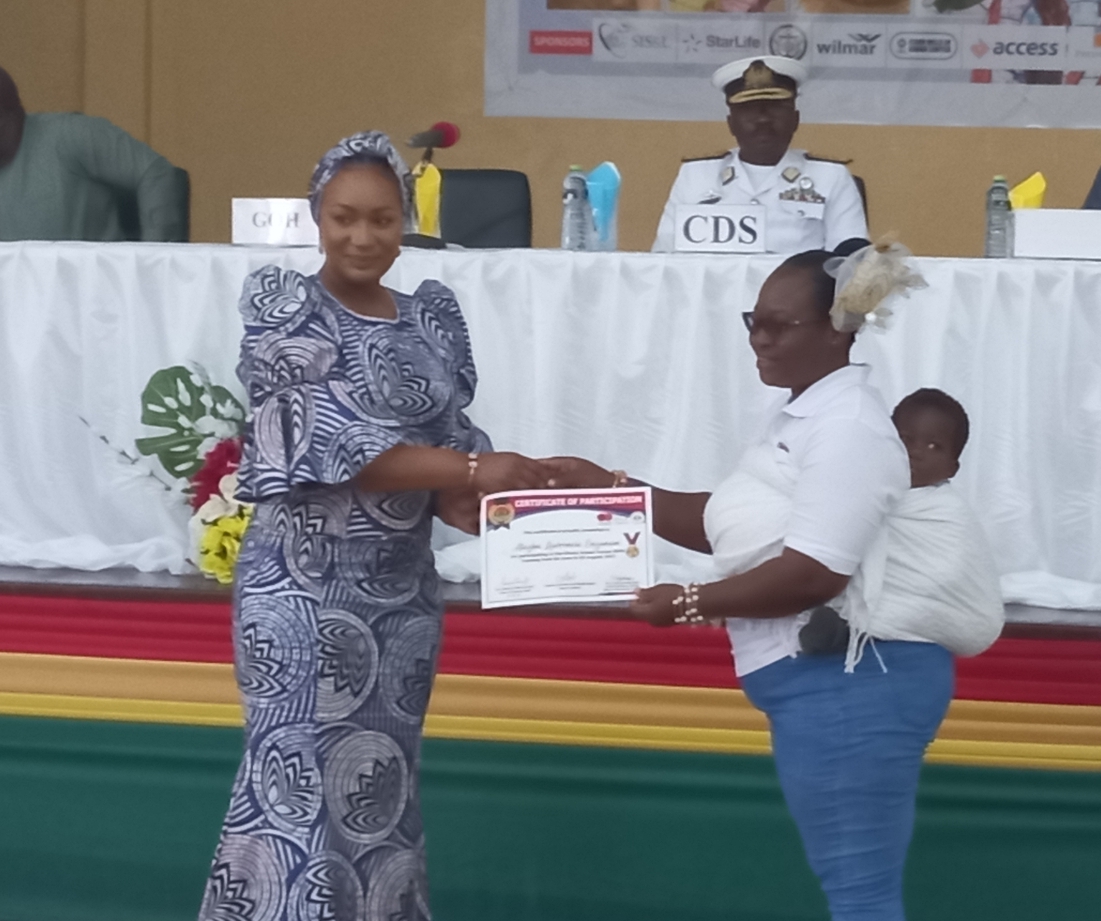 The Ghana Armed Forces (GAF) has rounded up a 9-week skills acquisition training program for over 5,000 female spouses of military personnel, their dependents, some female personnel of other Security Services, Defence Civilian Staff, as well as some female civilians in and outside military barracks, in all seven Garrisons.

The closing ceremony and a showcase for products of the acquired skills, were held on Friday, August 5, 2022, at Burma Hall, Burma Camp, Accra, with the Guest-of-Honour being Her Excellency (HE) Samira Bawumia – the wife of Ghana’s Vice President – HE Alhaji Dr Mahamudu Bawumia, and Special Guest being Mrs Kosi Yankey-Ayeh – the Chief Executive Officer (CEO) of the Ghana Enterprises Agency (GEA).

The 9-week training dubbed Command Skills Training, which targeted four thousand (4000) persons, eventually impacted over 5000, was intended to equip the women with skills to enable them support their husbands during their active Service time and on retirement, thereby increasing financial support to their households.

Delivering her address, HE Madam Bawumia, who averred that the effort of the Military High Command (MHC) would bring hope and joy to the homes of the trained, howbeit, urged the beneficiaries to be conscious that their individual successes with the imparted skills, would not be determined by what they had been taught, but by what they do with the knowledge so acquired, how well they apply it, and how far they are willing to go to achieve success.

She singled out for high mention two of the beneficiaries – one Mrs Lilly Edem Kwao-Hotor of the Electricity Company of Ghana and her daughter – Olivia Eyram Hotor – who would travel from Koforidua, on all the Saturdays the trainings were held, just to study and go back.

In his welcome remarks, the Chief of the Defence Staff (CDS), GAF – Vice Admiral (V/Adm) Seth Amoama said the motivation of initiating the program stemmed from his concern for avenues to improve and support the livelihoods of GAF personnel and their families at the barracks; hence, in September 2021, the MHC tasked a National Coordinator and an Organizing Committee to implement the idea.

The Command Skills Training which was organized in phases, had Phase I being sensitizing all troops, Defence Civilian Staff and spouses across the seven garrisons of GAF, with Phase II entailing the mobilization of financial and material support, as well as carefully selecting professional facilitators, and Phase III being the training itself, which commenced on the 6 June, 2022, the CDS intimated.

The CEO of GEA, stated in her remarks that her agency has the mandate of creating a vibrant entrepreneurial economy, by fostering the growth and development of Medium, Small and Micro Enterprises (MSMEs), and facilitating the provision of business development programs and integrated support services for them, thus their participation in the Command Skills Training.

The Special Guest further stated, referencing the World Bank that; to succeed in the 21st Century Labour Market, one needs a comprehensive skill set composed of cognitive, socio-emotional, technical and digital skills, which would contribute to structural transformation and economic growth, and help countries to become more competitive.

Mrs Yankey-Ayeh encouraged the beneficiaries to visit any of the GEA’s 16 Regional, 209 District Business Advisory Centers, and 67 Business Resource Centers across Ghana, for more business development support services, where a team of experienced business development advisors, who can coach, handhold and mentor beneficiaries for success in their endeavours, in addition to them benefitting from capacity building programs and affordable financing for business growth.

As part of the Command Skills Training, beneficiaries had the opportunity to interact with relevant state authorities such as the Food and Drugs Authority (FDA) and the Ghana Standards Authority (GSA), to ensure the safety and quality of their products.

The beneficiaries were segmented into 8 groups which were labelled as MANOUVRES, FALCONS, UBUNTU, FLYERS, ROYALS, SAILORS, UNISON and ANCHOR.

Other dignitaries present included the Deputy Minister for Defence – Mr Kofi Amankwa-Manu, Service Chiefs of GAF, the Chief of Staff, General Headquarters, Senior Officers of GAF, amongst many.