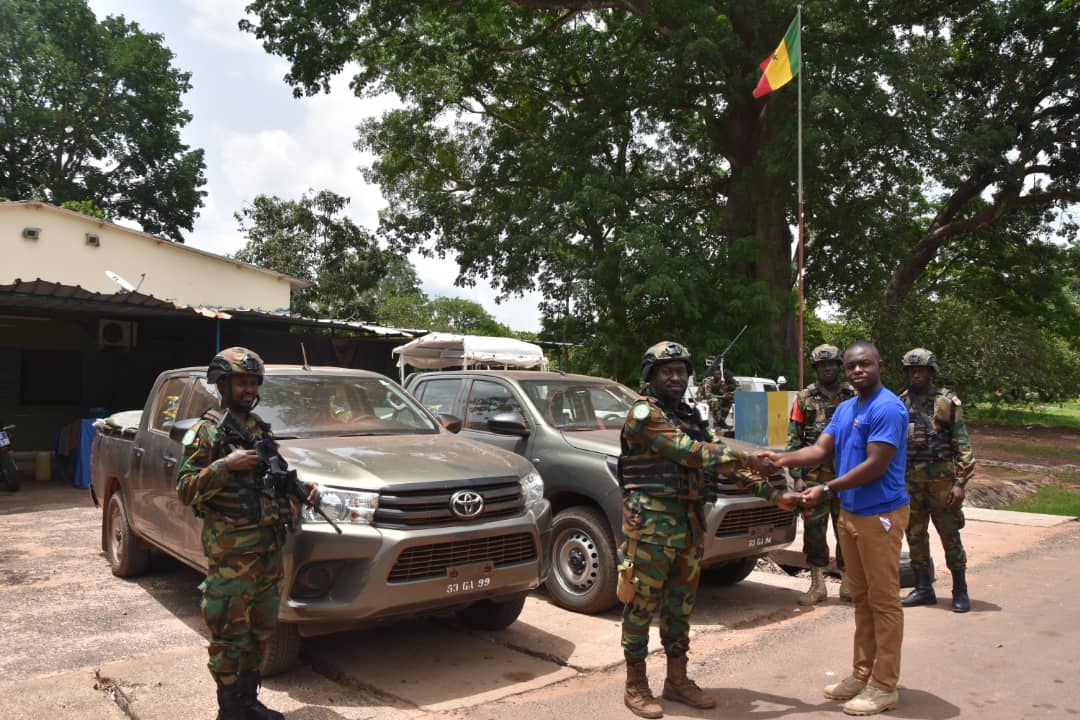 The Ghanaian Contingent deployed with the ECOWAS Mission in The Gambia (ECOMIG GHANCOY 6) on Wednesday 6 July 2022, received two brand new Toyota Hilux Pick-Ups and logistics including medical supplies from the Ghana Armed Forces.

ECOMIG GHANCOY 6 received the items via the Ghanaian Contingent deployed with the ECOWAS Stabilization Support Mission to the Republic of Guinea-Bissau (ESSMGB GHANCOY 1).

In a statement to the press, the Officer Commanding ECOMIG GHANCOY 6, Lieutenant Colonel WAK Ackah expressed his appreciation to the Military High Command for their timely response in addressing the logistic needs of the Unit.

He said the vehicles and other stores will help enhance the operations and administration of the Contingent whilst commending troops of ECOMIG and ESSMGB for their high level of professionalism which contributed to the successful movement of the logistics.

He also entreated his personnel to take very good care of vehicles and other logistics in their care to ensure longevity.

Furthermore, Lieutenant Colonel Ackah thanked the ECOWAS Resident Representative in The Gambia, Senegal Ambassador to The Gambia, Gambian authorities, the ECOMIG Deputy Force Commander as well as personnel of ECOMIG Senegalese and Nigerian Contingents for facilitating movement of his personnel and the successful receipt of the logistic supplies at the Guinea-Bissau border.

“I sincerely appreciate the efforts of ESSMGB Force Commander, Brigadier General AM Grema and ECOMIG Force Commander, Colonel Cheikh Omar Tamba for ensuring the swift and successful movement of the logistics across three international borders seamlessly” he said.

He also noted with thanks to the Commanding Officer of ESSMGB GHANCOY 1, Lt Col D Korsah for the tireless effort and extra length he went to bring the logistics barely three days of his arrival in Guinea-Bissau; despite the huge task of ensuring deployment of his new Unit.

“Generally, our collaboration in the quest for enhanced democracy and security in West Africa in general and The Gambia and Guinea-Bissau in particular is commendable and this must be consolidated with more cooperation in the periods ahead between the two missions”, he added.

Following a visit by a Technical Team from the Ghana Armed Forces to the ECOWAS Mission in The Gambia, it was observed that the Ghanaian Contingent needed a number vehicles and other logistics to enhance their operations.

To this end, the vehicles and other logistic supplies were shipped to Guinea-Bissau as part of supplies for the maiden ESSMGB GHANCOY 1. On 6 July 2022, some personnel of ECOMIG GHANCOY 6, led by Captain Dela Foli and under the escort of their Senegalese counterparts met personnel of ECOMIG GHANCOY 1 at the Senegal-Guinea Bissau border town of Mpak for collection of the items.

The deployment of Ghanaian peacekeepers in The Gambia was part of ECOWAS’s military intervention codenamed OPERATION RESTORE DEMOCRACY; launched on 19 January 2017 to deal with the political crisis that emanated from refusal of former President Jammeh to accept defeat in the 1 December 2016 elections.

The mission has over the years enjoyed enormous cooperation from the Gambian Defence and Security Forces and the good people of The Gambia in the successful execution of its mandate as enshrined in its concept of operations.