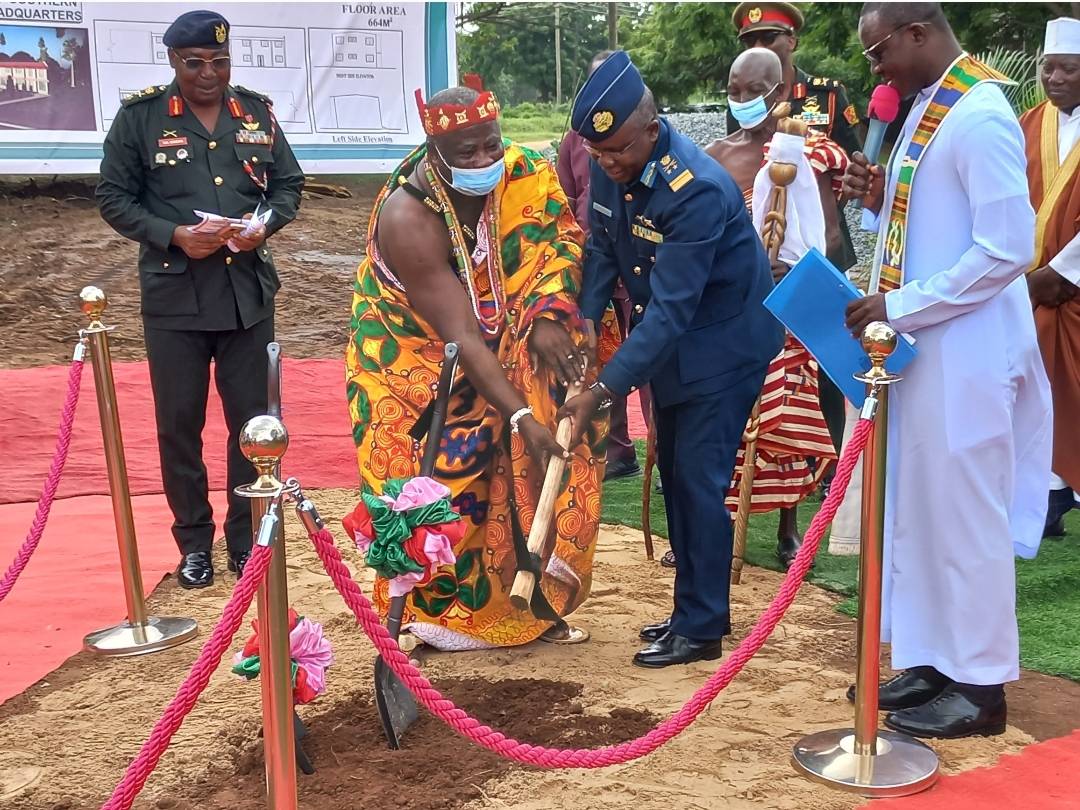 In anticipation of being upgraded from Formation to Divisional Headquarters (HQ), and the implementation of the Continental Staffing System, Southern Command (S/COMD), a formation of the Ghana Army, has cut sod for the construction of a 100-seater Conference Room, a 150-seater Auditorium and offices, to expand its headquarters.

The sod-cutting event was held on Wednesday, 22 June, 2022, at the S/COMD HQ, Teshie Ridge, with the Chief of the Air Staff (CAS) of the Ghana Armed Forces (GAF) – Air Vice Marshal (AVM) Frank Hanson, representing the Chief of the Defence Staff (CDS) – Vice Admiral Seth Amoama, as the Guest-of-Honour, for the project which is expected to cost about GHS2,351,000.

AVM Hanson said the project is another giant step in the Formation’s drive to expand and modernize the Command HQ building, after commissioning of a 124-bed accommodation transit quarters to augment its accommodation facilities in the unit, just about five months ago.

AVM Hanson stated that it is common knowledge that office space unavailability, continues to be a major challenge of GAF, and the expansion of the Headquarters office infrastructure to improve the office conditions of staff, conforms to the vision of the CDS; which is the restructuring and modernization/expansion of GAF, to meet contemporary security challenges facing Ghana.

The CAS further stated that the Government, through its Barracks Regeneration Program, has made efforts to bridge the accommodation gap by building accommodation facilities in the various units, which is being complemented by various commands and units in the Ghana Armed Forces.

He commended the Chief of the Army Staff – Major General (Maj Gen) Oppong-Peprah, for the massive self-help projects he initiated during his tenure as the General Officer Commanding (GOC) of the Formation, which was sustained by Maj Gen Abraham Yeboah Nsiah, and is being taken to the next level by Brigadier General (Brig Gen) Michael Amoah-Ayisi, the current GOC.

General Amoah-Ayisi, in his welcome speech, stated that the project is a self-help project and that friends of the Armed Forces, philanthropists and benefactors of the Formation, are welcome to contribute into completing the project, which will eventually bring in more Staff Officers to the Command.

Construing the essence of the project, the GOC said currently, the Command Headquarters holds conferences and meetings in its operations room, with representatives of civilian institutions and officers of other security agencies from the Command’s Area of Operations; which covers the Western, Western North, Central, Eastern, Oti, Volta, and Greater Accra Regions.

General Amoah-Ayisi said there is always the issue of limited space of the Command Operations Room, and the high tendency to compromise the Security of information and other classified documents, when such conferences are held.

The project, which was designed to occupy a gross floor area of 664 M² by PROLICON PLUS LTD, will be constructed by same, led by its Chief Executive Officer – Mr Sampson Opare-Agyemang, who is a friend of GAF, who took time to present a brief of the facilities of the extension, and will work together with a Project Implementation Committee headed by the Command Logistics Officer.

Units under S/COMD are the 1, 2 and 5 Infantry Battalions, 66 Artillery Regiment and the 48 Engineering Regiment, and per the expansion drive of the Military High Command of GAF, if upgraded to a Division, the Army branch would operate with three Brigades/Formations, thus many Officers would be required.

The Continental Staffing System – which GAF operates now – is an international standardization system that regulates appointments of Officers/Staff and helps in standardization and comprehending multinational operations, as opposed to the former system (NATO System) that GAF operated.